Secret societies have been around as long as civilization itself, if you believe in a hidden hand manipulating the world or that the certain groups of people have information that is purposely  being hidden from the public you are far from wrong.

There have been hundreds of secret groups formed for a multitude of reasons, by the very nature of them being secret we can never know the true number.

Sometimes the truth leaks out, cases like Gary Mc kinnon and famously Bob Lazar among many, many other whistle-blower's, hackers and supporters of the idea that it is the right of all to know the secrets that are being kept. 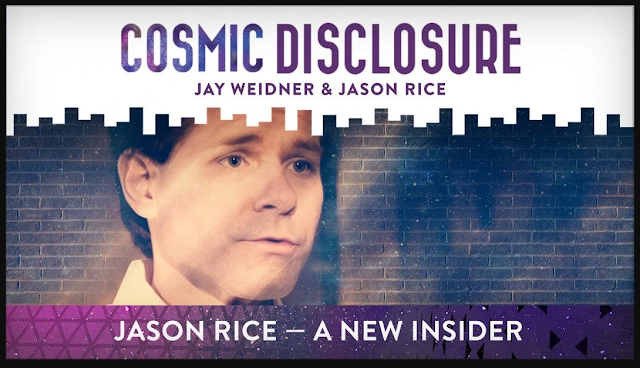 A new insider has come forward to reveal his experiences within the Secret Space Program. Jason Rice is a veteran of the 20 & Back program which has sent many unsuspecting “volunteers” on a shocking tour of duty through the cosmos. Much of what he brings forward corroborates the testimonies of several other SSP whistle-blowers.

Jason claims he was identified as an intuitive empath known as an (IE)  and enrolled into the experimental behaviour study and recruited into a MILAB program in 1977, where he worked and trained alongside other gifted children in Jacksonville, FL.

1986 marked the end of an eight-year MILAB training regimen and, at the age of 13, he was assigned to active duty in a '20 and Back' program.

Jason began specialized training in 1994 to serve as an officer in the ground forces of the Interplanetary Defence and Reaction Forces (IDARF) secret space program while he was a student at Florida Tech.

Jason wrote a statement before he went public it says:

No One Owns Disclosure.

Many people do not know who I am so let me share a few words of introduction. My name is Jason Rice and I recently came into public awareness on the Gaia series, COSMIC DISCLOSURE. This is the platform that I chose to go public for the first time about my experiences in MILAB and SSP programs. At risk to my personal safety and my professional life working as a multi-discipline Civil and ElectricalEngineer for over 21-years, I decided in 2017 to go public because I feel it is time to disclose my involvement in ongoing unacknowledged special access programs with the explicit hope of contributing valuable information to the Disclosure effort.

When deciding upon going public with my experiences, I was fully aware of the potential ramifications from various government and non-government agencies involved with the SSP. The agencies’ typical whistleblower discredit playbook includes the usual media manipulation, civil legal actions, slander, ridicule, and even perhaps, threats as a result of my coming forward. I did not, however, imagine that another SSP veteran would fulfill the role of bullying, ridicule, civil legal action and manipulation of the alternative media to further a narrative, agenda and/or opinion. At 10:46 a.m. (PST) On October 3, 2018 I was served with a legal letter from the attorney of James Corey Goode mere hours before my interview with Jimmy Church on Fade to Black. A copy of the letter is included with this article. The main goal of coming forward with my experiences is about contributing to the goal of full disclosure. There are many voices out there who have spoken about the SSP and other classified programs that date back to the late 1980s. Many more are in a position to come out but arecautious because of the ridicule and overtly aggressive behaviors from within the truth seeker community, not to mention the very real threats from and targeting by SSP involved government and non-government agencies alike. Whistleblowers and Insiders have a tremendous amount of information to contribute.

The SSP-puzzle has many pieces and many compartmentalized parts. I do not pretend to know all the thousands of people that have been/are involved. This secrecy within the SSP is deliberate in order to specifically restrict knowledge in the event of leaks and/or whistleblower testimony. There are many factions with assets, people, interests and agendas in the SSP. The best thing we can do to further the disclosure movementis to encourage those who are willing to come forward to do so. This movement is far bigger than any one person, group, narrative or interest. In September 2017, I was invited by Gaia to be a guest on Cosmic Disclosure. I was told shortly after that Corey Goode refused to appear with me on the show. Gaia conveyed my offer to meet and discuss my experiences, but this opportunity was declined by Corey Goode. I am not alone in this arbitrary “blacklisting” experience either.

The SSP whistleblower community is growing and there is a shared bond among the veterans of these programs. As an SSP veteran, I can tell you from personal experience how appreciative and thankful I am of those who went public before I did. These include Mark Richards, Randy Cramer, Tony Gonzales, Michael Relfe, Aug Tellez and many, many others. Thousands have been and are currently participating in Secret Space Programs around the globe. For them to express their personal experiences and testimonies does not equate to plagiarism. To be clear, I do not harbor any ill feelings or intentions towards Corey Goode. I also do not ask for, condone or support any acts of violence, bullying or vigilantism. It is my hope that bringing these issues into the light will generate meaningful, loving and respectful discourse about the strength of many voices and to end all attempts at securing intellectual property protection of common use terms  by anyone.

I am sincerely grateful for the opportunity to disclose my SSP experiences and genuinely encourage other whistleblowers to come forward and share their own.I ask for your support by reposting this article (without changing the content) and by proclaiming that no one owns disclosure. The control of these terms should not rest in the hands of one person, group or corporation to decide what is and is not deemed accurate, true, or appropriate. We’ve all had plenty of time to digest and experience first hand, this kind of censorship. The placement of these terms should remain clearly and solidly, in the public domain.

This was followed by an interview that was divisive, some believing the man's story others saying he is a fraud looking to cash in on the growing popularity of UFO and extra-terrestrial based content.

During his testimony, so far presented in the most linear fashion, we observed that Jason Rice maintained what many would consider positive body language. He leans in towards the interviewer, he nods a lot and maintains rigid eye contact. All good indicators for honesty, well maybe we should not jump to a conclusion just yet?

According to most experts in this field, over a brief encounter, yes, this could be taken as a very positive indicator - however there is no academic research which supports this as a fact

It is generally agreed that maintaining eye contact for too long is a definite warning sign. Maintained over a lengthy, or several lengthy interviews of between 30 minutes and an hour (in the Beyond Belief interview) it is a really hefty red flag!

In fact Jason rarely searches his memory for answers when on these Gaia TV episodes, generally responding to questions immediately and without pause. This contrasts very heavily with the unscripted Fade to Black radio interview with Jimmy Church, including many questions submitted by the home audience. Here you can hear Jason stumbling over many of his answers, a lot of 'umming' and 'ahhing'  as you would expect when being probed with questions that have arisen in the minds of viewers over the period of his exposure. A few clatters and bangs (apparently a door fell on him) - his phoneline began repeating several overlaid voice messages as though he was in a call centre somewhere, and someone (cleaner or janitor maybe) was heard whistling in the background.

This giving the interview elements of spontaneity and making it appear less scripted and honest.

Maintaining eye contact for these unnaturally long periods is a major cause for concern, and it does give us one very big tell. According to Julius Fast, MD in his seminal book 'Body Language' there is a phenomenon which he describes as "The Liar's Blink" - where forced eye contact is confronted with the efforts of the subconscious mind to look away. A subject will blink much more often than is natural and often for longer than natural periods (a natural blink is around 1/40th of a second long), this Jason Rice does, and roughly every 4th blink is of an inordinately long duration.

He maintains this eye contact which is stage performance. In real situations we pointedly avoid staring at people in this manner and it can be read as dehumanising. It is reserved for animals at the zoo, in (hopefully) bygone times we may have stared this way at 'coloured' people in the American South, or at people in a freak show. It's actually really, really disconcerting if you find yourself in this position... or try it - it becomes uncomfortable very quickly. It is natural to make initial contact, recognising that the person is there with us. We then tend to become as expressive with our eyes as many people do with their hands when we talk, and again here, to the trained observer, this can be laiden with clues.

What do you think is the man telling truth and was he part of a secret military space program, or is he trying to pull the wool over everyone eyes?

Is this an attempt to become a celebratory UFO witness and make some money off of a work fiction by passing it off as fact?

Let me know what you think in the comment below.