In the field of cryptozoology there are a few creatures that stand spikes and fangs above the others.

Some Celebrity cryptid creatures receive all the love, Mothman , Bigfoot and Nessie to name a few.

One of these supernatural superstars is the Dover demon.

In what is planned as a series of videos I will give a recap on these popular creatures and my spin on them and the sightings witnessed and recorded.

Give my thoughts on any evidence found and conclude with a score on the cryptids probability of being real.

The DOVER DEMON was first seen on APRIL21, 1977 IN DOVER MASSACHUSETTS the United States.

The dover demon is described as a small humanoid like creature, Multiple witnesses have over the years, stepped forward to tell of the experiences that they have had when seeing the mysterious creature.

These witnesses describe a weird little animal with the same the characteristics in each sighting.

The dover demon is said to be a small a creature which has reddish or orange colour skin, a bulbous large head and small stick like legs. The creature can be bipedal but often is seen on all fours, it also displays the ability to easily switch between these two modes of travel.

It has eyes that have been reported to emit a soft glow, a glow which changes from orange to green at times.

A popular location for the cryptid to be seen, is rooting through trash and dumpsters. One can assume that it is searching for food in the scraps. This would indicate that it has diet suited to eating human scraps much like racoons or dogs and other omnivores.

Let's look at few of the times people have claimed to have seen and interacted with the strange little humanoid entity.

The original encounter happened on the 21st April 1977; this was when a teenager going by the name William Bartlett witnessed the little mysterious humanoid figure. It would not be the only time the demon was spotted.

The creature must also travel around or there could be more than one, as humanoids of small stature have been snapped in many locations.

This picture shows a small human like figure wandering the streets, taken by 15 years old John Baxter its shows the large bulging orange eyes of the strange beast. The image of the alleged Dover Demon In my eyes, is one of the best photos so far. The body conforms to the shape reported by other witnesses and the movement of the little guy is how others have said it walks. 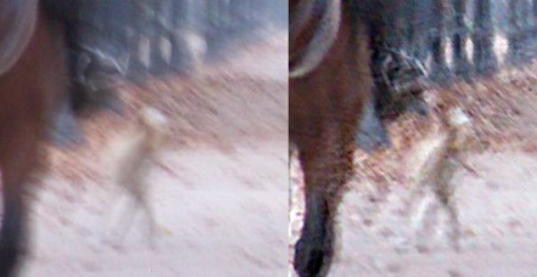 Ever allusive the cryptid was again accidently captured on film looking out from behind the bark of a tree. The large bulging orange eyes of the Demon make it easy to be identified as the Dover Demon. 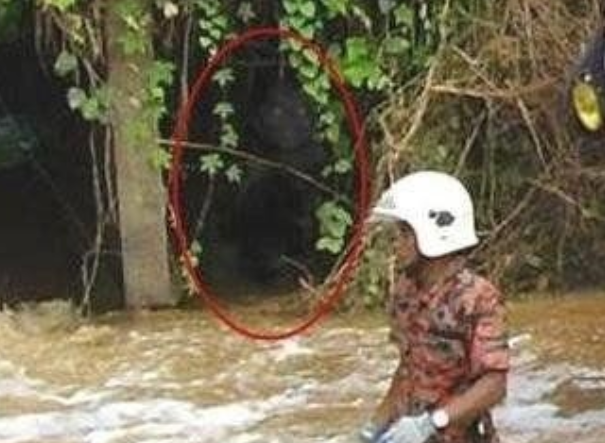 Another more convincing picture was released later and shows The Dover Demon in the background of the photograph where it can be seen peeping out from behind a rock as a man looks into the camera and captures a selfie. Man. Whatever the creature is it seems to be good at hiding.

This image shows the demon a little more clearly as the Demon that is snapped attempting to climb over some rocky terrain. The time and place of the sighting is not known. This one to me at least seems a little more hoaxish in the way it appears. It looks staged and the Demon does not look like a living creature. 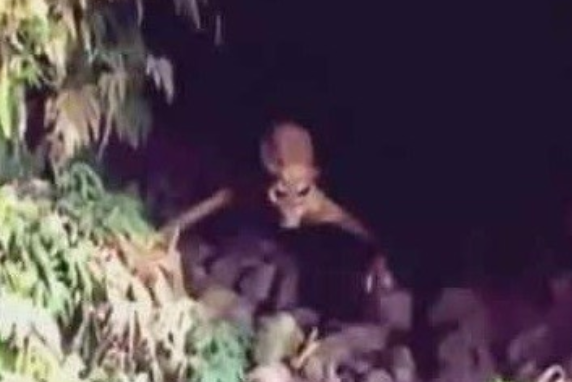 Another suspect picture of the Dover demon is one in which it is seen rushing out from a house. The pic was claimed to have been captured using a mobile camera by a local from Massachusetts. Looking at the picture the creature is clearly rushing the camera and whomever is taking the photo must have some composure as I for one would not be standing around taking pictures with a creature like this rushing me. 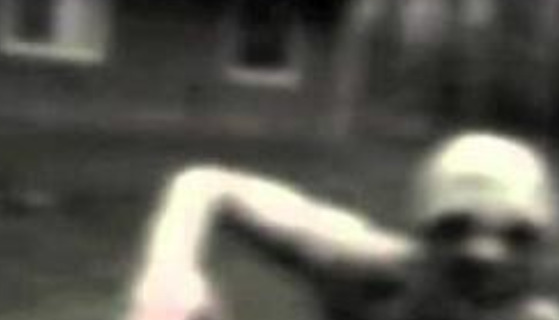 Here we can clearly see something odd in the dirt road if it is a Dover Demon or not is up for debate. The image shows the creature crawling in the woods of Massachusetts and again was snapped by a local. There are some similarities to the description of the Demon but to me this seems like it could be something else, which then raises the question “what is it?” 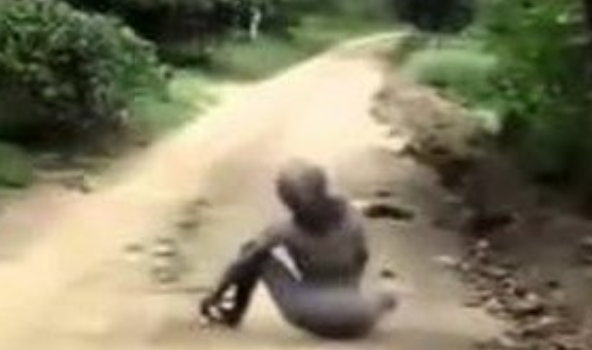 Finally, we have this picture which is seen all over the internet. A picture by a Louisiana resident in the morning of 30th November 2010 shows the shine of the eyes of the Dover Demon and its non-hairy body, the image sparked much online speculation when it was first published and many still this image to be manipulated in some way and not a genuine piece of evidence for the existence of the dover demon.. 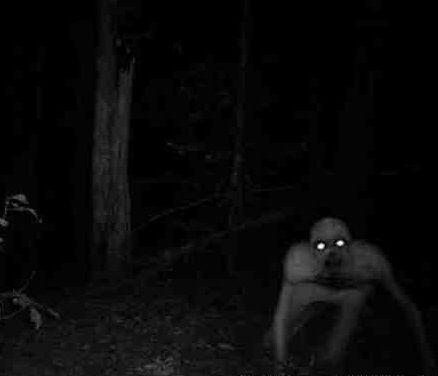 So, what ideas and theories are there for the animal captured in this series of images.

Nothing exactly like the Demon has been reported seen before or since. The Dover cryptid does not match with other cryptid the descriptions like that of the chupacabra, or grey aliens, even the bat-eared goblins said to have attacked a family in Hopkinsville, Ky., in 1955 are similar but not identical.

The first theory to address is the idea that the DD is of extra-terrestrial origin, with not much more than a fuzzy photo and eyewitness testimony the demon is lacking in some real piece of undeniable evidence as proof for its existence but many still cling to the idea of the little guy being a fact and not fiction.

If the demon is an alien, we must question why when first sighted in 77 and since has there been no associated reports of ufos?

The supporters of alien contact here on earth have also never claimed the creature as an extra-terrestrial, in other cases such as the aforementioned “Hopkinsville case” they were quick to chalk it up to alien contact, so why not with Dover the Demon?

This then leads into other theories as to what the creature could be and a few ideas have been put forward, the first of which suggest that the Demon is actually something far less sinister sounding “a fairy”.

Two  ideas support this as an explanation, the First, is that the Dover Demon does not have the appearance of any alien reported in any other UFO case. There are some passing resemblances to the popularized image of a "grey alien," but also some important difference the idea that the demon is a quadruped with shining eyes does make it very different from the black eyed bipedal “ Greys”, back to the Hopkinsville Goblins that weren't actually Goblins this has become a kind of nickname as ‘Goblin’ was used to describe their appearance by witnesses, but since they stood on two legs, had triangular heads, and wore clothing, I don’t see it being the same species of e.t.

If DD is a fairy we have to open our minds to the idea that there are other realms and that these realms are inhabited by other lifeforms whom can cross over on occasion into our world, it is these creatures that created mankind's myths and legends. Some say this is true and point to the fact that although the names vary often the same type of entities are seen all over the planet regardless of culture, religion or location.

Fairies also have more a magical aspect to them and could, at least in theory, and if folktales are to be believed, change shape, so they could have the glowing eyes, so on and look very much like the demon.

The glowing eyes also provide us with a challenge when trying to I.D the ,this as they are often reported as being different colours some swear they were orange, others say green yet more say they do not glow at all. Natural eye colour variation is seen across species so could this prove that there is more than one creature being seen.

Talking of other species some believe the Cryptid is a known animal all be it sickly, they

A few skeptics say the moose theory also hold water, as it could have been a baby moose standing on with its head raised feeding on trees, many say this idea is way off mark.

More ideas of the creature's origin stem from laboratories and involve "The Government's Cover-Up of the Dover Demon ".

Some have suggested that science may be the answer and that the Dover Demon is an escaped experiment, being from the 70s it was the early days of genetic research, but it is not out of the realms of possibility. If the Demon was created in a lab maybe it was bred or maybe, it's strange appearance is a result of testing and experimentation carried out on the creature

So, with all this information and a long history of sightings along with some good pictures I think the Dover Demon could be out there and the likelihood of the cryptid being a real flesh and blood creature is high.

My score for good old DD is a 90% probability for being real.

What would you score the dover demon at, do you know of any more compelling evidence if you do let me know in the comments below?