It's all around us, sometimes it's good, other times its bad, being British it a little of an obsession and usually the starting topic for small talk.

The climate is a “hot topic” pun intended, at the moment. There are those that say we are heading down the road of irreversible change that will see the world becoming an increasingly hotter place and eventually uninhabitable.

Others say that this a scam and that since the cause became popular after the being championed by Al Gore. It’s been an exaggerated threat

One thing is true, weather can get weird from raining frogs to strange lights in the sky.

Lets take a look at some of the strangest weather that has had people battening down the hatches. 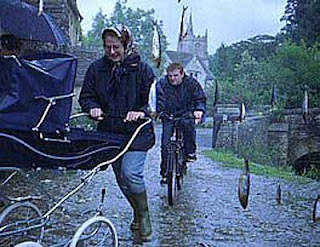 The media has been reporting many of the weird weather events that have been occurring around the planet mud slides flooding drought and more have been causing loss of life and suffering for many. Climate change seems imminent, but there are still some pretty rare natural meteorological occurrences to look out for.

Let's start out with one of the strangest and well-known natural weather phenomena odd objects falling from the sky.

Raining frogs fish and snakes has all been recorded.

Stories of strange rain date back to the first century A.D.  Pliny The Elder first tells the story of frogs falling from the sky another famous occurrence of odd rain happened in 1794, French troops reported the heavens opening and instead of water falling from the clouds it began to rain toads.

In Honduras it has for years been regularly raining fish the people of Lluvia de Peces must regularly deal with a deluge of seafood from the clouds.

So why and how does this happen?

One explanation for the phenomena comes in the form of tornadoes.

Tornadoes are the cause of some weird things. A tornado can destroy one house and leave the neighbouring house not only standing but untouched. They can be massive, miles width and last for hours or thin, light and last for just a couple of seconds.

The stranger side of tornadoes is that they can actually make it rain more than water.

If a tornado passes over a body of water such as a lake, river, or pond, the suction created by the vortex of wind can lift creatures from the water. What goes up must come down, and sometimes there are people in the way to tell the story after the skies clear out.

when the wind dies down the fish do fall.

In Hondurans the people say that the phenomenon is a miracle.

The story goes Spanish priest Father José Manuel (Jesus de) Subirana was saddened seeing how poor and hungry the villagers were, so he prayed for the miracle of food.

After praying for 3 days and 3 nights, the people were rewarded when fish fell from the sky.

Weird weather can also be linked to another strange event, the sightings of UFOs.

People have often reported clouds as alien craft on occasion clouds will be compressed and shaped by the elements to resemble the classic disc shape of a flying saucer.

Other have reported evidence left by alleged UFOs, this coming in the form of circles punched through the clouds. Witnesses say these perfect holes were made when an alien craft accelerated up and out of the earth's atmosphere.

A story out of California tells of how residents of the Stockton area sawn a huge hole in the sky.

The witnesses took to social media and discussed the many different theories as to what was cause of the hole, they suggested many different causes from alien spacecraft to an intergalactic wormhole.

Meteorologists say that the hole was caused by what is known as a fall-streak hole, or a hole punch cloud.

The weather experts explained how Cirrocumulus or altocumulus clouds containing super-cooled water that can't freeze and without a tiny particle to cling to cause these fall-streak holes.

Scientists hypotheses is that when aircraft fly through these clouds they trigger the process of ice forming and crystallizing. Air passing around an airplane's propellers or wings makes the air expand and cool rapidly and ice crystals form, then drop below a cloud long after a plane has passed through it.

From Ice we move onto fire and “firenado's”

Like a regular tornado the firenado is a column of spinning air, the difference being that this tornado is burning a vortex of flames.

These spinning winds of devastation consume all that lay in their path often causing wildfires and widespread damage.

One of the deadliest examples of a firenado happened in 1923 in Japan in the aftermath of a massive 7.9 earthquake. Survivors of the disaster gathered in an open space, but a massive firenado occurred and swept through the space, killing thousands.

And while on the subject of extreme heat when The Sun sets after a hot day it usually robs a thunderstorm of the instability they need to survive, however,for some thunderstorms this is far from the end.

If a layer of dry air builds within a dissipating thunderstorm, the rain falling out of the storm can evaporate all at once. The evaporating rain creates a bubble of cool, dense air that rushes toward the ground. This bubble of descending air compresses as it falls, causing it to dramatically warm up before crashing into the ground.

Alva, Oklahoma, was a recent location for a heat burst.

Hot Weather like this can cause a whole range of problems even grounding flights.

Even when there are clear skies and bright sunshine flights can be stopped from taking off.

An example of this comes from Arizona when temperatures rose as high as 120°F. Phoenix saw the mercury rise preventing some flights from safely landing or departing. The reason being something I have been ACCUSED of being full of,” hot air”.

When air gets hot it is less dense than cold air, extreme heat can prevent certain airplanes from generating the lift they need to safely take flight. If these airplanes try to take off in excessively high temperatures, the planes run the risk of barrelling off the end of the runway.

The biggest and arguably most spectacular natural light show on Earth occurs over the mouth of the Catatumbo River in Venezuela.

Warm and cold fronts meet creating the perfect condition for this lightning. Add nearby marshes emitting methane gas which in turn improve the electrical conductivity of the clouds and this results in an atmospheric phenomenon which truly amazes those that witness it.

Lightening is not the only strange lights that appears in the sky that can be traced to weather, strange green flashes can sometime be seen during a sunrise or sunset.

This bizarre phenomenon occurs often during sunrise or sunset hours. The green hue of these flashes comes when light is bent and refracted in the atmosphere. The atmosphere acts like a prism, separating light into its various colours.

When the sun is fully risen above the horizon, the different colors of the spectrum then overlap, causing the spectrum to be invisible to the naked eye. It's called a flash because that's exactly what it is – the green only flashes for a few seconds at a time

Getting back to lightning.

Another  rare weather phenomenon is named volcanic lightning, or more commonly known as a dirty thunderstorm. This weather takes the already spectacular event of a volcanic eruption and ramps it up with an electrical storm.

The process starts when particles separate, either after a collision or when a larger particle break in two. Some difference in the aerodynamics of these particles then causes the positively charged particles to separate from the negatively charged particles. Lightning occurs when this charge separation becomes too great for air to resist the flow of electricity. Volcanic eruptions also release large amounts of water, which can also help these thunderstorms along.

The Strangest Weather Ever Recorded

At this point we can sneak in the Aurora Borealis probably one of the most well-known and popularly seen strange weather occurrences.

This natural illumination happens above the magnetic poles in the north and is also known as the Northern Lights. (The south has the same phenomenon but is known as the Aurora Australis.

Just what causes these auroral displays?

The local native Indians believe that the Northern Lights are the location of the spirits of the deceased great hunters.

What weird weather have you experienced, which of the strange atmospheric events would you like to witness?

let me know in the comments below.