One of my favourite movies is the slightly cheesy but always fun to watch “Ghost ship”. A film in which a team of salvagers stumble upon an abandoned ship only to be tempted by many different pleasures and the allure of riches, this then leading them to lose their lives and possibly their souls.

This may seem to be just another work of Hollywood fiction but as with all good stories there is often a grain of truth to it.

We have all heard the tales of ghost ships like the Mary Celest and the flying Dutchman but there is another more modern vessel that truly was a ship of the dead. 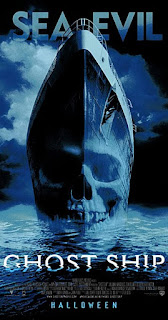 The shocking story of SS Ourang Medan begins in February 1948, this is the date that distress calls were received by several different ships near Indonesia, the source of the signal being the Dutch freighter SS Ourang Medan.

The broadcast the radios captured carried a chilling message it went,

“All officers including captain are dead lying in chartroom and bridge. Possibly whole crew dead.”

Answering these calls, the first rescue ship arriving to the struggling SS Ourang Medan came upon a   confusing scene, they attempted to hail the “Ghost ship” their calls failed to get a response, so a boarding party was then organised. Climbing onto the vessel they found a horrifying sight, a scene which would forever put the mystery of the SS Ourang Medan into the pages of books about all thing's mystery, paranormal and strange.

The entire crew of the ship were deceased and looked like their final moments were spent in absolute terror. Their eyes were frozen wide open, arms outstretched as if reaching for an invisible threat, and their faces were twisted and contorted showing the agony they had endured before passing away.

Strangely whatever had happened to the human crew members also happened to the animals aboard the doomed ship. The ship’s dog was discovered in the same horrific state and with a snarl on its lips as if it had died growling at some unknown threat.

As the search party approached the bodies of the dead crew laying in the boiler room of the boat, they noticed that the temperature was nearing 110°F.

Very confused at what they had found a decision needed to be made as to what they were going to do with the ship and its dead crew members, the decision to tow the SS Ourang Medan back to port and hand it other to the authorities was made.

The ships were strapped together, and the engines of the tug engaged but no sooner had they attempted to get underway, smoke began to bellow from the hull of the stricken vessel and without a second to spare all ropes between the ships were cut as the Ourang Medan exploded and sank.

When investigating the strange sinking many mysterious stories about the ship were uncovered. The ship had been reported to have been broadcasting its SOS for some time with reports coming from ships that had been sailing along the shores of Malaysia and Sumatra hearing the broadcasts, when they went to offer assistance they could not find the source of the messages.

Other ships and sailors had said they had seen the vessel only for it to vanish with a second glance.

After finally being boarded and the scary discovery of the many ‘frozen in fear’ corpses of the crew, the question of who had been sending distress calls crossed everyone's minds as the communications officer of the SS Ourang Medan was found sitting lifeless on his Duty chair, very incapable of sending any message, let alone the repeated broadcast heard by so many.

Obviously, the biggest question is what had killed everyone?

There were no signs of foul pay or sabotage no damage had been caused to the ship. Some may suggest that the smoke seen when the attempt to pull the ship was made could indicate that there was some hidden damage, but that offers no explanation to the terrified dead bodies all over the Onurag Medan?

Also, what made the vessel explode? 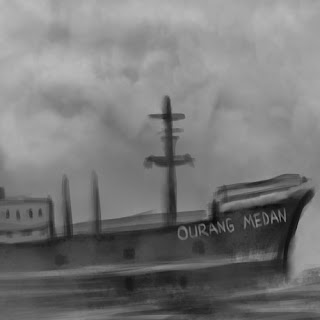 Another strange phenomenon reported by those that had boarded the “ghost ship” were the whispering voices heard as they searched for survivors.

Described by one of the members of the rescue party, as scary inhuman laughter that struck fear into his heart. Those watching the search from outside of the vessels cabins and rooms reported mystery strange lights, moving around the boat.

A mystery still lingers for those who attempt to solve the maritime tale as finding the origin and official identity of the “Ghost ship” is impossible, they cannot find any records which prove that this ship had even existed.

There have been claims made the mystery ship was from Sumatra, but others think it to be of Dutch origin. Those that speculate on the mystery suggest that maybe the vessel was on some secret mission. They suggest that this could offer an answer to both the hidden identify and the mysterious deaths.

They think that the ship may have been carrying deadly secret substances maybe chemical or biological weapons and that these weapons were accidently or possible through sabotage released killing the crew.

However, the ship which responded to the distress call does not make mention of anything that could indicate that this theory is fact.

There has been another suggestion as to what happened the ship and its crew and it links to another maritime mystery,  The Philadelphia Experiment.

The Philadelphia Experiment is an event that many have heard of but here is a quick recap if you haven't.

Some say that this is a military urban legend while others claim it to be 100% fact.

According to the legend, on Oct. 28, 1943, the USS Eldridge, a Cannon-class destroyer escort, was participating in a top-secret experiment. An experiment designed to win command of the oceans against the Axis powers.

It is said that the government was working on creating a technology which could make a naval ship completely invisible to radar, this experiment occurring at the Philadelphia Naval Shipyard, this is where the name for the conspiracy is derived.

Those that Witnessed the testing of this new technology claimed to have seen an eerie green-blue glow surrounded the hull of the ship this as her generators spun up and then, suddenly, the Eldridge vanished.

The ship was then seen in Norfolk Naval Shipyard in Virginia before disappearing again and reappearing back in Philadelphia.

The legend states that classified military documents reported that the Eldridge crew were affected by the events in many disturbing ways.

Some went insane. Others developed mysterious illness. But others still were said to have been fused together with the ship; still alive, but with limbs sealed to the metal.

They all had absolute looks of terror across their faces something that sounds like the crew of the SS Ourang Medan.

The Tale of the SS Ourang Medan has grown in legend over the 75+ years it has been retold, over the seven decades new “facts” have been added to the story.

Other Authors like Morris K. Jessup have quoted the article and then put their own speculations onto the story. The 1955 book “The Case for the UFO” a book which also discusses theories on The Philadelphia Experiment, suggest that the crew might have been the victims of a UFO attack. It also talks about mysterious paranormal forces which may have interacted with the ship's crew prior to their deaths.

To support their claims the authors points to circumstantial evidence that includes the apparent absence of a natural cause of death, the reportedly terrified expressions on the faces of the deceased, and rumours that some of the dead were “pointing” towards an unknown enemy.

Was this an enemy from stars?

In yet another strange twist to the tale there are letters in the CIA Archives that make mention of the ship and the incident, In December 1959, C.H. Marck Jr. of Scottsdale, Arizona sent a letter to the assistant to the Director of the U.S.’s Central Intelligence Agency (C.I.A.) Allen Dulles. The letter was classified as “top secret” by the C.I.A. and would not be released to the public until May 5, 2003. While the letter and its sender were known, the person to whom Marck wrote the letter remains redacted by the C.I.A. to this day.

Could this letter and the secret CIA files be the smoking gun that is needed to finally answer this mystery, would it show that the vessel was carrying secret weapons, maybe it would prove that not only are aliens real they are attacking ships or could provide tangible proof of some kind of supernatural force?

WHAT DO THINK HAPPENED TO THIS SHIP AND ITS CREW, WAS THIS SOME KIND OF EXPERIMENT GONE WRONG. UFOS ATTACKING THE VESSEL OR SOMETHING MORE PARANORMAL?

LET ME KNOW WHAT YOU THINK IN THE COMMENTS BELOW.