It's time for another Cryptid profile. This time we have an animal that strikes fear into those that hear its name, a water dwelling creature that will drag you to a watery grave if you unfortunate enough to cross its path.

Africa has many monsters some real but with others it's not so clear, could this animal from myth legend have a grounding in truth, is there an unknown to science aquatic predator lurking in the river's lake and ponds of the dark continent?

The name of this fearsome is the Mamba Mutu

Let's begin with a general description of the beast which many throughout Africa fear and that keeps people on edge whenever they are near water.

Bear in mind that this is a country jam packed with animals that will happily turn a person into a mid-afternoon snack.

The mamba mutu is reported to be a vampiric creature that mainly inhabits Lake Tanganyika the Congo Africa, although there are many similar creatures reported across the country, but they can be known by a variety of different names.

The creature is said to be much like the mermaids of western myth and legend but with a thirst for human blood and will feed upon those that stray too close to water's edge or fail to show the appropriate respect when traveling by water.

It is customary to leave an offering at the lake’s shore in the hopes that you can appease the Mamba mutu and have a safe journey.

Mamba Mutu are very dangerous the people of the Democratic Republic of the Congo describe an animal said to have arms similar to those of the lobster, a fish-like tail and its head is a very human like in appearance, that is if you ignore the mouth full of razor sharp teeth, teeth the Mamba Mutu use to eviscerate its victims and consume their blood. It is said to especially fond of the blood of children.

The cryptids name Mamba Mutu originates from the Swahili (Bantu) mamba mtu  meaning "crocodile man”. This name doesn't really convey the fear people have or the cryptid. Crocodiles are often caught and eaten , no one in their right mind would hunt the Mamba Mutu.

So just when has this creature been seen?

One story which is linked to the beast and was officially documented, and part of the public record is that of a delayed reservoir project.

A project had been established to create build and repair reservoirs in Zimbabwe, the work came to grinding halt when workers began to report strange incidents as they tried to work on the project. The country’s Water resource manager was forced to make a public statement that work had stopped because Mermaids had been harassing his workers.

Samuel Sipepa Nkomo told a Zimbabwean parliamentary committee that terrified workers were refusing to return to their worksites, near the towns of Gokwe and Mutare. They feared they would become a meal for the river crytpid.

Minister Nkomo said the only way he could think to solve the problem was to brew traditional beer and carry out the ceremony and offering rites that might appease the spirits, mermaids or Mamba Mutu.

Minister Nkomo spoke to Zimbabwe's state-approved Herald newspaper saying, “All the officers I have sent have vowed not to go back there”.

The newspaper article was a concern for some while others thought this to be a ploy to gain extra time to complete the projects without incurring penalties for over running on the allotted time given when the project was green lit.

Opinion about the existence of mermaids varies throughout Zimbabwe - some people are sceptical, but some firmly believe that mermaids do exist in Zimbabwe and across the continent.

They fear the tales which say these mermaids will carry humans away to their underwater home, and if there is a public outcry their relatives might never see them again.

Another tale suggests that these victims can return themselves return as spirit mediums if their disappearance is not mourned.

The senior politician said that mermaids were also present in other reservoirs.

'We even hired whites thinking that our boys did not want to work but they also returned saying they would not return to work there again,' he added.

The two, long overdue reservoirs are considered essential if Zimbabwe is to be provided with adequate water for its population and to boost its agricultural production.

The belief in mermaids and other mythical creatures is widespread in the country, where many people combine a Christian faith with traditional beliefs.

Local Government, Rural and Urban Development Minister Ignatius Chombo said the government wants to give the population the water it needs but cannot do so until the rituals are performed, and necessary repairs can be carried out.

This creature or creatures have a real impact on the local peoples, and could this be because what they are reporting is a real animal, and if it is a real animal what could it be?

Could a known animal be the answer?

Cryptozoologists have long thought that witnesses to the Mamba Mutu and other mermaid like  cryptids could be seeing freshwater manatees or even some kind of otter-beast like the doyarchu.

The creature is thought to specifically inhabit Lake Tanganyika and the Lukuga River in the Congo region and this may offer us a clue to a few possible animals that could have created the legend.

Lake Tanganyika is  home to a variety of fearsome and ferocious fish such as the fanged toothed tiger fish . A large species of that easily reaches 5 feet in length.

Believers in the mamba mutu rationalize the stories by claiming that perhaps the legends are based on manatees or even some type of giant otter or a type of water dwelling feline.

Aquatic feline beasts with large canine teeth and yellow un-patterned skin have been reported across all Africa they are often referred to as water tigers. 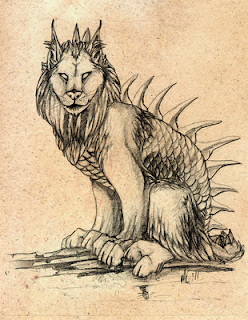 Sometime confused with otters like Iemisch and even ground sloths it could be a possibility that they are a surviving machairodontid. This animal then evolving and adapting to an amphibious lifestyle.

This could help explain other regional cryptids like water lions water panthers and water leopards. Although the former sparks my mind into thinking of sea lions, could these animals be some kind of freshwater seal?

Had you heard of this cryptid, are there similar creatures where you are from?