Did civilization come from another world?

There are many people that support the idea that humanity as a species is a lot older than science currently claims.
Many theories with links to many ancient and mythical sites have been discussed these have crept into science fiction and one popular television show that looked at the idea of humanity coming from the stars was Battler Star Galactica.
In a case art reflecting life and life reflecting art this idea may be closer to the truth then many assume.
Could many of the ancient sites around the world point to a mysterious celestial body that dates civilization to millions of years instead of hundreds of thousands?
Did this civilization come from another world? 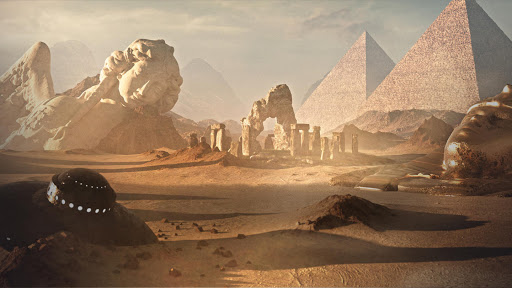 In one of the best articles I have read in the longest time on the subject of ancient human history the website “UNEXPLAINED MYSTERIES” A go-to for some amazing stories on all things strange posted a story titled:
Is Civilization on Earth, 103 Million Years Old and were they, Aliens?
The post starts out by suggesting that there were once civilizations established and thriving on Mars and the moon and that these people, aliens or our ancestors then moved to earth.
This idea is said to be widely known in academia but there is an agenda to hide this history, over the centuries there has been much in the way of evidence discovered pointing to this idea, but the established academic community does not what to accept the idea and dogmatically adheres to their timeline for human history and the development of early civilizations.
The article then suggests that it may be a good idea for us to restart the study of human history this time taking into account the idea of our species being intergalactic immigrants to the planet.
The post then outlines the idea that we can look to the impact craters said to be created by meteors impacting here on the planet instead as evidence of alien craft landing.

The article says:
”looking at the location and distribution of craters. You can find maps displaying impact locations on the internet. If you look closely and consider what you see you will notice that you can draw a line in between these impact craters indicating an average path for their distribution which is the slope of a line or linear equation of their distribution. Keep in mind that although the Earth is round the map is flat and as such you can draw a line through the impact just like you can coordinates on any map or graph. This is called curve fitting.”
This curve fitting can be extended out and around the world and matches with what is claimed to be a celestial object which orbited the earth millions of years ago.
This proposed object has long vanished both physically and from memory.
We are left today with locations in a variety of geographic locations that were directly under the line or orbit of this extinct celestial body.
This missing, let’s call it “ moon “, is said to be the beginning of tectonic movement on the planet and controlled the speed and direction of the various continents, this then linking to many ancient sites which were constructed in a path to observe this object.
This raises a number of questions.
What happens when we date archaeological sites?
The article says we find dates that are extremely old, some claim these dates place the building of these places to many millions of years in the past. The designing and constructing of these highly important cultural locations being undertaken by the ancient inhabitants of the Earth.
Some of the dates that are claimed for these buildings are millions of years, starting with Egypt and its pyramids we get dates that range from 16,000 years in Southern Egypt to 46 million years along the coast. Giza said to date back to a long-forgotten period of human history some 28 million years of ago.
Moving away from Egypt and the many mysteries that land holds to North America.
The Americas being home to many significant locations that have dates said to be much older.
“The Effigy Indian Mounds of Iowa and Wisconsin fall directly under this orbital path at a date of 16 million years.”
This is when the article moves back to comparing modern archaeological ideas, today's established theory is that these locations are only around 5000 years old. This idea is down to the context of how history is measured.
To once again quote the article it says:
They take some artifact or bone and date that and then apply the date to the whole structure. They don’t date and can’t date stone and in this case earth. The mounds are made of earth that is identical to the earth around the individual mounds and there is no way to determine the exact age of the building of the mounds from the background earth.
The claim is that these mounds were constructed around 16 million years ago as to be in the path of the orbit of the mysterious celestial body.
This is said to also be the case in South America.
Mexico and the Yucatan Peninsula are particularly important .The post says that if you cycle back through the maps of America and hit a period of history some 66 million years in the past the Yucatan falls directly into the orbit.
At 66 million years ago, it crossed the Chicxulub crater formed by the meteor impact which obliterated the dinosaurs.
It is then said that this could indicate that the huge object that struck the planet originated with the celestial orbital path this suggesting that what existed was a ring of debris circling the Earth in antiquity.

This orbital path travels also moved over Chichen Itza and Tulum, two prominent ancient ruins in Mexico. There is no particular reason to locate these two sites where they are unless they were deliberately built under this debris ring indicating the existence of intelligent life in the Yucatan at the time of the dinosaurs.
It is thought that the building of these ancient monuments serves no other purpose than to highlight this ring around the planet, this also shows that mankind was living side by side with dinosaurs. This idea has been supported by the many artifacts that show “man and dino” not only living side by side but interacting.
The article also point to another mystery Monte Alban. Monte Alban was or is a lost ruin some 6,400 feet high up in the mountains on a level plateau. If the tectonic movements talked about earlier apply the site can be dated to 85 million years.
This could mean that the original city was built on a level plain that became elevated due to the plate movements in Mexico at that time.

This then goes onto to look at the links to the La Venta, the lost ruin of the Olmecs and to a date of over 103 million years. The Olmecs were referred to as the “rubber people”.
This name could point to them being something other than human, were they ancient aliens?
Are they the original inter-planetary immigrants from the moon and Mars?
Did they come here from another world?
The Olmecs it is said could be the definite evidence of intelligent life here on the Earth during the reign of the dinosaurs.
The article doesn’t go any deeper into this idea, but I think it may be worth looking into. Let me know if that’s something you would like to see.
The post returns to the mystery ring that encircled the planet, it links this to the formation of the moon.
The current idea supported by the mainstream is that the moon was formed when the Earth was struck by a Mars size object that ejected massive debris into space which was shaped and collected together by gravity and formed the moon.
This idea also becomes the mechanism for the origin of Earth’s debris ring as not all of the ejected debris formed the Moon, some debris was left and this is what ringed the earth.
In the final link to these ancient sites and the idea that civilization existed on Earth millions of year prior to what is thought. These ancient beings seeing this ring and its existence being passed down through generations in stories of a stairway to heaven, a pathway to the gods, a ring, a dragon, a spider, or a snake.
The article concludes:
“In fact, there are snake statues next to the massive pyramid of Chichen Itza indicating that this debris ring passed over this pyramid in the ancient past. It seems to be the reason this pyramid was built.

Again, this analysis seems artificial and abstract but is never-the-less is correct. There really are impact craters on the Earth. We can really apply mathematical analysis, like curve fitting, to their distribution and find the projection of an orbital path of a celestial object around the Earth. Given the numerous impact craters on our planet and the stories and myths of the ancients, it most likely was a massive debris ring.
Since the Earth has geologic plates that move and their speed and direction of movement is known, one can use this technique to date various archaeological sites.

The result is that we now can date civilization back 103 million years and there is a possibility that it may be very much older.
As to whether they were aliens from space, we don’t know at this time.”
I suggest, if you do not know the website, that you take a look.
Links are in the video description.
What do you believe, is humanity millions of years older than established science says?
Did our species arrive from the stars and have we forgotten our history?
Do ancient sites and myth and legend point to time when our ancestors first settled a wild planet?
Let me know what you think in the comments below.

Email ThisBlogThis!Share to TwitterShare to FacebookShare to Pinterest
Labels: Ancient aliens., Ancient Artefacts of a Lost Civilization., Ancient mysterious locations.The rock wall Texas and the works of old men, Did civilization come from another world?