Did Modern man wipe out all other Hominids

There have been many human type cryptid creatures from elves and fairies to orcs and trolls.

In story and legends these entities are often in conflict with man and man is often the victor.

Could these myths and legends have a grounding in reality did modern homosapiens eradicate other types of human that were in competition with them?

Could these other types of human insp

ired legends and did we kill all the other species of human?

there were at least nine different species of human that have walked the earth that number has been whittled down to just one.

Senior lecturer of paleontology and evolutionary biology at the University of Bath, nick longrich, recently explored the uncomfortable idea that we as a species have always been a cause of death and extinction this as being the case in the past as much as it is today.

If we go back 300,000 years ago, we find nine human species walking the planet.

All that is left is said to be one “us” that is if you do not believe in the many cryptid humanoids said to roam the wilds of every continent.

The denisovans made their home in Asia, while the more primitive Homo erectus lived in Indonesia, and homo rhodesiensis in ruled over central Africa.

There have been several short, small-brained species survived alongside them: homo naledi in South Africa, homo luzonensis in the Philippines, homo floresiensis (“hobbits”) in Indonesia, and the mysterious red deer cave people in china.

These small species of human lived side by side with modern humans and it is likely that there were interactions between the humanoids.

It is also possible that as modern humans became more dominant that the less prominent smaller species of human were driven to extinction.

There is the idea that some have survived and that they are seen on occasion and that the small humans are the source of cryptids legends such as the orang pen dek and others.

Given how quickly of late we have been discovering new species, it could be that these human relatives are waiting to be found.

Could missing species offer an explanation for the many mystery humanoid creatures found in myth and legends across the planet both large and small?

Or could these cousin species of human have already been rare and were driven to extinction by modern humans?

The ancestors we know about were long gone by 10,000 years ago, they were all gone.

The professor says that the disappearance of these human species is very much a mass extinction, however unlike other extinction level events there’s is no obvious environmental catastrophe – volcanic eruptions, climate change, and asteroid impact – behind the vanishing of these species.

The cause that has been put forward for the die off these groups of humanoids being the arrival of modern humans in the areas that these hominids thrived.

The extinctions’ timing suggests they were caused by the spread of the new species, homo sapien sapien “us” evolving in Africa some 260,000-350,000 years ago.

We moved out of Africa and triggered the sixth mass extinction to hit the planet.

This extinction event being a slow roll out of death which over 40,000-years has seen many species disappear, from ice age mammals to today's destruction of rainforests many animals have met their doom at man's hands.

Were ancient humans were also swept up in this list casualties?

Our history is dotted with extinction this making us an extremely dangerous species. Some may say the deadliest on the planet.

Early man hunted the wooly mammoths and many other animals to extinction. As civilization has grown we have destroyed much of the natural habitat, burning forests for farming, clearing land to make way for villages towns and the cities.

This has had the unintentional consequence of altering the planet’s climate. 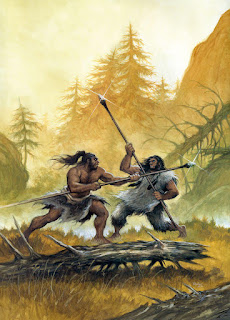 These early cousins of ours would have been the first to witness our destructive ways they would have seen us at war with each other possibly even had to fight against us as we displaced them.

It’s a characteristic of our kind that we move from one place to another and often do so aggressively crushing a weaker group to gain more resources for our group, something that today is still happening as we fight over oil and precious metals.

This tendency to engage in genocide is arguably an intrinsic, instinctive part of human nature. This viciousness would have been part of early Homo sapien culture there is no evidence to support the idea that they were less territorial, less violent, or less intolerant.

If they did cross paths with another hominid I think they would have first attacked and the questioned what it was after the fact. This then leading into the idea that some mythical human like creatures would have grown out of the stories of these interactions, after all in most the modern human is the hero that vanquishes the beast!

Looking back many see history through rose tinted lenses and imagine early man as mainly hunter-gatherers a peaceful bunch of noble savages, they say it’s the modern world that has changed man into a violent brutish species, a flawed idea as there is much historical evidence, and supporting archaeology to show that war existed between in primitive cultures and that it was intense, pervasive and just as lethal.

For centuries we have been finding Neolithic weapons everything from clubs, spears, axes and bows, we find evidence for the use of these weapons in raids and ambushes. life expectancy was a lot lower back then and most think this was down to poor health and lack of medical knowledge, this is wrong. Most met their end at the tip of a sword spear or arrow.

Ancient Man wiped out all other species 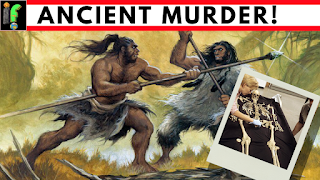 The discovery of Old bones and artefacts highlights this violence.

Many of the ancient bodies we have been luck to find have signs of this violence The 9,000-year-old Kennewick Man, from North America, has a spear point embedded in his pelvis. The 10,000-year-old Nataruk site in Kenya documents the brutal massacre of at least 27 men, women, and children and theres  Ötzi, the Iceman who it is believed was murdered; an arrowhead being found in his left shoulder, which would have caused a fatal wound and many, many more.

But before this turns into a homo sapien bashing we must take in account that It’s highly likely that the other human species were just as violent. Today our closest relatives chimps participate in cooperative violence this suggests that war possible predates the evolution of modern humans.

This we could see as the start of an arms race from stick and rocks to eventually bombs and guns, the destruction of war has somewhat ironically lead to some of the greatest technological development in history.

When the Neanderthal clashed with modern humans they were at a technological disadvantage sophisticated weapons gave Homo sapiens a military advantage and we have the bones to prove it. The ancient arsenal of early Homo sapiens probably included projectile weapons like javelins and spear-throwers, throwing sticks and clubs.

We needed this advantage as if we would have tried to battle Neanderthals on an equal footing they would have destroyed us, their size and strength being greater than that of modern humans.

This development of weapons and tools would lead to more efficiently gifting us the means to harvest crops hunt a wider range of animals and feed larger and larger tribes, this then giving our species a strategic advantage in numbers.

For competing groups of hominid if we couldn’t kill them we could breed them into extinction.

The ultimate weapon coming out of this arms race being our ability to cooperate, plan, strategize, manipulate and deceive all skills refined and practiced bringing us to today when we have no outside enemy and have turned in against ourselves.

The fossil record show that it only took modern humans a few thousand years to wipe out the Neanderthals our last living hominid cousin, maybe it will only take us a few hundred to do the same again but this time we could be the race that vanishes.

As nihilistic as this all sounds there is some hope, in recovered DNA it has been discovered that we didn’t always kill that which was different sometimes we met, and we mated.

DNA tells of encounters with archaic humans. East Asian, Polynesian and Australian groups have DNA from Denisovans. DNA from another species, possibly Homo erectus, occurs in many Asian people. African genomes show traces of DNA from yet another archaic species. The fact that we interbred with these other species means they didn’t really disappear after encountering us.

We merged and we still carry a small part of them with us today.

As cliché as it may sound it seems the way to defeat the violence with in is love.

Nick Longrich, finishes the paper with a great paragraph I quote;

Today we look up at the stars and wonder if we’re alone in the universe. In fantasy and science fiction, we wonder what it might be like to meet other intelligent species, like us, but not us. It’s profoundly sad to think that we once did, and now, because of it, they’re gone.

What do you think, could these ancient species of hominid be the truth behind the stories of mythical human like creatures or are they still alive today, are they hiding from us and today instead of being thought of as trolls orcs or elves they are thought to be cryptids.

Creatures like the Abura Akago, Agogwe, Genoskwa, Orang pen Dek and the big Daddy himself Sasquatch?