In the pentagon announcement that recently admitted the UFOs captured on film, then classified, and finally leaked online, were indeed of unknown origin.

The claims of the Department of Defense that the capabilities of these objects were beyond current technology.

What if this was a pentagon lie.

What if for the longest time they have been back engineering or were inspired to create anti-gravity technology from the study of other source technologies?

Is there any proof that these projects are based off of recovered extraterrestrial tech which was then used to build man made vehicles that can defy gravity?

A recent discovery could be proof of both 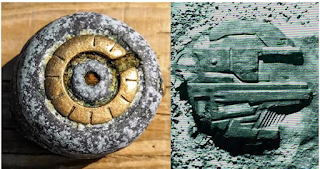 The story starts with one that is familiar to most that follow the news and stories linked to Unidentified flying objects.

For a quick recap, back in 2011 the sonar of Peter Lindberg, Dennis Åberg, and their Swedish “Ocean X” diving team captured a mysterious object laying on the ocean floor. The shape they imaged reminding them of a spaceship, chiefly that Star Wars favorite the ‘millennium Falcon’. The men investigated, sending divers down to inspect the object, these divers said that there was an object on the surface of the strange structure.

This they thought could have been what was causing the problems the team were experiencing their electronic devices, even satellite phones, ceased working when in the area just above the sunken object.

The team did recover a sample from the “submerged structure” and after it was tested in laboratory, it was found that the sample contained limonite and goethite. Both of These materials being comprised of metal that is not food naturally.

The men also came upon an O-part- ‘O-parts being out of place artifacts’- something I have featured here before, strange objects such as the Dropa stone discs, the Roswell rock and the Klerksdorp Spheres. 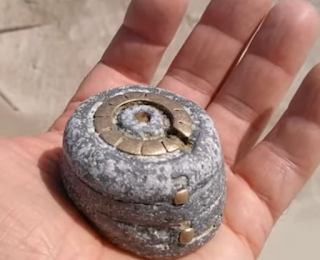 As you can see the object looks stone like with gold metallic insets, these insets being composed of some extremely rare metals for our planet with a high purity of around 99.99%.

It’s small enough to easily fit in the palm of the hand but it is claimed to be very powerful, generating a strong energy field, how it does this still not understood by scientists.

Adding to the mystery is the age of the object, tests dated it to 140,000 years ago. This placing the artifact in the Eamian interglacial period, a time when humanity battled for survival.

A period of history long before our species had even discovered metal tools.

I don’t want to get side tracked by the origins of such an amazing artifact, let’s just say it came from a more advanced civilization. That civilization may be from a long lost period of human history or from a race that came from the stars, the fact is it is here and display unique properties and capabilities.

The ability to manipulate gravitational forces has long been associated with the appearance of UFOs the way in which they do not obey the laws of aerodynamics has been theorized to be down to the use of some antigravity device, maybe a device like what was found on the Baltic Sea floor?

Whatever powers these spacecraft allows them to hover and move with great velocity in any direction, seemingly without a source of propulsion.

These abilities are something many want to replicate, the Association of Science ­Technology Center’s (ASTC) annual conference highlights the attempts of scientists across the globe to understand and decipher how this concept of Anti-gravity works.

One idea many are working on is magnetic repulsion. Israeli physicists have demonstrated how a superconducting disc could be levitated through a sophisticated series of magnets.

This gives on possible answer to how anti-gravity can be achieved but it is not as simple or as neat as the artifact found by the divers.

With the game changing capabilities this technology would offer huge investment into its research has come from the military.

The US Navy was granted a patent for an advanced aircraft which resembles a flying saucer UFO. Military inventors filed plans for a highly unusual flying machine which uses an ‘inertial mass reduction device’ to travel at ‘extreme speeds’. This man made UFO-LIKE aircraft uses complex technology to reduce its mass and thereby lessen inertia (an object’s resistance to motion) so it fly at incredibly high velocities.

The patent is highly complex and describes methods of reducing the mass of an aircraft using various techniques including the generation of gravity waves, which- it is claimed- were first detected in 2016 after being produced when two black holes collided.

The idea of finding this out through such an event sounds a little suspicious to me, could this be the cover story for this patent which was actually the result of back engineered alien or ancient technology that is in government hands?

The patent describes a process that sounds so far beyond us, the craft described in the patent features a cavity wall filled with gas, which is then made to vibrate using powerful electromagnetic waves. This then creates a vacuum around the craft, allowing it to propel itself at high speeds. The UFO-style ship can be used in water, air or even space. ‘It is possible to envision a hybrid aerospace/undersea craft (HAUC), which due to the physical mechanisms enabled with the inertial mass reduction device, can function as a submersible craft capable of extreme underwater speeds… and enhanced stealth capabilities,’ the patent continues. ‘This hybrid craft would move with great ease through the air/space/water mediums, by being enclosed in a vacuum plasma bubble/sheath.’

The resemblance to the TR3-B is uncanny and what is described in the patent is very similar to many reported USO and UFO sightings.

Back in 2004 the USS Nimitz captured the UFO video that was just released by the pentagon along with their claims of not knowing what the undented flying object was or where it had come from.

We have to ask ourselves if it is possible that there is a connection between the USS Nimitz incident and the craft described in the patent. With Nimitz event happening in 2004 over a decade before the US patent was filed ‘It’s conceivable that the patented aircraft was inspired by the incident and is part of an attempt to work out the technology behind the objects that were chased by the Navy F-18s.

It’s at this point our old friends at AATIP once again come into the picture.

The group commissioned a 38 paper report exploring exotic technologies, these were then used by Defense Intelligence Agency during its congressional briefings.

The papers received much media attention due to the claims that technology such as anti-gravity, invisibility cloaking, warp drive and wormholes, and other exotic propulsion systems were in development and that this tech would enable us to build a faster aircraft, drones or missiles.

Declassified documents showed details of the research papers produced by the AATIP investigators three programs stood out, the patent for a “craft using an inertial mass reduction device”, “high-frequency gravitational wave generator” the third a cloaking type technology that would render these vehicles invisible to the naked eye.

These advancements really blur the lines science and science fiction.

The fact of the matter is that we have an ancient unexplained objects that display characteristics which today we are recreating.

Bob Lazar and many others have made claim that much of the huge leap seen in technology from the 1940s comes from the discovery of alien craft, bob says he was even told that these craft were found on archeological expeditions.

What do you think, is this strange ancient artifact the smoking gun that reveals today’s military have and are using back engineered technology.

Where did this technology originate from?