Another week of quarantine passes us by, these recent events have made it feel like we are seeing the end times adding to the ominous feeling which many are the strange global occurrences of Skies turning blood red above many places on the planet. 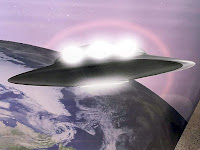 A lot of countries have been reporting other worldly, colors in the sky.
So maybe the old saying of
“Red sky at night, shepherds delight, red sky in the morning, shepherds warning”
Should it  be heeded?
Let’s head over to Stockholm Sweden and a strange event which saw the sky in central Stockholm glowing red Just before the stroke of midnight. This unexplained phenomena appeared suddenly and then disappeared just as quickly.
Stockholm police gave an announcement trying to explain the strange event, they claimed that there were a large number of Bengali fires what were lit at the same time on the Västerbron.
Bengals are flare candles mainly used to achieve indirect pyrotechnic lighting of surfaces or buildings, Västerbron is an arch bridge in central Stockholm, Sweden. Stockholm Police said that using these flares is a violation of the Ordinance Act but this didn’t stop a claimed 30 individuals at Västerbron lighting the bridge using Bengals.
They were said to be doing this as an anniversary tribute to the deceased footballer Ivan Turina who died on May 2, 2013.

Many doubt this to be the real cause. The event was seen over much of the Stockholm and one witness described what she had seen.saying:
The sky was deep red, It was so strange, five minutes to twelve the sky became clear and then it disappeared quickly, Maybe it was only for 30 seconds.
She went on to tell that she didn't smell anything like you would if there was a large fire and that she hadn’t  heard any bangs or explosions. She said that she watched the strange red sky through open windows and did not notice anything other than the odd colored night sky. 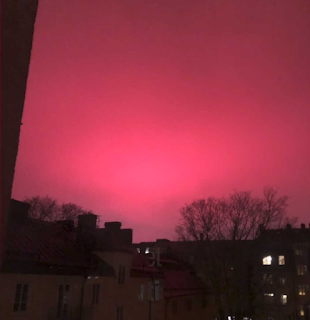 The fire service in Stockholm responded to alarms raised by concerned people who thought this was a sign of large blaze. Responding to the alarms they found nothing, said Tony Frank in a press release from the commanding officer at RC Mitt.
This meaning that the strange glow had to come from somewhere else and the police explanation of flares would not seem to be plausible.
Strange colored skies have also been spotted in many other countries, a mysterious blue light appeared in the sky over Madrid, Spain a couple of days ago.
Heated debate erupted on social media over the cause of mysterious blue lights which were spotted in different places across the world, including Australia, Spain, and the United States.
Some have made claims that these strange colored skies are a naturally occurring phenomena known as the piezoelectric effect.
Piezoelectricity is the electric charge that accumulates in certain solid materials in response to applied mechanical stress. The electricity resulting from pressure and latent heat.
One commenter wrote: "If large slabs of Quartz crystal in the earth crust compress at a specific angle it causes a large electric field to generate a local equivalent of an aurora in the sky above".
Others claimed that the governments or Elon Musk's company SpaceX were testing some hidden new technology. Others claimed that these lights were coming from extraterrestrial life and UFOs and are a sign of impending catastrophe.
One comment that summed up this idea went as follows:
"The world or our reality is shifting. I can just feel it. I think there's some sort of hidden battle going on and it's being noticed by many now.”
Strange stunning lights in the sky seem to be increasing everywhere. Is this a manmade or natural phenomena?
Chem-trails have a long history and are said to be part of a global program to change our atmosphere, could this mysterious agenda also be linked to UFOs?
If it is we may have to ask if these UFO craft are from this planet or another world. One recent event could help us to decide.
Ufologists were left perplexed by recent photos showing what appears to be an unknown vehicle spraying a greenish mist over a Californian neighborhood.
The sighting is being investigated by MUFON, they are looking at Witness testimony which told the UFO appeared over Huntington Beach, California. The images captured providing clear evidence of a craft thanks to clear blue summer sky.
A Witness to the event believed that they were seeing a plane in trouble. He told MUFON:
“I looked up to see what I first thought was a passenger plane on fire.”
This idea quickly disappeared when the witness realized that the flying object had a dome-like shape with a band of orange lights going around its circumference, a typical UFO shape that is instantly recognizable.
It looked as if this mysterious craft was in some kind of trouble as green vapor was being emitted from the craft as it moved through the air, there was however no fire or any other sign that this unidentified flying object was in difficulty. Instead it looked as if this green smoke was being sprayed on purpose. 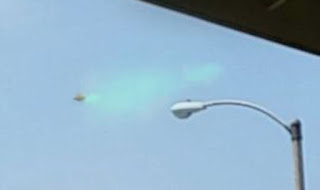 The witness said
“The vapour trail didn’t seem to be coming from any particular vent or place on the craft, it seemed to almost enshroud the craft and then slip off and fall behind,” he added. “It would leave a trail and dissipate within a few seconds.”
The green smoke was accompanied by a strange rumbling sound, this rumbling hiss increased in its intensity as the misty green vapor or smoke formed clouds that followed the path of the UFO.
People looked on in amazement which slowly gave way to anxiety as they realized the area was being sprayed with and by something unknown.
This mystery vapor could possibly be poisonous or radioactive, one witness said he almost threw up his breakfast in worry. A couple of good pictures of the object were captured, they show the dome shape object high in the air meaning it is difficult to estimate its size but those that were there claimed it to be a similar size to that of a school bus.
Many in the UFO community said that it is a suspicious craft saying it could be man-made or some acquired alien technology being secretly operated with the intention of making the public believe it was aliens.
This providing a cover story for the human operators of the UFO so that they may perform secret experiments consequence free.
Just as easily the same scenario could apply if aliens were piloting the UFO, if it was extraterrestrials we can only speculate on their motivation.
A craft of similar size and shape to that of which was seen in the Californian sky was also recently spotted in the skies above Derbyshire town.
Dozens of residents posted on their social media about the spotting of a ‘neon green flash' that they claimed was made an Unidentified Flying Object flying over the county in the late afternoon.
A witness named Debbie Pickard, said she saw "three flashes of green light" as she looked out of her office window during the evening.
The 37-year-old principal added: "It was as if something shot through the houses. It did not look very high and it looked like it was travelling horizontally.
"I checked the range that drones could travel, as I heard a lot of talk about it in Beeston, which is a good few miles away, so it couldn't have been that.
"It's a UFO by definition. It was like someone had thrown a frisbee. Me and my dad spotted a similar thing in 1988, it was in the papers then and confirmed on Gatwick radar.
"You do wonder what these things are."
She then added that she hadn't manage to take a photo of the unusual "neon green flash" as it was gone in a matter of "seconds".
Others said that the flash of light was a blue colour and formed a crescent shape. Could these flashes be the UFO doing some unknown experiment, could this flashes be the cause of the changes in color of the night sky in Stockholm and Spain?
Another resident, from Beeston, wrote on Facebook:
"I've just seen a bright light streak across the sky going northwards in Beeston.
"It wasn't a firework or aircraft."
There was another report from East Leake, with other similar sightings of a 'fireball' in Stoke-on-Trent, Sheffield and even as far north as Edinburgh. Dash-cam videos posted online display a clear blue 'fireball' type object shooting across the sky.
Explanations for these sighting have been hard to come by some People on social media made suggestions that it could have been the International Space Station, a cockpit display panel, an F-15 fighter, or a spotlight from the university.
All of which seen highly unlikely.
So what do you think is causing the changing color of the sky in many parts of the world, is it linked to these mysterious flying objects and are those UFOs piloted by men or aliens?
Let me know what you think in the comments below.
at May 22, 2020