Bigfoot and the many subspecies have been investigated for many years various types of proof have been gathered over the years some more convincing than others.
The discovery of a body or partial remains of one of these creatures would make headlines worldwide.
So if a living relative to one of these animals lived you would think that it would be known globally.
There is such a case, a story known to those that have an interest in Sasquatch and wild-men but not known by the wider population.
A story that has a Russian beast a woman and her children at its center.
I am of course talking about the Abnauya, Zana and her sons and daughters
This cryptid is said to be one of the Russian species of Bigfoot, a little less well known when compared to the Almas, as with the Almas its home is said to be deep in the Caucasus mountain range.
The Caucasus Mountains is a mountain system in Eurasia lying between the Black and the Caspian Seas in the Caucasus region. It occupies parts of Russia, Georgia, Azerbaijan, and Armenia, drifting mainly from northwest to southeast. The Caucasus Mountains are made up of two separate ranges, the Greater Caucasus in the north and the Lesser Caucasus in the south.
This providing a huge sparsely populated area perfect for a species like the Almas and Abnauayu to make their home.
The Abnauayu are around the same size as human but way more muscular with a thin covering of reddish-black hair, a low brow, reddish eyes, and high cheekbones. This appearance being what many think of when they imagine a Neanderthal. In fact it has been suggested that they could indeed be a relic population that has survived into modern times.
As with Neanderthals it is said they are adapt at making and using stone tools but do not seem capable of speech or if they do have speech it is of a type we cannot understand sounding like a mix of gargles and groans.
This bring us to Zana or Zanya a woman who was claimed to be one of these primitive human like creatures.
Appearing to local villagers around 1850, she avoid people but return to watch people in the villages. Eventually she was captured by a group of hunters from the villages. They had been scared by her watching over them and feared that she may be dangerous.
The tale says that Zana had dark skin long dark hair and was of immense strength, she was wild and animal like in nature. This is just the start of a long ordeal for the wild-woman over the coming years she would be treated and traded as if she was an animal.
She was bought and sold many times after passing through a series of owners, before she ended up with a man called Edgi Genaba. He took her away, shackled and chained, to his estate in the village of Tkhina on the Mokva River, 78 kilometres from Sukhumi. Where she remained until her death in 1890.
In all of the years that Zana lived with various village men she never developed the ability to speak, she was however “tamed” and could complete chores for her owners. It would seem her duties would go beyond housework with Zana birthing children, four of which grew to adulthood.
Zana was pregnant several times by various men, and, giving birth without assistance, she always washed the newborn child in the cold water-spring. The half-breed infants, unable to survive these ablutions, died.
Zana’s did eventually have 4 living children who were taken from her and raised by other villagers. The sons was DZHANDA, (above) & Kkwit. the girls, Khozhanar & Gamassa. The father or fathers of these children remained unknown but I think it would be a safe bet to say it was the men who traded her. Today her children have their own families and Zana’s descendants are dispersed across Abkhazia.
This is when Russian professors Alexander Mashkovtsev and Boris Porshnev enter the picture, during the 1960s they investigated the story. They searched for the remains of Zana but could not find them this despite the fact she was allegedly buried in the family graveyard. They did however find the skull of her son Khwit who had passed away in 1954.
Anthropologist and Bigfoot researcher Grover Krantz brought his scientific expertise to the case and in 2009 took the skull of Zana’s son to a New York laboratory for DNA sequencing this in the hope of uncovering genealogical lineage that was outside of the norm.
The analysis revealed Khwit’s skull to be 100% homosapien. 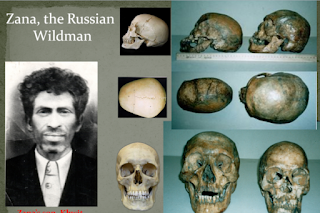 This finding obviously cast a shadow of doubt over the story of Zana, was she in fact a human woman who may have grown up in the wild never learning to speak, could she have had a disability, this explaining why she was alone in the woods maybe her family had abandoned her to the wilds unable to cope with a disabled child, her disability also meaning she was unable to communicate with the villagers she stumbled upon after years alone in the mountains?
Others say no, she was an ancient relic species of humanoid and that her genes were so similar to our own that we lack the testing to find her genetic code. The fact that the tests are being carried out on her off spring further diluting results which would show her to be a unique species separate to modern humans if Zana’s remains could be found and tested.
They say that Zana was a surviving member of a thought to be extinct Hominoid most probably Neanderthal or Denisovan.
The Russian Bigfoot. Zana a living Neanderthal?
They point to the idea that these two types of hominid are said to have gone extinct because of two major factors, the first conflict and completion with early modern humans, the second interbreeding.
The Neanderthals and Denisovans were bred out of existence their genetic makeup becoming part of our own, this would make the testing of Khwit appear to be identical to that of a modern man.
The interbreeding between different early hominin species was not the exception – it was the norm,’ according to Omer Gokcumen, PhD, an assistant professor of biological sciences at the University at Buffalo’s College of Arts and Sciences.
The expert has researched human evolution and discovered an important mucin protein called MUC7 which is found in saliva.
The doctor said ‘When we looked at the history of the gene that codes for the protein, we see the signature of archaic admixture in modern day Sub-Saharan African population.
This protein is, in part, responsible for the slimy consistency of saliva, and helps it to bind to microbes. In turn, this helps keep the body free from disease-causing bacteria.
The doctor and his team studied this MUC7 gene looking at a group of more than 2,500 modern human genomes, this revealed that a group from Sub-Saharan Africa had a ‘wildly different’ version than others.
On closer analysis it was revealed to be even more different to modern humans than Neanderthal and Denisovan MUC7 genes.
This discovery suggests that ancient human ancestors can be traced to these populations of hominid and that ‘sexual rendezvous’ with what has become known as a ‘ghost’ species did occur.
Could Zana have been a member of this “ghost species?”
Zana was very tall, with massive and broad body, she possessed huge breasts and buttocks, thick muscular arms and legs, and fingers that were longer and thicker than those of a regular human. She could also splay her toes widely and move all of them apart the big toe.
Her face was said to be terrifying; broad, with high cheekbones, flat nose, turned out nostrils, muzzle-like jaws, and wide mouth with large teeth, low forehead, and eyes of a reddish tinge.
Zana was stronger than the strongest man said to be able to crush the hardest walnuts in a single hand she could outrun a horse, and swim across the wild Mokva River even in a violent high tide.
Seemingly without effort she lifted with one hand an eighty-kilo sack of flour and carried it uphill from the water-mill to the village. She climbed trees to get fruit, and to gorge herself with grapes she would pull down a whole vine growing around the tree. She ate whatever was offered to her, including hominy and meat, with bare hands and enormous gluttony
Over her life it was said that she had no grey hair, lost no teeth, and remained strong and fit until her death.

The description of her physical characteristics and abilities matches the many stories of Bigfoot and Bigfoot like creatures found around the world. So can we assume that these animals are far more closely related to us than we would like to think?
Are they the missing link between us and some of our earliest relatives, until the remains of Zana are found or a body from Sasquatch is discovered we are left to ponder these questions, and ask if Zana was an Abnauayu or Almas and the proof that is needed to confirm the existence of these cryptid hominids?
What do you think, Almas, Neanderthal or something else?
Let me know in the comments below.