The Black Monk of Pontefract.

The topic of Ghosts and investigations into paranormal activity has been gaining in popularity of late. Many television shows document ghosts hunts and the adventures of paranormal investigators.
Most of these shows come up short in the evidence which they gather.
One location they should be descending on is the town of Pontefract. Pontefract being a historic market town in West Yorkshire, England. This old English town is famous for its cakes, small, black, circular sweets made of liquorice.
It is also famous for its ghosts with one in particular being said to very dangerous!
A rather volatile, frightening, and violent entity that has come to be known as the Black Monk.
The story begins at Number 30 East Drive, on the Chequerfields Estate, East Yorkshire, Jean and Joe Pritchard, their son Philip, aged 15 and daughter Diane aged 12 called the house home.
For a number of years they lived happily at the address this was until strange phenomena began to occur, working in cycles, which would sometimes see activity on a daily basis, broken by long periods of silence, sometimes lasting for weeks at a time, but eventually, the weird goings-on would resume.
Water pools, lights flicking off and on, furniture being tossed around, pictures being torn, objects flying through the and even levitating in place, knocking and banging sounds, disappearing and reappearing objects, foul smells, bizarrely farmyard noises, with heavy breathing sounds, sudden temperature drops and the appearance of an entity that is believed to be causing all of the chaos.
A mysterious black-robed figure that would become known as the Black Monk of Pontefract.
The strange events started back the August Bank Holiday week in 1966. The Pritchards’ had been holidaying in the southwest of the country leaving their son 15-year-old Philip at home with his grandmother, Sarah Scholes. 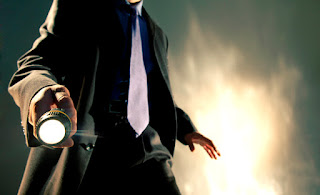