Mysterious disappearances are always confusing, sometimes people just up and vanish, often personnel problems and life’s pressures prove to be too much and they choose to walk away.
Other times its strange locations that are areas that seems to be a magnet for the missing, famously the missing 411.
Often the explanations offered for these vanishing are tragic but not anything that that would need us to think outside of the box.
Accidents, suicides and run a ways.
This being said there has been a number of disappearances that are not so easily explained, this because whole groups of people have just vanished into thin air leaving little to no trace to what happened to them.

War is chaos. Death, destruction, and terror all of this is part of any battle.  Battles and stories of war have a tendency to grow in legend and create many mysteries, and amazing stories. One such story begins in 1918, World War I had finished, and the War Graves Commission searched the battlefields of Gallipoli for the remains of the 36,000 Commonwealth servicemen who had perished during the campaign, of these brave souls 13,000 laid in unidentified graves, and 14,000 bodies were never recovered.
Such a waste of life but where is the mystery?
The Gallipoli campaign, took place on the Gallipoli Peninsula of the Ottoman Empire from 25 April 1915 and 9 January 1916. The Allied powers of Britain and France had the objective of launching a naval and amphibious assault against the Turks in an attempt to capture and secure the Dardanelles.
An area which was of great strategic importance as it connects the Mediterranean with the Black Sea serving as an essential sea route for the Russians, allies of the Turks and Germans.
The ill-conceived plan was to push through and forcefully take the city of Constantinople the Ottoman Empire’s capital, this would in affect remove Turks from the war.
Fighting this bloody were campaign were the men of the Sandringhams, a military unit that had been created in 1908 by King Edward VII, comprising  of men whom  had been recruited from the staff of the royal Sandringham Estate.
To create a larger force these men were rolled into 5th Territorial Battalion the Royal Norfolk Regiment, or “The Norfolks” as they became known. The Norfolk’s in turn being given the title of “The Vanished Battalion".
How did they become known by this name?
On the 12 August 1915 the battalion was seen by men from other units marching off into battle against the Turks at Suvla Bay, they were never seen again. The Dardanelles Campaign ended on December 1915 and all of the British and Commonwealth troops that survived were evacuated.
Command made the assumption that any men who were missing had been killed, or captured by Turkish forces and held as prisoners of war.
The British wanted to account for these disappearance of their men and asked the Turkish government if they had taken the men as prisoners, but the Turkish government denied having any knowledge of the “The Vanished Battalion".
The British continued to demand for the return of their fallen soldiers, but again the Turks adamantly denied having them, and indeed declared that they had never even heard of “The Norfolks”.
Years later The War Graves Commission searched for war dead on the battlefields of Gallipoli, they had some success, recovering 14,000 of the 36,000 Commonwealth soldiers who had sacrificed themselves in the bloody campaign. 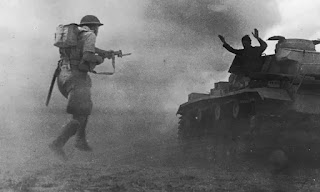 13,000 were found in unmarked graves.
It was in one of these graves that a Rev Charles Pierrepoint Edwards uncovered a Norfolks regimental cap badge, along with 180 bodies scattered about and around a farmhouse surrounded by the wooded area in which the men had last been seen. A further 122 of the bodies were found to have shoulder badges that identified them as members of the Norfolks, and one was even identified by his shoulder flashes as Lt-Col Beuchamp.
For many this was the definitive proof that the regiment had been captured and killed, but as the years continued to pass the case of the “Vanished Battalion” would get stranger and stranger.
This all begins with the then British army officer Sir Ian Hamilton, the man was one of the chief commanders overseeing the Gallipoli campaign. He wrote;
"In the course of the fight, there happened a very mysterious thing. The fine company enlisted from the King's Sandringham estates charged into a forest and were lost to sight and sound."
He added the ominous words "Nothing more was ever seen or heard of any of them"
This turned the incident from a wartime tale of tragedy to an eerie battlefield mystery.
A survivor Sidney Pooley disputed this story. He would say "I did not see any wood into which the officers and men could have disappeared, I know absolutely nothing about how the officers and men disappeared. I heard no news about them charging into a wood until I came home."
We also have the account of Reverend Pierrepoint Edwards who discovered the bodies, He wrote, "The whole thing quite bears out the original theory that they did not go very far on, but got mopped up one by one, all except the ones who got into the farm."
However, It has been said that Edwards privately told that the soldiers had all been shot in the head, executions carried out by unknown people. Arthur Webber another survivor, said he heard his fellow soldiers being ruthlessly rounded up and slaughtered by the Ottoman enemy.
So it would seem these men were the unfortunate victims of wartime brutality, well not so fast this story has a strange twist.
The case would become the topic of debate when  in April 1965, New Zealand WWI veteran Frederick Reichardt, along with two of his brothers in arms, gave their story of what happened to the men of the Norfolk regiment.
Reichardt told tale that they had been sappers with the New Zealand Expeditionary Force and the men had been operating in an area near a Turkish position known as Hill 60, this location was not far from the place the lost Norfolk Regiment had been fighting.  The veteran claimed they noticed between 6 and 8 odd, grayish brown, “loaf shaped” clouds hovering over the battlefield. These strange clouds were said to be completely still even when there were high winds blowing at the time.
Below the clouds ‘or let’s just say it UFOs ‘ was another, even larger and denser looking cloud like object that was  estimated as being around 800 feet in length and around 200 feet in height.
This massive cloud (UFO) according to the men was hovering over a dry creek bed this was just as the Norfolk Regiment approached, the battalion did not stop marching they walked directly into what was above the creek bed. Reichardt claimed that it was at this point that the cloud slowly began to rise upwards to joining with the other strange clouds, the soldiers seemingly disappearing with it.
This account of the British soldier’s disappearance was first published in the September/October edition of the New Zealand UFO magazine Spaceview back in 1965.
The story told by the man and his fellow servicemen was corroborated in 1966, this when another New Zealand veteran a one Gerald Wilde, told the UFO publication that although he had not seen the, what could be classed as an abduction, directly, he had heard the many stories told by soldiers, these stories telling that the Norfolk Regiment had vanished into a cloud which was straddling the ground to never be seen again.
This legend went against all the official conclusions of what had happened to the men, it became a story UFO enthusiasts would regularly reference when discussing abduction theory, a missing persons case that would suggest alien abduction as a cause for many missing people.
This sinister tale of cloud-shaped UFOs whisking away a whole regiment of men in the middle of a battlefield grew and grew something about it capturing people’s imaginations. It gained such popularity amongst the general public that the British Ministry of Defence and the Imperial War Museum were constantly bombarded with letters requesting that they release any top secret files that they have on the alien abduction and subsequent covered up.
So we are left asking “what really happened to the Norfolks?”
Did they die on that battlefield or were they adducted by extraterrestrials?

The veracity of this mystery has been questioned, the story is said to be full of inconsistencies and inaccuracies, wrong dates and even the wrong battalion number.
Reichardt claimed the incident happened on August 28, 1915, when in actuality it had been carried out on August 12. He also claimed it was a quarter of the battalion that had vanished, when actually the first and fourth were a sister battalion held in reserve, it had been the first and fifth battalion that had charged into battle and vanished.
An important fact is that we have the clergyman Charles Pierrepoint Edwards who discovered the field of bodies in 1918. . This finding suggested that a war crime was the reason for the disappearances rather than an alien presence
Also the Allied commander in charge of the Gallipoli Campaign, Sir Ian Hamilton, also made efforts to dress up the massacre as something more mysterious and unexplained.
This to cover his handling of a series of botched missions, mishaps, and poor planning.
The officer not wanting to risk his reputation by admitting that his poor leadership and foresight had led to the pointless slaughter of so many men.
I have a theory that everyone is actually correct to some extent, maybe the cloud that is thought to be a UFO were actually smoke bombs, these smoke bombs used to cover an assault on the Norfolks by Turkish troop.
The operation being a success and the Turks then being left with a large group of prisoners, not knowing what to do with the men the heinous order of execution was handed down.
The cover up after the event was not to hide the presence of an alien craft but to cover for the surviving Turkish commanders who have undoubtedly been handed a death sentence for their crimes post war.
Nevertheless, the idea of a brave battalion valiantly charging into battle and then mysteriously vanishing to never be heard from again is a compelling and powerful tale that captures the imagination
And if this event is not strange enough how about Weird Cases of Whole Towns that disappearing leaving no a Trace? 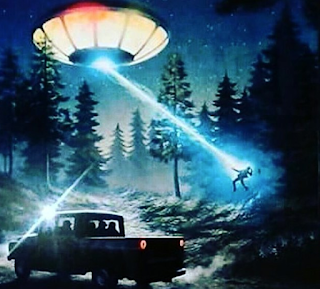 So was this aliens, or the paranormal were these people unfortunate victims of a natural disaster?
A number of mundane Theories have been proposed as answers one is that that these homes are the abandoned set of a movie or the site of a bout of radon or carbon monoxide poisoning.
Today these towns and houses are left rotting away, lost to the tides of history, and the stories tied to the locations have passed into urban legend.
Spooky tales to stir the imagination!
So what do you think, aliens, ghost, or Mother Nature or maybe just over active minds and hard times, what made these people vanish?
Let me know in the comments below