The taxonomic method of species identification

You guys seem to enjoy the recent video on the Merrylin museum and its strange artifacts so I found an article on the similar subject of Taxonomania.
Taxonomania is the study of creatures that are claimed to be completely fictional but in some cases crosses into the realms of cryptozoology.
Catalogs of Invented Species, From the Pop-Eyed Frog to the Loch Ness Monster, let’s take a look at this subject that brings together taxidermy, cryptozoology, and zoology and see just what creatures we find. 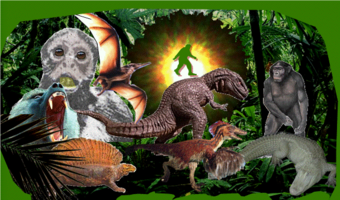 No matter how diligently researchers try to keep fiction out of research papers on occasions things do find their way through the cracks. Sometimes this is done with malicious intent with people trying to corrupt real research programs other times it’s purely by accident.
Looking at the book by Michael Ohl’s “The Art of Naming.” We can see how the Austrian entomologist Hans Malicky used this to his advantage.
The Austrian entomologist is consider a world authority on the study of caddisflies. The man is also know by the pseudonym Otto Suteminn. This alter ego wrote papers on the discovery of two new flea species from Nepal, Ctenophthalmus nepalensis and Amalareus fossorius.
Most didn’t see anything strange in the names given to these new types of flea or the description and claimed locations that these insects were said to have been found.
Eventually people who looked a little closer at this discovery found that the discovery was a complete fabrication.
In 1972 a short article was printed in the Entomologische Nachrichtenblatt by F. G. A. M. Smit, a well-known flea researcher at the Natural History Museum in London. Its title was “Notes on Two Fictitious Fleas from Nepal.”
Smit picked through article piece by piece and line by line, he uncovered that almost all the information was bogus. Not just the details of the two fleas, but also their mammal hosts, Canis fossor (“canine gravedigger”) when the Latin is translated and Apodemus roseus (the “pink wood mouse”), are both animals of complete fantasy, hoping to sell his scam Malicky  included flea species that are real as comparison.
Moving on from insects to amphibians and in 1978, the “pop-eyed frog” was added to the journal of the Herpetological Association of Africa. Given the scientific designation of ‘Rana magnaocularis’ biologist and zoologist were excited by the new find.
The animal was described as being flat with huge bulbous eyes protruding from the head, a prominent tongue unusually extending out of the mouth, body and limbs highly flattened dorso ventrally. Dorso lateral fold absent. Otherwise resembles Rana pipiens.”
Rana pipiens being the Northern leopard frog
The northern leopard frog is a species of leopard frog from the true frog family, native to parts of Canada and the United States. It is the state amphibian of Minnesota and Vermont.