We haven’t had a Bigfoot video in a little while, I have looked at Sasquatch like creatures from many parts of the world. I always like to find the wild humanoids that are a little less well known.
Asia is said to be home to animals like the Batutut and the orang pendek, Japan also has its own version
“A Dreadful, Real-Life ‘Monster’ that it is said looks Like some kind of evil Ape” 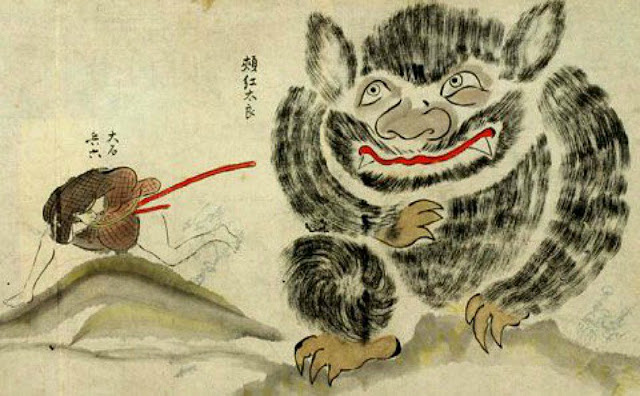 Beasts which have a somewhat man like appearance are often featured in myths and legends from different cultures around the globe. The most famous ‘wild man’ of today has to be the Sasquatch or Big Foot of North America, this cryptid humanoids fame be closely followed by its cousins The Abominable Snowman – or Yeti – of the Himalayas.
We can also head down under and fin that Australia has their own man-beast “the Yowie”. Zipping across the water to Sumatra and we come across the Orang Pendek, This wild man of the jungle not matching the size of its relatives from the north and is thought to be a small unknown ape that walks upright.
South America has it Reports of large violent apes and we cannot forget the Russian Bigfoot also known as Almasty or Almas.
For many who casually view the subject of cryptid wild men they may think that that the legend of Big Foot is a modern concept.
A debate that was thrust into to the public when the controversial Patterson film was released, a film in which a live Big Foot is seen walking across a river bed and into the woods. The short movie was captured in in the autumn of 1967 at   Orleans, California.
This short clip has rarely been out of the public eye since first receiving widespread attention from MSM back in the late 60s. This thrusting Big Foot into the public domain and making the cryptid a modern popular culture icon that has since featured in movies and TV shows.
All of which were inspired by the hairy humanoid that was caught on the tape.
The truth is that wild men are an ancient phenomena, a phenomena as old as humanity itself.
Probably the earliest surviving reports or stories of a wild man are those that describe the Enkidu (Enki’s creation) this wild men being in the Epic of Gilgamesh, which was penned over four millennia ago in ancient Mesopotamia.
Enkidu is an important of the epic, described unflatteringly as an uncivilized wild savage, more animal than man, the characters story begins with him being raised by animals and living amongst herds and game in the wilds of the ancient kingdom.
Always on the fringes of society Enkidu was considered the embodiment of the natural world and is the antithesis of the cultured and eloquent hero “Gilgamesh”.
Something that is unique to Enkidu and is something that has not been part of wild men legends in other parts of the world is that it is possible to tame his savage side. The epic details how He is taught the traditions and customs of the civilized world by of all people a prostitute named Shamhat.
I guess the love of women can tame the heart of a beast.
Enkidu spent seven days (cough cough) enjoying her company which resulted in the animals rejecting him when they sensed her human scent on him.
Maybe Enkidu just needed a little tenderness, women are after all consider a calming influence on men or at least they were in the days of old.
Enkidu then goes on to become a loyal companion to Gilgamesh and his tragic death deeply causes much pain for the cultured hero, the bereavement inspiring him to seek out immortality.
This story illustrates how wild men or the idea wild men has always been with us.
Greek and Roman myths were also filled with tales of wild men and they were said to be sexually voracious creatures.
Depictions of the wild man figures showed them as gods of nature and the wilderness along with fertility obviously! 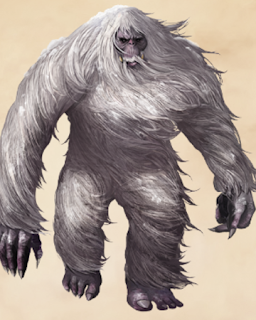 Historians have recorded how these wild men figures seem to all be rooted in ancient legends from Neolithic cultures across modern day Europe and Russia
But as we know there are just as many tales from the opposite side of the planet.
You don’t, however, get too many reports from Japan.
That being said there has been a few.  In August 1973, a fantastical story appeared in the Japanese media this story adding to a land already swimming in ancient monster legends.
To quote the article it begins saying:
“A dreadful, real-life ‘monster’ that looks like an ape and smells like decaying flesh has been observed by several reliable witnesses in the mountains of Japan, near Hiroshima. The creature may be the product of a mutation from the deadly atomic radiation unleashed when the first A-Bomb was dropped on that city more than a quarter-century ago, according to some investigators. Eyewitness reports indicate that the monster lurks amid the low shrubbery clinging to the foothills of Mt. Hiba. The area, one of the few wildernesses that teeming nation has preserved, includes Hibayama National Park.” The article continued: “A typical sighting of the creature is reported by one Mr. Sazawa, the owner of a dry-goods store near the town of Saijo. Mr. Sazawa was scrambling through the foothills digging wild sweet potatoes when he saw the thing.”

In Sazawa’s very own words: “It is about 5 feet tall, with a face shaped like an inverted triangle, covered with bristles, having a snub nose and large, deep, glaring eyes.”  The media coverage continued: “Mr. Sazawa is certain what he saw is not a monkey, for monkeys in Japan grow no taller than 3 feet at the most. The accumulation of these and other bits of data has led to increasingly intense speculation. Is this a gorilla? A wild man? A deserter from the Japanese army, hiding in fear? Or is it the offspring of some unfortunate peasant, grossly deformed by the ravages of atomic radiation?”
Mr. Sazawa was not the only one to witness the strange ape like creature the previous year 1973. A Mrs. Reiko Harada from the town of Hiwa, claims that she saw the beast when she was making her way home with her small son, the women was startled when she heard the sound of rustling in the brush.
To her shock and surprise something that looked like a gorilla stood up from the bushes at the roadside. It raised its arms, she said, a gesture often made by gorillas.
The women described the beast saying its face was a chocolate like brown in colour, and she remembered that its body was covered with thick dark hair.
She told the media: “When I saw that monster, I suddenly went numb and couldn’t walk. I started shaking with fear, but then, somehow, I got the nerve to pick up my little boy and run.” Later that very same evening, the press noted, “four residents armed themselves heavily and went hunting for the beast. They saw nothing but trampled shrubbery. But, one reported, ‘the place smelled like a dead body after it starts composing.’”
The Japanese Bigfoot as it has come to be known has yet to be identified by the authorities some 30+ years after the encounter.
And although the Japanese Bigfoot is infrequently seen, they still remain an elusive animal lurking in the minds of cryptid fans and monster hunters alike just like their more well-known American cousins.
These legends and tales of wild men are somewhat of a dichotomy. The wild man is often used to represent of what humans would devolve into if we were to lose civilization. A cautionary warning that without civilization we could become a wild man a dangerous savage beast who kidnaps children or attacks the innocent.
For others, the wild man can represent a romantic concept. A less complicated life living in tune with nature and void of the stresses society and civilization bring.
As our civilization grows and evolves, we find ourselves more and more relying on technology and the environment in which we live is an increasingly crowded place.
The chance that there is still a wild man undiscovered in the woods or mountains somewhere is particularly exciting to many of us, a glimpse of freedom something that has been as mush of an allure to us as it had been for our ancestors thousands of years in the past.
Do you believe in the many types of wild men seen around the world, are they members of the same species or are they something else?
Let me know your thoughts in the comments below.

Email ThisBlogThis!Share to TwitterShare to FacebookShare to Pinterest
Labels: #cryptids #Cryptid, Christmas Cryptids the three wise men and an unidentified flying object?, Ropen and other Cryptid sightings, The Japanese Bigfoot