what is a Snallygaster?

It’s time for a cryptid here on we are if and this time it is a creature with a fantastic name. An animal said to be combination of many other creatures making for something that is very unique.
This creature has a history with presidents has been said to be nothing more than a hoax while others make claim of real frightening encounters.
So what’s the name of this mysterious beast?
The Snallygaster!! 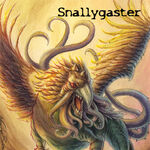 So what is a Snallygaster?
For those that have not heard of the strange beastie, the term was first used as bit of a catch all for any type of bizarre monster.
The great word has an old dictionary definition which reads: “mythical, nocturnal creature, half bird and half reptile, chiefly reported in rural Maryland which preys on children and poultry.”
Tracing the stories back we find ourselves with the first European immigrants arriving in the United States. These people introduced tales of the monster from their home countries and the legend of the Snallygaster quickly spread in the Middletown.
People began to see the monster with these sightings reaching a peak during the 20s it got to such a frenzy that parents were keeping children home fearing an attack.
The story tells that the Snallygaster appears on a twenty year cycle. They lay eggs which are kept incubated for two decades this has led to the idea that the cryptids the Dwayyo, and Sykesville Monster, were the Snallygaster’s hatchlings.
So what is it that people have reported seeing?
The Snallygaster is an enormous avian said to attack people and animals in and around the state of Maryland, USA. This dragon-like beast is said to dive silently, swooping from the air on to unsuspecting animals and even children.
The appearance of the beast is said to be that of a reptilian like bird with a huge metallic beak filled with large sharp teeth and tentacles which shoot from the beak when the cryptid attacks, these may possibly me some strange tongue like appendages.
With a single eye in the middle of its forehead, the creature also, for added effect, emitted a screech like “a locomotive whistle.”
This odd description for a creature is common in that part of the world we see similarities with other cryptids like the “Piasa bird” which I covered way back in the video linked above.
The Piasa is a story native to the Americas the Snallygaster was originally a German tale.
Back then the monstrous bird like beast was called a Schneller Geist, meaning “quick spirit”.
It was also thought to be a vampire like creature, it would suck the blood of those it swooped upon. They could protect themselves not with a cross as is the case with vampire lore but a Heptagram, a seven pointed star.
If you feared an attack from the “Schneller Geist” painting this symbol on your home would ward the cryptid away.
So we our left with an animal that has a real description and could be considered an actual unidentified species to characteristics that would make it seem a little more on the paranormal side.
So What Was Really Behind The Snallygaster Sightings?
Let jump back to 1900, a time when Marylanders started to tell of sightings of a shape-shifting, monstrous winged creature near to the Southern Mountain.
The stories that were being told were seized upon by journalist of the day, the stories made for a good read and with each retelling they grew ever more fantastical. This carried on into the 1950s the legend of the animal growing year on year.
This when a real life living legend stepped into the story.
President Theodore Roosevelt, the swashbuckling 26th president of the United States partnered with the Smithsonian Institution they began to pursue their interest in the sightings of the Snallygaster.
Scientists from the museum and the president began a hunt for evidence of the Snallygaster. This in an attempt to support the various scientific theories they had about the mysterious creature.
Teddy Roosevelt who had hunted some exotic game before, was up for the challenge the illusive crytpid provided.
A local newspaper even posted a story that said President Roosevelt was seriously thinking about canceling his much published African safari to track the mysterious specimen down. This decision coming out of the idea that there was a wild and dangerous animal on the loose.
A 1909 article claimed that a man had been captured by the winged cryptid, and that the snallygaster had bitten into the jugular of the unfortunate victim, draining his body completely of blood then casually tossing the remains over the edge of the cliff where it had eaten its bloody meal.
Local newspapers jumped at the story and continued to hype the dangers of the snallygaster they even published the reports of and several claimed eyewitnesses.
The stories recanted to the writers of various newspapers range from the weird to the ridiculous one claimed to have seen an egg the size of a barrel allegedly laid by the monster bird, another told of how a railway worker was lifted up by his suspenders, and there was even one account of the crytpid speaking to a man, mysteriously declaring, “My I’m dry, I haven’t had a good drink since I was killed in the battle of Chickamauga!”
These stories had many crying fraud and fake, people out to make a quick buck with a made up story that newspapers were quick to publish.
Later investigations uncovered evidence that the newspaper used motifs of German folklore, including dragon-like creatures who snatched children and livestock to fabricated stories about the Snallygaster.
This creation of stories and old-country horrors, was a vale for the real and perceived threats locals saw in outsiders and the startling changes of the new century brought with it, this making the emergence of a beast like the Snallygaster was inevitable.
This bringing the story to a close with the snallygaster meeting its end in a vat of moonshine.
Was the creature real? Where was it hiding? Why had only some people seen it?
Let me know what you think in the comments below.

Email ThisBlogThis!Share to TwitterShare to FacebookShare to Pinterest
Labels: l #alienabduction, Lake Monster sightings 2019., paranormal beasts, what is a Snallygaster?