The men in black are a familiar story when one is looking at ufology, these eerie looking men and women are said to be dressed in dark non-descript suites and are often reported during or after UFO and paranormal events. The appearance of these, alleged government agents has long been discussed and today they are very much a pop culture phenomena as much as they are an unsolved mystery, there is however another group of mysterious characters also dressed in similar clothing. They are the opposite of the MIBs dressing in only white.
Let’s take a look at the MiWs “the men in white” and see what we can uncover. 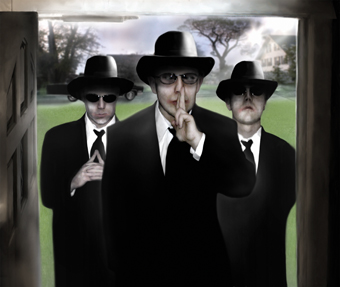 Are the men in white hallucinations, paranormal beings or maybe extraterrestrials?

It seems the only way we can really classify them is by the events at which they appear and what their actions are when they do show themselves.
Could they be angelic beings after all the white clothes would match with stories told of angels.
The clothing may have changed to something more modern over time, biblical appearances having them in robes and clothing suited to that period of history and the iconic image of popular culture, today the clothing being suits fedoras and smart shoes. A modern update to ancient entity.
Do they have any connection to their black suited brethren?
For the moment it would seem there is no way to know, and these impeccably dressed men in white will likely remain specters beyond our understanding.
What do you think the Men in White are, have you had any dealings with the strange beings and had you heard of them before?
Let me know in the comments below.