They are dark dank smelly places, underground labyrinths that many never venture
Into. From the darkness, stories have emerged of everything from giant alligators to a subterranean Sasquatch.
The tunnels beneath the cities are claimed to be home to a number of mysterious Sewer Creatures.
So let’s take a look at world beneath our feet and see what cryptids lurk in the dark. 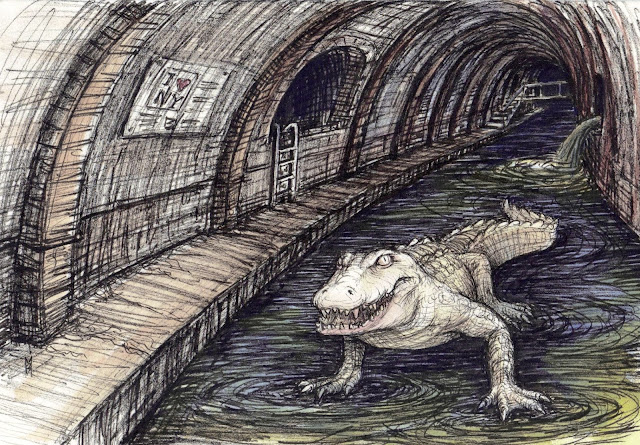 Let’s start out with the most famous of underground terror not so much a cryptid but an animal that many would not think would choose to make a home in the dark, meandering sewers.
Alligators
When talking about these reptiles and sewers, the mind jumps to the reports of the 1930s when it was said these animals had grown to freakish sizes.  Living in sewers changing them from the creature we see in the swamps and everglades to mutants that developed abnormal coloring and other physical anomalies.
So how did they get to be in the stagnant waters under the New York streets?
During the 1930s there was a fad of parents buying baby alligators for their children, not the best decision. As the animals began to grow they become both difficult and dangerous for the children to care so they were flushed down the toilets.
The reptile survived their water ride and began setting up home in the sewers. They were said to live off of rats and garbage and talking of rats they too have become monsters but more on that later.
Many claim that “sewer gators” were or are nothing but an urban myth but they are wrong.
There is much documented history on this story, from 1935 sewer workers were tasked with finding flushing out and killing any of the animals they cam across in the dark.
The was a little exaggeration, they didn’t find any giants the average animal they found killed was around 2 feet in length, but with that being said an older wiser and bigger animal may have been able to avoid the hunting parties.
Over the years more animals have been found some measuring up to 8 feet, it is said that these animals were not hatched in the sewers but wondered in and got lost in the maze of tunnels. One of these was captured and killed and an analysis of its stomach contents revealed the remains of at least two dogs, some rats, and a wristwatch fortunately with no hand still attached to it.
So I mentioned rats again, a creature that most would except call the sewers home.
What many may not know is that these normally small mammals are growing to monstrous sizes, the amount of trash they get to feed on is increasing and the rodents are taking full advantage of the all you can eat buffet of our waste. 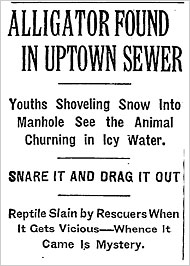 This abundance of food has seen the animals grow to the size of a small dog and they may not stop there.
Rats breed a rapid rate this meaning on a genetic level they are quick to adapt, morph and take on new physical characteristics.
They are also becoming more aggressive and may attack pets but the real danger is disease Weil’s disease is a major threat. A very nasty illness that causes jaundice and sickness.
And a chilling thought to end the talk of rats is that when the food they have been binging on runs out experts warn that they will invade our homes looking for more to eat!!
Could we see a rodent uprising the likes of which has only been seen in stories, like the pied piper of Hamelin.
Another creepy creature that many fear is the spider. Arachnids like to call the dark recesses of our homes their home and can be found in almost any dark spot of a house.
They also like to live in the sewers, the supply of flies must be constant and make for a many easy meals.
There have been reports of this creepy crawlies also growing to massive sizes beneath the pavements of a city that is more associated with another giant lizard “Godzilla” I am of course talking about Tokyo.
Going back to the age of disco the 1970s, utilities workers discovered something very odd in a long forgotten part of the Tokyo sewer system.
While inspecting this part of the sewer tunnel one of the workers felt his foot brush up against something which felt out of the ordinary.
Reaching down to his leg, the workers hand became covered in a mass of silky spider web.
The surprised man saw a mass of web that spread out across the ground and covered an estimated several square meters. The web was a mess of dead and dying creatures everything from insects up to large rats.
Investigating more the man found a tunnel-like opening with a measurement of around 25 cm in diameter. The silk construction was very similar to what is built by the funnel spider all be it much, much large. If the size of the web is any indication to the size of the spider this thing must have been huge. Luckily for the Japanese worker the spider never made an appearance.
Heading back to the United States and North Carolina.
A video was shot that shows a mysterious grey-like alien peering out of sewer pipe.
Captured in 2015 there has still been no explanation to what is seen peering out from the rain water sewer pipe.
The video dated June 24, 2015, along with a later version which was uploaded in March 2016, show the storm drain and then the creature looks out and around the pipe.  It appears almost like some kind of grey alien.
This creature may be surprising to many but it isn’t the first time North Carolina has had to deal with unidentified cryptids in the sewer systems.
Back In 2009, a video surfaced of an “unknown lifeform” or “sewer creature” in Raleigh. The strange animal that was filmed using a ‘snake-cam’ that was being employed to inspect the sewers in the Cameron Village area.
The creature was given the unflattering moniker of “poop monster” by those that discovered it and was a strange pink pulsating ball of goop. Many speculated on what this thing could be.
Was it some alien larva incubating in the warm damp sewer, maybe it was a new type of lifeform like the Blob and it would emerge to engulf the local residents, or maybe it was something a little more mundane?
Ed Buchan, environmental coordinator at the Raleigh Public Utilities Department, identified the slime mass as a colony of tubifex worms.
These animals are more commonly known as sludge or sewer worms, they are rarely seen, and live in the sediment, eating bacteria and polluted organic matter.
They are hardy little guys eating what most creatures cannot they can even survive with almost no oxygen and have reproductive organs that disappear after sex.
They sound more cryptid like than some cryptids!!
These creatures are just a small glimpse of the many animals said to live beneath the streets, if you are looking for more you may try searching for London’s Black sewer pigs or maybe even real trolls and sewer dwelling humanoids.
Would you be brave enough to venture underground and find these monsters, what strange creature have you heard are living underground?
Let me know in the comments below.
As always if you like what I do here on the channel hit that red button like and share
You can catch the latest by searching we are if and if you would like more in the cryptids tales and mystery monsters hop on other to my friends at the venomous fringe linked in the description box.
Anyone that would like to support me and the channel please click the links to my patreon, merch, and other social media provided in the description box
Thanks so much for watching
I’ll see you next time.