An Alien appears on British television.

For those of us with an interest in ufology the one thing we search for is hard proof, physical evidence of the presence of extraterrestrials here on our planet.
Over the years that the subject has been investigated there has been many claimed types or recovered evidence yet that one piece of material that guarantees without any doubt that intelligent aliens races exists and that they are visiting this planet remains elusive.
We see many News outlets reporting on strange phenomena normally it a bit of a joke story after a more conventionally important story.
But what if TV could not only report on the existence of extraterrestrial life but also be the proof we have been looking for

Let’s take a look at that time an alien appeared on TV!! 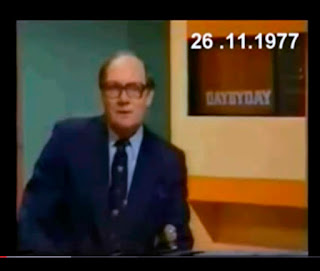 Going back over 4 decades to a time when a popular TV show was hijacked. I am not taking the famous Max headroom prank or some phony joke broadcast. I am talking about an interruption to regular programming schedule by an alleged alien intelligence.
The story begins in the United Kingdom over forty years ago and if you were around at that time and living in the southern part of the country you may well have witnessed the strange event.
It was late afternoon on the 26th of November back in 1977, 5pm to be exact. It was a busy part of the day back then. Kids were coming back inside for some dinner after playing outside with friends, mum was cooking the evening meal and dad was likely to be getting home from work just in time to catch whatever afternoon sport was finishing up on the old television.
For most this was the regular pattern of events and the thought of something as mind blowing as aliens was not in anyone’s mind.
For those of you unfamiliar with how Television in the UK worked at that time, it was divided up into different regions. Different groups held the licensing rights to broadcast regional themed content.
Southern Television was the license holder for the group known as ITV. ITV serviced all parts of the South, South-east and South-west of England.
They had their headquarters in Southampton and Dover and would broadcast their brand of programming across the South from its transmitters found at Dover, Bluebell Hill and Hannington, with others pumping out TV in other parts of the south.
So let’s take a look at what appeared on television sets across the region.
Andrew Gardener the newscaster on Independent Television News was hosting ‘The News’  fulfilling his responsibilities delivering the evening news. The day’s headlines, spoke of problems in Africa and other international stories of importance at that time.
The broadcast was going as normal until 10 minutes in and something strange began to happen the with the picture the sound, Andrew Gardner’s professional delivery was silenced, to be replaced by a distorted voice delivering a quite remarkable message for almost six minutes.
The station engineers went into damage control trying to regain control of the signal, the images flashing across were those that had been planned to be shown but the sound was something completely out of the ordinary.
A message came across the airwaves saying “humanity must stop in their war like ways”
This message was being delivered by an alleged extraterrestrial Intelligence who went by the name “Vrillon”
The alien was said to be communicating on behalf of a body called the Ashtar Galactic Command.
As you can imagine reactions to this message varied from shock to disbelief, many thought that this was some kind of big joke.
Normal service quickly resumed, the station apologizing for what it called “a break in sound”, but by late night ITV’s own news network was reporting the strange happening, and provided some great copy for the next day’s Sunday papers, which gleefully ramped up the suggestions of panic in the streets as the aliens were about to descend upon us.
Well as we today know that “the Ashtar Galactic Command” did not land outside number 10 and sadly nations still war, in fact there are probably more wars going on today then back 4 decades ago.
This because the incident was hoax, a prank pulled by an unknown person or people that have managed to avoid being found even 40 years on.
The jamming of signals and then replacing them with video or audio wasn’t at that time completely unknown; jumping forward 10 years and across the Atlantic to the united  States – on two separate occasions TV stations were hacked. This brining us to the infamous Max Headroom incident I mentioned at the start.
A researcher who looked into the pranks pointed out: “Unlike so many of the broadcast interruptions which came after, mostly in the USA, there is nothing prankish about the Vrillon interruption; there's no punchline or rug-pull, no swearing, or obscenity, or explicit protest of the specific TV station or media in general.
“That keeps it ambiguous enough that there's still this glimmer of possibility – no matter how tiny – that the whole thing was, and is, somehow real.”
still today some say that this was no prank, the prank being a cover story to hide the fact that the earth was contacted back in the 1970s winter news broadcast.
Who knows maybe 4 decades on the Ashtar Galactic Command’s reach will once again look at the mess of the world and reach out to contact you me and anyone else watching the television, maybe this time they will take control of the internet.

“This is the voice of Vrillon, a representative of the Ashtar Galactic Command, speaking to you. For many years you have seen us as lights in the skies. We speak to you now in peace and wisdom as we have done to your brothers and sisters all over this, your planet Earth. We come to warn you of the destiny of your race and your world so that you may communicate to your fellow beings the course you must take to avoid the disaster which threatens your world, and the beings on our worlds around you.
This is in order that you may share in the great awakening, as the planet passes into the New Age of Aquarius. The New Age can be a time of great peace and evolution for your race, but only if your rulers are made aware of the evil forces that can overshadow their judgments.
Be still now and listen, for your chance may not come again. All your weapons of evil must be removed. The time for conflict is now past and the race of which you are a part may proceed to the higher stages of its evolution if you show yourselves worthy to do this. You have but a short time to learn to live together in peace and goodwill. Small groups all over the planet are learning this, and exist to pass on the light of the dawning New Age to you all.
You are free to accept or reject their teachings, but only those who learn to live in peace will pass to the higher realms of spiritual evolution. Hear now the voice of Vrillon, a representative of the Ashtar Galactic Command, speaking to you. Be aware also that there are many false prophets and guides operating in your world. They will suck your energy from you – the energy you call money and will put it to evil ends and give you worthless dross in return.

Your inner divine self will protect you from this. You must learn to be sensitive to the voice within that can tell you what is truth, and what is confusion, chaos and untruth. Learn to listen to the voice of truth which is within you and you will lead yourselves onto the path of evolution. This is our message to our dear friends. We have watched you growing for many years as you too have watched our lights in your skies.
You know now that we are here, and that there are more beings on and around your Earth than your scientists admit. We are deeply concerned about you and your path towards the light and will do all we can to help you. Have no fear, seek only to know yourselves, and live in harmony with the ways of your planet Earth.
We of the Ashtar Galactic Command thank you for your attention. We are now leaving the plane of your existence. May you be blessed by the supreme love and truth of the cosmos.”

Had you heard of this incident, what evidence seen on mainstream TV, magazines and other media do think proves without a shadow of a doubt that intelligent alien species are visiting our planet?
Let me know in the comment s below.