Mars has long been the focus of people looking for extraterrestrial life.
I have looked at the planet a number times, from the early days, when it was thought to be covered in canals and waterways, to today, and the many artefacts that have been identified by groups of keen-eyed observers online.
NASA keeps publishing images and people keep finding anomalous shapes and patterns that they claim to be everything from aliens to Nazi jeeps.
The latest of these finds is said to be some kind of alien insect.
Professor Romoser an Entomologist with over 45 years’ experience at Ohio University claims to have found proof that life is still thriving on the red planet and details what he claims is an insect/arthropod- and reptile-like organisms (both as fossils and living creatures) on the planet.
Could we be facing a future that we have seen in such films as Starship troopers?
Let’s take a look. 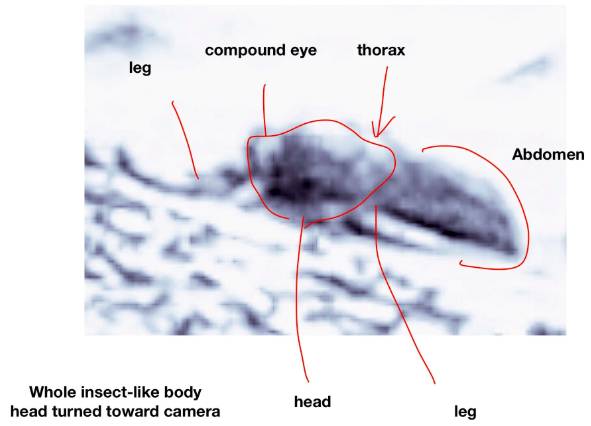 These latest claims of proof of life on Mars comes after Professor William Romoser. He claims to have found photographic evidence of some bug like aliens living in the red Martian soil.
The pictures that you see are said to contain these insects with the professor describing what he sees.
He says that various anatomical structures can be seen in the different photos: 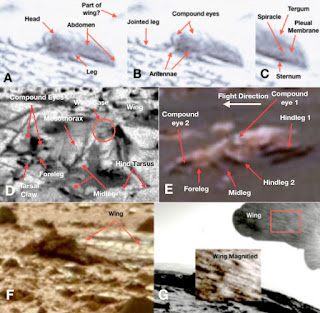 (A – E) and probably (F) are ‘beelike,’ but not necessarily the same type; (A & B) a specimen whose head appears to have turned in the direction of the camera (based on the scale provided in the photo from which this was extracted, this individual is estimated to be approximately 20 inches long); (C) abdomen of specimen from (A); (D) individual on ground with head facing left with head & thorax visible; (E) individual flying with legs evident and, though in flight, somewhat comparable to the specimen in (D); compound eyes and hindlegs labeled in two positions since in motion; relative to (D & E), the locations, shapes, sizes, and appearance of the legs suggest that the forelgs, with putative distal chelate structures, are grasping; the midlegs, digging; and the hindlegs, jumping & running; (F) specimen on ground with wing(s) toward the right; longitudinal veins, cross veins, and wing cells evident; (G) part of wing of specimen apparently caught on the rover; inset: enlarged portion of wing; longitudinal veins, cross veins, and cells are evident.

Image credit: William Romoser, doi: 10.13140/RG.2.2.12363.95520. (ADD TO VIDEO FRAME)
These images have been celebrated by the many the people who say that there is life on Mars. This professor has decades of experience, and is a voice that should be listened to, and taken seriously. He presented his theory on November 19, 2019 to the National Meeting of the Entomological Society of America in St. Louis, Missouri.
In his presentation he told of how he believes that there are many types insect or reptile type creatures living on the Red planet.  He showed that this Martian insect life followed a similar body pattern to life here on Earth.
This is in line with the ideas shared and discussed by those that follow the theory of convergent evolution.
Some of these anatomical similarities are that, The Martian insects have wings, wing flexion, these used for agile flight, Mars having weaker gravity than Earth due to the planet's smaller mass could make flight easier for the Martian insects it may also mean they could grow to larger sizes than the bugs on this planet.
Maybe these giant insects are already visiting us, check out the video linked

They would also seem to use the most popular form of locomotion ‘walking’ as the professor points out the structured leg elements in the photos.
NASA are denying that this is proof of life on the planet, but they have tasked their rovers with searching for organic lifeforms.
The Martian rovers, particularly ‘Curiosity’, have been searching for predefined indicators of organic activity, could the rovers be failing because biological processes work differently on Mars. This then making the chemical reactions that ‘Curiosity’ is searching for useless for detecting these creatures?
Maybe this number of photos does depict the presence of insect and reptile-like forms and they should be investigated further, maybe this is a stroke luck. Like a deep sea rover accidently stumbling across a new form of sea life on this planet.
Could we learn more from the professor and possibly tweak the rovers programming to search them out?
Professor Romoser points out that in the numerous photos we can see arthropod body segments, along with legs, antennae and wings, these features can be picked out from the surrounding area, and there is even one picture that appears to show a Martian insect in a steep dive before pulling up just before hitting the ground.
We do, however have to take into account the tendency for people to recognize patterns in unfamiliar images, pareidolia is when people see recognizable objects or patterns in otherwise random or unrelated objects or images.
I would hope that it is the former, the excitement of finding insect like life on another planet would be a great wake up call to astronomers, scientist and researchers, and may inspire them to search for more complex lifeforms, possibly intelligent life.
Professor Romoser went onto to highlight more anomalies in this picture;
Insect-like forms in flight: (A) at least two apparent insect-like creatures flying close to one another; (B) putative insect-like forms in a darkening sky; (C & D) extracts from (B) with evidence of wings beating (light spots encircling the dark bodies); (E) an insect-like specimen (‘bee’) that appears to have flown right to left from what could be a cave or an entrance to the underground; (F) two putative insect-like specimens in flight contrasted with the darkening sky; insert: enlarged view.
Image credit: William Romoser, doi: 10.13140/RG.2.2.12363.95520. 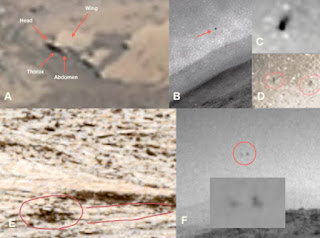 The expert did not just pluck these images from his mind, he highlights how it is easy to spot the symmetry of the body forms from the surrounding rocks. He says that it is easy to spot the segments of the of the insects exoskeletal bodies. This is what led him to identify an arthropod type creature.
He went onto say;
“We can see three body regions, a single pair of antennae, and six legs are traditionally sufficient to establish identification as insect on Earth. These characteristics should likewise be valid to identify an organism on Mars as insect-like.”
“On these bases arthropodan insect-like forms can be seen in the Mars rover photos.”
“Many insect-like creatures and putative diversity were observed. The most common insect-like forms are robust and loosely resemble bumble bees or carpenter bees on Earth. For convenience, I’ll refer to these creatures as ‘bees’ from this point on.”
“The ‘bees’ appear to vary in size and type. Several characteristic insect/arthropod anatomical features were identifiable, not all on the same individual, but as a mosaic among individuals.”
“Distinct flight behavior was evident in many images. In one case observed, the flight maneuver was impressive with the individual ‘bee’ plunging straight down the side of a cliff and leveling off just before hitting the ground.”
“The insect-like fauna observed appeared to be sheltering/nesting in caves, in burrows beneath the surface, and in specialized structures.”
Detailing what he sees in the third and final image as follows;
Insect- and reptile-like forms: (A) frontal view of a putative reptile-like fossil compared to a terran snake: (1) frontal view of putative fossil (circled) in a debris field; (2) enlarged frontal view of fossil; (3) midline symmetry indicated; (4) eyes and small oral opening circled; (5) bilateral punctate structures indicated; (6) large, full-gape, oral opening; (7) eyes, lateral punctate structures, and large mouth capable of gaping are indicated; (8) frontal view of Eastern King Snake head; (9) King snake with eyes and bilateral punctuate structures circled; (B) putative fossil insect on its dorsum with head to the top, and with selected structures labeled; (C & D) apparent predatory behavior showing reptile-like creature with insect-like creature in its mouth.
Image credit: William Romoser, doi: 10.13140/RG.2.2.12363.95520. 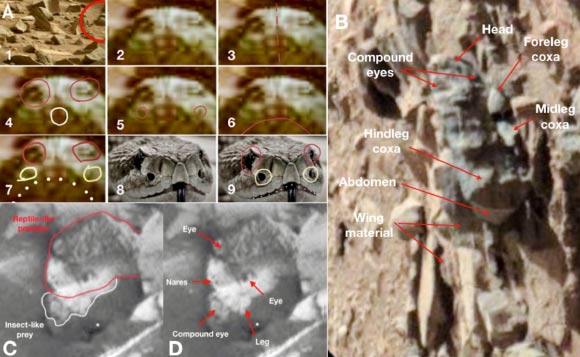 It is clear that the professor truly believes that he has found evidence of insect and reptile life on Mars but do you see the same?
As with so many of the photographs from Mars the objects are open to interpretation and often what one person sees another does not, let me know in the comments if and what you see?