Stepping away from the run on UFO and Cryptid themed videos for a moment. I periodically cover technology and societal changes, especially when these changes may see us morph into something new.
One of these developments has just come to light with the publishing of a planned military program to create cybernetic soldiers!
This really is an idea that has been pushed down our throats of late a real push by science fiction books TV and film.
You could almost see it as marketing campaign
“Upgrade today, make all your problems go away”
However it never works out well for the characters in these stories, so what makes the United States army think they can do better?
Let’s take a look 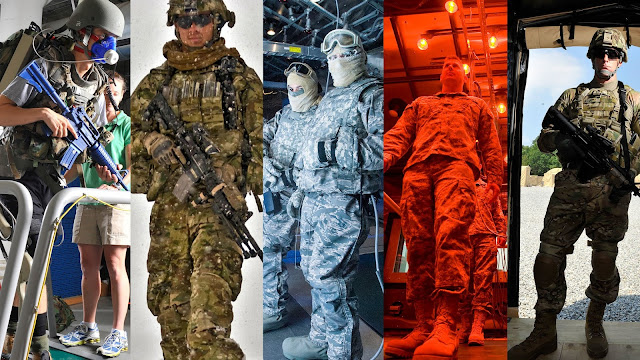 The bbc recently published a story on their Asian news network about Americas plan to create super soldiers. Far from the using some magic potion like we see in the comics with captain America these advance super warriors will be built using the latest in technology.
They will be the world’s first cyborg soldiers.
The Combat capability development (CCDC) Headquarters of the United States Army says that they are currently in development of technology that will enhance the vision, hearing and muscle performance of American troops.
They envision the completion of this plan sometime around 2050, as a rule of thumb we can say that on average a military research program is normally 25 years ahead of what they allow the public to know. This would give us a much sooner date of 2025 for the coming of these cybernetic soldiers.
The CCDC published a report is titled "Cyborg Soldiers 2050: Combining Humans and Machines."
U S Department of Defense "has identified four areas of biotechnology that has been evaluated that should be available to human soldiers within the next 30 years, these include the enhancement of eyes, ears, and muscles.
They are going give these men and women abilities that until now, have been firmly in the realms of fiction.  Like Steve Austin the 6 million dollar man these people will built and this raises all sorts of ethical questions.
The team researching this technology stated that the creation of a cyborg warriors with superhuman abilities, especially the direct enhancement of the nervous system in the brain will lead to a strategic revolution, implementing a truly modern battle plan!
Creating networked people working as a single super unit and possessing abilities far beyond any natural man or woman.
Have they no considered what will happen to these cyborgs after their service?
How will they integrate back into regular society with the super abilities gifted to them by the military, it is already difficult enough for servicemen and women to build a life after the military.
Also what threat do they see coming or what do they have planned for there to be such a need to create super cyborg troops?
Surely if we are advancing to such capabilities, would it not be better to build super humans that could survive the rigors of space. That way we could set out and find another planet and more resources a benefit to all, not just those that want to fight!
Most conflicts are over resources, so the abundant opportunities found in the stars could help bring an end to the fighting here on Earth.
What if these troops decide that they no longer want to take orders, will they turn on us or is there an off switch that those “in charge” can flick. If there is a switch then we are into another set of ethical questions.
This is shaky ground at best, but I think it is something that will become prevalent. The future may just be a mirror of what was seen in Alita Battle angel.
They may not be creating the hulking cybernetic assassins of that comic book and movie but they are definitely starting down that path.
The first stage is the creation of devices that will improve senses. As is always the case this technology is being marketed as an aide to those with disabilities.   'Cyborg ears' have already been designed and built, they not only helped change the lives of hundreds of thousands of hearing impaired people But also helps change the way people can hear. If you were to choose you could have your hearing augmented.
The designers have now turned their attention to the human eye. Google recently released images of a device which can be worn like a contact lens and give the wearer bionic vision.
The eyes of the cyborg warrior will be able to see and create enlarged images clearly. This Improves vigilance and awareness of the surrounding situation a must for a soldier.  The Ears of the Cyborg help with communication and detection systems. Hearing be boosted to be so effective a whisper can become a shout.
These mechanical systems will be combined with genetics.
The techniques of optical genetics (Optogenetics), uses genetic engineering to allow light-sensitive molecules to control the activities within that cell Wall. This could give a person the ability to have natural night vision or see in different light spectrums.
The program will also improve on the bodies capabilities, the muscles of the cyborg warrior will be made stronger and quicker, first through the wearing of a bodysuit. An exo suite with enhanced strength and reactions.
This will kick off a new arms race, and we are seeing the first tit for tat developments of this new technology.
Russia has been busily building its own "Iron Man" armor for military use.
And as we mentioned the ironclad warrior of Marvel fame, something else that these new suits will have in common with the comic book hero is that they will enable the soldier to communication and share data directly to machines.
They will also have the ability through these upgrades that will allow direct brain to brain communication between humans and humans, how could this possibly go wrong?
Not only will these cyborgs be a formidable physical presence they will also be silent, communicating through a single neural grid, do we really want to unleash such formidable foes?
These Cyborg soldiers will also communicate directly with unmanned vehicles and directly control various automated weapons systems, this the developers say will make command and combat operations more efficient.
So we may not only be facing these advanced cyborgs we may also have to deal with their robot back up!!

Aside from military technology the above report also points out that Cyborg applications will also be widespread in civil society over the next 30 years.
It singles out, the use of cybernetics in health facilities, the economic value of cyborg technology in civil society and how it will continue to increase and be the driving force for the development of a new society all this originating with the military cyborgs.
They really do want a post human future!!
The reports is not all happiness and digital sunshine, it concludes with its concerns for the future and outlining how cyborg technology and creating "Human enhancement" is gaining in popularity among the general public.
This could result in an imbalance and social inequality, which in turn could then lead to legal, Security and ethical issues.
A final startling line in the report say that Robots 'will replace 20 million factory workers' by 2030
So maybe the biggest weapon they have to wipe out the non-cybernetic will be economics?
So what do you think of this cybernetic future, will you be willing to take an upgrade or will you stand against this technological evolution of the human species?
Let me know in the comments below.