Billy Meier's UFO images. The truth is out there

It’s an image that has become engrained in the minds of many, especially if you are a child of nineties
The iconic poster which sat prominently on the wall of X-files agent and lead protagonist Fox Mulder became a phenomenon selling millions of dollars’ worth of merchandise.
There is more of a story behind that famous poster than you might think, maybe the poster should have featured in its own episode.
The story behind the photograph and the man that took it, begins with the series of photographs that this one image is taken from and concludes with the Photo coming up for sale.
Let’s see who made this poster, took the iconic photograph, why it is so important, and what is the mysterious history behind the picture? 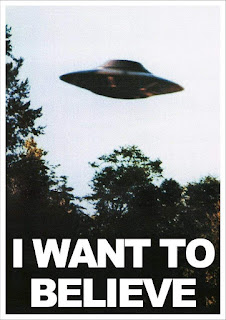 The "I want to believe" UFO poster that featured prominently in the office of FBI special agent Fox Mulder, was an image that would become pop culture gold.
How many of us had the same poster adorning our bedroom wall, or at least new of it through the show.
The X-files at its peak reached over 20 million people. It was a global success, not only introducing the world to David Duchovny as Mulder but also Gillian Anderson As Scully.
More than that the show did a spectacular job of sowing the seed of mystery in many people’s hearts.
Its episodes covered everything from the paranormal to cryptozoology, myth, legends, and most popularly extraterrestrials, UFOS, alien abduction, and a plan by secret ruling powers to enslave the planet.
The pair would work from a dusty basement of the FBI building. In this Basement Fox had made himself a little nest of the strange cases he had investigated and on the wall above his desk was the poster of flying disc with the bold words “I want to believe”
What many don’t know is that the image shown in the poster is from a series of pictures that show blurry metallic blobs hovering above the mountainous Swiss countryside.
The pictures have been the subject of much debate since they were released, many ufologists are highly skeptical about the images.
So let’s take a look at the history of the photographs and the man behind them.
Billy Meier (my/er) is a Swiss national who in the 1970s claimed he had been in contact with aliens from the Pleiades star cluster - and has the photographs to prove it.
"Billy" Eduard Albert Meier was born on February third, 1937 in the town of Bülach in the Zürcher Unterland, Switzerland.
The man, has over the years, been the source of many UFO photographs.
The collection he has amassed are used to support the claims he makes about being in contact with aliens from Pladies. He also has a collection of extraterrestrial metals in his possession, but more on those later.
His treasure trove of alien paraphernalia includes video, audio recordings, and more.
This all being collected when he interacts with a group he calls the Plejaren. These alien beings have the appearance of tall blonde humans and are better known as the Nordics. The alien humanoids originated on planet known as ERRA. This world is not so much found at a fixed point in our solar system but is instead from another Dimension.
A dimension That Meier says is just a second shifted away from our own dimension.
They made contact with the Swiss man back in 1942.
At the time Billy was just five years of age and claimed to be visited by an elderly extraterrestrial man named Sfath.
Sfath continually visited the boy until in 1953 when he was said to have passed away.
From 1953 to 1964, Meier was visited by an extraterrestrial woman called Asket, she kept visiting until one day the visit suddenly stopped.
Eleven years then passed before he would receive another alien visit.
The next visitation was by two being an alien woman going by the name Semjase and the claimed granddaughter of Sfath, Meier claims these two alien beings continue visiting him until today.

Some credit the man with being one of the most reliable sources for UFO information in decades. He has published multiple Books documenting his contact with the Nordic aliens.
Billy authored dozens of books and compiled a dossier of some 6000 reported contact events. Most of these are unavailable in English as Meier publishes in his native German language.
He has approached a number of topics I have talked about here on the channel. Most recently I talked about Extraterrestrials originating in binary star system.
Billy Meier covers this with his ideas of the Dark sun, this theory puts forward the idea that there is another sun in our solar system. This sun is hidden but is said to be one light year away from the star that we orbit.
This making our solar system a binary system and as I found out when researching my look at Binary Star systems, they are highly likely to produce life.
And while we are talking about hidden astronomical bodies, he also proposes that there was another planet in our solar system. This planet was called Malona, the inhabitants of the world destroyed themselves along with the planet the remnants of which we see today as the asteroid belt.
If we can lose a planet why not a whole other solar system?
Meier claims that there is another solar system just 5 light years away and that this group of worlds is populated by various types of humanoid beings.
The man has been a bit of a traveler himself, he claims that he has visited other worlds and galaxies along with another universe all in the company of his friends the Plejrens.
Rounding out his ideas or the information he says was given to him by The Nordics, is that the universe is around 46 trillion years old, not billions of years old, our scientists claim.
The stories of his travels can be found in his many published documents.

Meier accumulated his large collection of photographs over a number years. These pictures show everything from alleged spaceships that Billy names beamships to pictures of the Plejaren aliens.
Meier says he was given permission to photograph and even film these beamships so that he could produce some evidence for their extraterrestrial visitations to those who did not believe his story.
This is when we get to the popular X-files image.  It was part of a collection of photographs Meier allowed to be published in a 1979 book by former United States Air Force pilot Wendelle C Stevens.
This is when we come round to the collection of photos he has both published and kept private.
Some of the most important pictures that support Meier's claims come from this large collection of photographs. This compilation of pictures include images of metallic discs floating above the Swiss countryside, the 1975 docking of Apollo–Soyuz, pictures of celestial objects from a non-Earthly vantage point, pictures of apparent extraterrestrials, prehistoric Earthly scenes, and there are even images that have been said to be captured from a future point in time.
They show disturbing scenes of a planet that has been devastated in a post-apocalyptic future.
These photographs, films, sound recordings and Meier himself were subjected to an investigation over five year period. Wendelle C. Stevens and his American team of analytic experts, which I mentioned published the evidence, Carried out the investigation which in turn became the subject of Larry Savadove's 1982 documentary film Contact.
Many techniques were used in an attempt to debunk Meier’s evidence, they used photogrammetric and computer analysis of photographs, tonal and dynamic analysis of recorded sounds, recreation of models, and extensive polygraph tests on Meier and his acquaintances.
All of which could not prove of disapprove the evidence that was provided by the Swiss UFO contactee.
This bringing us back to the image that would later appear in publicity material for US science-fiction Programme The X-Files.
The poster came from the ideas of the show’s creator Chris Carter he said in an interview “it came from me saying, ‘Let’s get a picture of a spaceship and put–Ed Ruscha-like—“I want to believe.”
And with that the Iconic poster was born.
It was not all smooth sailing though as Carter had no clearance to use the image and had infringed copyright law.
After the lawsuit the original poster was altered to feature a different unidentified flying object.
These photographs are no up for auction at Sotheby's in the US, they are part of a sale dedicated to space photography.
This could be your chance to grab some UFO history that is if you have a spare $6,000 to $9,000. The estimated auction price for the pictures.
Some UFO researchers such as the late Stanton T. Friedman and Jacques Vallée publicly dismiss the Meier case, while others believe the Meier to be the most thoroughly researched and validated UFO case in modern history.
What do you think of the pictures and the story behind them, is this a true story of man contacted by an alien race trying to prove his story to the world, or is a publicity stunt in bid to gain fame and fortune?
Let me know what you think in the comments below.
I would like to give a bit of a shout out to a friend of the channel Ryan Tremblay he will now be working with the good folks over at “the venomous fringe” hop on over to their channel and let them know that if sent you.
As always if you like what I do here on the channel hit that like button and share you can catch the latest by searching we are if.
If you would like to support the channel there are links in the description, maybe pick up some merch for a Christmas present?
I hope you having a fun and festive time on this run up to Christmas, merry Christmas and thanks for watching
I’ll see you…… next time.

Email ThisBlogThis!Share to TwitterShare to FacebookShare to Pinterest
Labels: ##Extraterrestrials #ufologist #weareif, Billy Meier's UFO images. The truth is out there