You guys know how much of a soft spot I have for river and lake monsters, there is just something about the idea that some kind of cryptid a creature could be hidden just below the water’s surface ‘that, to me’ makes them a little more plausible.
While I was researching the subject I stumbled upon an animal from over 300 million years ago that had a strange body shape, a body that reminded me of a famous cryptid that was known as Trunko.
In turn Trunko being similar to an animal that is found in Hindu mythology. 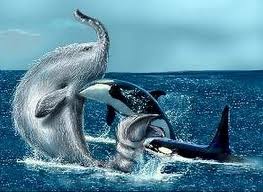 So let’s begin by telling the story of Trunko.
Going back to the year 1924 in the month of October an article popped up in the Daily Mail an English newspaper. This article detailed the sighting of a fish like polar bear which was seen fighting a pair of killer whales. Those that spotted the strange creature said the 3 animals fought for over 3 hours.
During the pitched battle it was reported that Trunko could raise up out of the water to a height of 20 feet.
The witnesses said that the mystery creatures used a long appendage to fight the whales, they speculated that it could be a tale but as the name of the creature indicates others think that is was a trunk.
Whatever the beast was and whatever it used to fight the sea mammals it lost and the body washed ashore nearly fortnight later.
This would become a wasted opportunity as the carcass was not examined by scientist, cryptozoologist Karl Shuker did get to see the remains which he went onto to describe as follows;
The carcass had a covering of white fur said to be 8 inches long, the aforementioned trunk along with a lobster-like tail measuring 10 ft. The dimensions of the beast were 47 feet in length just over 10 feet wide, it had a height of 5 feet.
The distinct trunk was attached to the body with no discernable head.
This unusual animal is unlike any animal that was known to science of the time but was a lot like a Hindu mythological creature. Some cryptozoologists suspect the legend of the Makara may be based in fact, and associate it with the Trunko sighting on South Africa's Indian Ocean.
This animal is known as the Makara and is often featured in Hindu paintings as the vehicle or “Vahana” that is ridden by the Ganga the river goddess of the Ganges and the sea deity Narmada.
This creature is depicted in Hindu and Buddhist iconography as a water dwelling beast that looks like an aquatic elephant, could this be Trunko or a maybe a similar species minus the fur due to it being native to a warmer climate?
Or maybe it is something else?
There is an animal from prehistory that closely matches the description but is much, much smaller. It does however have the characteristic appearance of Trunko and the Makara.
This is a creature from 307 million years ago discovered fossilized in rock at an Illinois coal-mining pit in 1958, named Tullimonstrum gregarium, or as it has more commonly become known “ the Tully Monster” 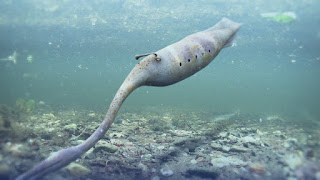 This creature is thought to have been some sort of free swimming sea- slug, it is one of the strangest animals to have ever shown up in the fossil record.
It had a torpedo shaped body and like Trunk a long jointed snout which looked trunk and was finished with a claw that was edged with sharp teeth. It had bizarre eyes that were located at the end of stick like structures that grew from the sides of the body.
If we compare the Tully monster to the carcass of Trunko we have something that looks fairly alike, we could assume that if Trunko had eyes like the Tully Monster they would be quick to rot away when the animal died. Eyes often being the first body part to be scavenged.
Both animals have the distinctive trunk and with the Tully monster we can clearly tell that it was used in the same fashion as an elephant, used like an arm. An arm that would be used to defend itself, say if were being attacked.
This is what was reported by witnesses of Trunkos’ battle with the Orcas.
We don’t however find a lobster like on the Tully Monster so that maybe a feature that is unique to Trunko!
Also The Tully Monster only measured around 14 inches in length.
Much smaller than Trunko, but could the former be a similar giant variant of the species?
Proving such a creature could have its difficulties, the finding of fossils of soft body creatures and even cartilage animals like sharks is difficult. It is a shame that no one had the foresight to collect samples from the corpse of Trunko, if they had we may have some answers today.
The story of the Tully Monster also takes a strange turn at this point, scientist have not been able to agree on the classification of the animal they have been going back and forth on whether it was a vertebrate or an invertebrate.
Arguments have raged for decades since the first fossil was found in the 50s, evidence swinging between the two camps. In 2016 researchers argued that the animal should be grouped with vertebrates because its eyes contain pigment granules called melanosomes, which are arranged by shape and size in the same way as those in vertebrate eyes.
However the eyes of some invertebrates such as octopus and squid also contain melanosomes partitioned by shape and size in a similar way to Tully’s eyes, and that these can also be preserved in fossils.
In the latest round of tests to prove who is correct researchers used a Particle Accelerator to look into the chemical makeup of the fossil and then compare it to animals living today.
These scientist explained that melanosomes from the eyes of modern vertebrates have a higher ratio of zinc to copper than the modern invertebrates and to their surprise, they found the same pattern could be seen in fossilized vertebrates and invertebrates.

they then analyzed the chemistry of Tully’s eyes and the ratio of zinc to copper was more similar to that of invertebrates than vertebrates. This suggests the animal may not have been a vertebrate, contradicting previous efforts to classify it.
Tully’s eyes contained a different type of copper to that found in vertebrate eyes. But the copper also wasn’t identical to that in the invertebrates that were studied.
So while this work adds weight to the idea that Tully is not a vertebrate, it doesn’t clearly identify it as an invertebrate either.
This creature does not fit with what is known and although it may not be of the same massive proportions of Trunko it does carry with it the idea that there are many animals out there that once existed or possible still do exist that do not fit with current scientific theories.
These are the animals that we cryptid fans point to as an explanation to the stories and sightings from all over the planet of strange, sometimes mythical mystery beasts.
I am reminded of Shakespeare’s Hamlet.
In which the lead character suggests that human knowledge is limited saying: “There are more things in heaven and Earth, Horatio, than are dreamt of in your philosophy”
So what do you think, what was Trunko, was he a creature found in Hindu mythology or could it have been a giant Tully Monster?
Let me know what you think in the comments below