The Hodag a cryptid creature

So I have cryptid for you.
A strange creature that some say is nothing more than story while others claim it to be real, a story with a touch of the paranormal and strangely a dash of the political.
So what mysterious animal am I referring to?
It could only be Wisconsin’s favorite cryptid creature
The Hodag 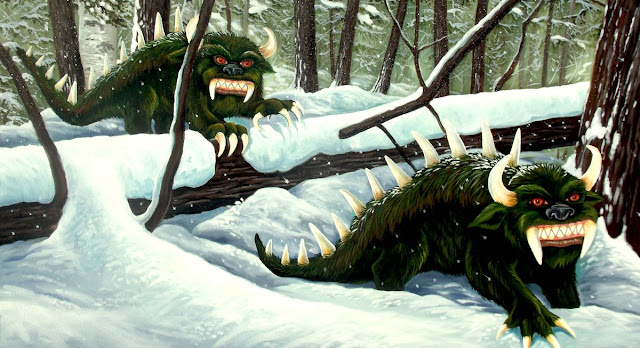 For those whom have never heard of this cryptid let me explain what a Hodag is.
It could be described as one of the meanest, bizarre, and most terrifying monsters to stalk the woods and forest of any US state.
The Hodag is said to have made its first appearance near this Northwoods Wisconsin city in 1896.  A picture snapped by local man Gene Shepard, Rhinelander pioneer and timber cruiser, as the cryptid animal leapt at them from  behind a white pine log after the men accidently stumbled upon the animal.
So what did the man see?
The description of the Hodag is a weird mix of animal it has the head of a frog, the facial features of a pachyderm, spikes run down its back giving it a dinosaur like quality, its limb is finished with huge claws, and a long whip like tail tipped with yet more spikes.
It possesses terrifying green eyes and large bull like horns upon its head.
The Hodag is thick with a muscular body of around 7 feet long, it stands at 30 inches in height, and tips the scales at about 200 pounds. It is said any animal or person foolish enough to get to close to the beast will end up as a meal, However, white bulldogs are its preferred food.
There have been claims that the Hodag can also breathe fire, but if you’re in the Wisconsin woods you may get warning that you about to come across the cryptid as it is said that the animal emits a pungent smell, described as a mixture of buzzards and skunks.
So where does this creature come from?
There are two stories the oldest and possible original are the tales of the Mishipeshu is "The Great Lynx, also known as the Water Panther (or Underwater Panther) this animal was part of the belief systems of the Ojibwe, Algonquin, Ottawa, Menominee, Shawnee, Cree native American tribes.
Thought to be a mythological creature somewhere in between a dragon and cougar, it was said to be a dangerous beast that inhabits deep water and is the cause men and women to drown.
The legends of some tribes describe Water Panthers as being the size of an ordinary lynx or mountain lion, while in others, say that the beast is a giant.
Underwater Panthers are said to have the power to cause storms, and can stir bodies of water into dangerous currents and riptides. Because their name means "Great Lynx" or "Big Lynx", they are often depicted as being very large and strong with a description that is very close to that of the Hodag.
Water Panthers are described as furry with either horns or deer antlers or a sharp saw-toothed back.
Images of this animal have been found on rocks in the area and over most of the range for these tribes one the best being a Pictographs can be found at Agawa Rock in Lake Superior Provincial Park, Ontario.
The second theory of how this animal came to be is a little stranger.
According to the local legend, the Hodag was originally an ox that worked with the local lumberjacks hauling large logs from the forest. When this ox died it is claimed that it was reincarnated as the vicious cryptid Hodag.
The twisted appearance of the reincarnated beast being a result of the ox’s anger at being worked like a slave until its death. After the transformation it began disrupting the work of the local lumberjacks by killing their dogs and oxen and other working sometimes, it took the lives of the lumberjacks themselves.
It is said that over the years More oxen were transformed in to Hodag , and now the forests of Rhinelander are crawling with these restless spirits of angry working animals.
These creatures can often been heard crying out, a echoing haunting cry of creatures that are aware of the beasts they have become.
So besides ancient rock paintings what other proof of this creature exists?
Going to the photograph snapped by the woodsman at the start of the story, in 1893, a Rhinelander paper distributed an electrifying story, asserting that the Hodag had been spotted close by.
A land surveyor named Eugene Shepard assembled a posse of men to track down the dangerous animal. They gathered all they would need dogs, rifles, and for some reason squirt weapons loaded up with poisoned water.
The posse successfully tracked and found the Hodag killing the beast using dynamite and then snapping pics with charred remains.
The photos aren't clear, yet they were sufficient enough to kick off a cryptid-chasing frenzy in the area. Numerous people started running around the backwoods in the hopes that they would get to a Hodag.
None of them did until once again Eugene Sheperd successfully captured one in 1996.
The animal was taken alive.
Shepard told a fantastical story that he and some bear wrestlers had tracked cornered and then wrestled the beast before they were able to knock the animal out with a rag soaked in chloroform.
The man obviously looking to profit from his bravery displayed the Wisconsin cryptid.
The monster was shown at the first Oneida County fair where thousands of people came to view the marvel in a dark tent.
Later scientists from Washington D.C requested to view the specimen, it was at this point that Shepard admitted is hoax telling the Washington men that he had made a sculpture from wood and used wires to make it move.
And for most that is the end of the story the Hodag is fake!
For the people of the Rhinelander the Hodag is more than just a crazy story, it is somewhat of a hero.
The people were struggling as the lumber business in the area took a down turn they need another source of revenue, something that would get people talking and visiting the agricultural community.
The Hodag did this, Decades after that fateful autumn of 1896, Eugene Shepard explained why he captured the Hodag: 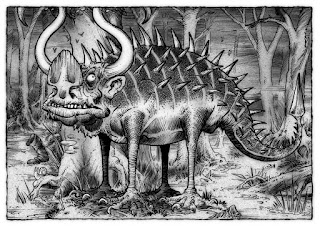 By no means is all the progress to be credited to the Hodag, but the Hodag did his bit! Not only hundreds but thousands of people came to view the Hodag...and not one of them went away without having learned a little more about northern Wisconsin, and it is safe to guess that each one of those thousands told others what they had seen and heard. In this way the beauties, opportunities, and resources of northern Wisconsin spread, and many who came out of curiosity only have come to make their home with us. Long Live the Hodag!
This is a sentiment that lives onto today.
And this is when politics enters the story, in 2016, locals began a campaign to get the creature elected President. The cryptid never made an in-person appearance during the unsuccessful campaign, but its campaign managers publicized the run with promises to build a better downtown area in Rhinelander and to “make vacations great again.”

So was the Hodag nothing more than a clever piece of marketing for a place looking to put itself on the tourist map or is it a creature of legend known to many Native American tribes, if it is the later then could it be a real animal?
Let me know what you think in the comments below
One more video before Halloween and the closing of the competition to win a disclosure make sure you check out the competition video while you still have time, and as always
If you like what I do her on the channel hit that red button like and share
You can catch the latest by searching we are if
Thanks so much for watching
I’ll see you next time