Extraterrestrial implants or alien biological tracking devices are terms utilized in the field of ufology to depict a physical item placed in someone's body after they experienced a close encounter of the fourth kind.
Close Encounters of the Fourth Kind being
A UFO event in which a human is abducted by a UFO or its occupants. This type was not included in Hynek's original close encounters scale.
Hynek's associate Jacques Vallee argued in the Journal of Scientific Exploration that the "Fourth Kind" should refer to "cases when witnesses experienced a transformation of their sense of reality", this would include non-abduction cases where absurd, hallucinatory or dreamlike events are associated with UFO encounters.
In other words occurrences in the mind, and the reports of these devices say that they have abilities such as telepresence to mind control, this along with biotelemetry (the latter akin to humans tagging wild animals for study).
"Alien implants" have seen very little in the way of attention from mainstream scientists.
But could they be a smoking gun, hard evidence of alien- human interactions?
Let’s take a look


Implants, more specifically alien implants have been collected and documented.
Radiographic, surgical, photographic, and analytic evidence indicates extraterrestrials are implanting devices in human beings during abductions.
Since 1994 implants have increasingly been surgically recovered these objects have become remarkably diverse: some look like a shards of glass, others a triangular pieces of metal, even a carbon fiber implant has been found.
None of these reclaimed alleged alien artifacts were located in the brains or nasal cavities of abductees, instead they were recovered from the abductee’s extremities.
Toes, hands, shins, and the external part of the ears, are often where these things are discovered mostly after a person has found a strange mark or a scar, but not always.
Some left no sign of their insertion into a victim’s body.
It is said that extraterrestrials tag people with implants just as we do with wild life and farm animals, these alien tags are little different to those that we use in animals being that they are placed internally usually with a protected sheath so they are not rejected by the bodies of the unfortunate individual selected by the cosmic visitors.
Many believe that the implants are used to track an abductee’s DNA, the abductee, and possibly modify that abductee’s body.
These implants are often small and round with most made of a range of metals but as more of these anomalous objects are found it is discovered that they can come in many different shapes other than round, such as triangular, spiral, and long thin strands as fine as wires.
As I mentioned these foreign bodies are often protected by a sheath, a strong covering of living tissue comprised of protein and keratin, the same material as hair and fingernails.
This covering is so strong and tough that surgeons cannot cut it with a hardened steel scalpel, this when the implants is in the body. It has been said that there is nothing on earth made by man that can match the strength of this simple outer covering.
Again reaffirming that these objects have originated outside of planet.
What makes this casing so hard to cut is that all the atoms used in its construction are perfectly aligned. The atoms lie in one single direction, providing a level of strength not yet achievable by human technology.
However, once an implant has been removed from an abductee’s body, it is then possible to slice through this tough outer covering, possibly because the aligned atoms and the surrounding tissue are no longer being charged or powered by the abductee's bodily electrical field.
These implants are slowly being noticed by the scientific community with researchers outside of the field of ufology agreeing that they could be tangible evidence of real alien abductions and contact.
There have been thousands, upon thousands of abduction cases, most provide little in the way of physical evidence, the recalling and retelling of what happened to an abductee being all we have to go on. 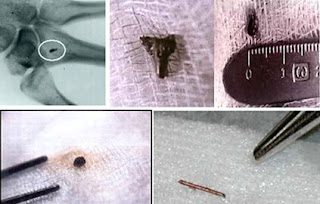 These implants being recovered from people who have had strange experiences being physical evidence which can make cases stronger supporting their claims of alien visitors.
So who are these people turning to for help?
The first man to take the recovery of alien implants mainstream was Dr. Roger Leir.
Dr. Leir surgically removed and analyzed implants from the bodies of serial abductees in southern California. Dr. Leir was a Podiatric Surgeon, who was in private practice in Ventura County, California, for nearly 50 years.
He held academic degrees in Medicine, a Bachelor of Science, and Associate in Arts and was a board certified surgeon.
He documented his findings and experiences in his book “The Aliens and the Scalpel”
In an exert from the book Dr. Leir writes
“It seems these things were somehow designed to be bio-compatible with the abductee and ‘wired in’ to the nervous system. Other interesting characteristics included:
All objects were recovered from the left side of the body
All the ‘exotic’ specimens (7 of the 8) emitted a powerful electro-magnetic field easily detectable with a gauss meter
When removed from the human body, all 7 ‘exotic’ specimens bizarrely and inexplicably fluoresced under UV black light
During laboratory analysis, the objects were found to be complex and contained a diversity of elements not normally found together in natural objects.
Xeropthalmia (night blindness) was common to 50% of the male patients and 90% of the female; in the general population, the percentage is in single digits (of course this might be just a bizarre coincidence)
Sadly the Doctor passed away in March of 2014.
So what about today is his work being continued and what is being found?
It is but as of yet no one has taken the ball and ran with it.
As more and more people voluntarily except man-made implants it would seem that it is a field of medicine that should begin to develop experts, medical professionals whom specialize in the insertion and removal of technological implanted devices.
Most of the implantees described noteworthy mental, physical or health related changes following their implant surgeries. Reports of continuations in some type of alien abduction activity. Some who have had the “biological” type implants removed, experienced strikingly similar post-surgical changes, involving shooting pains and reddening of the incision scar for a short period of time.
Symptoms a medical expert should be interested in.
The important thing to consider here, is the whole clinical picture. Over reliance on the physical test results of the implants alone are not substantial enough to solve the implant mystery – let alone the question of the alien presence.
If not, then what is? 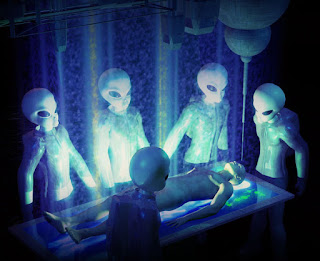 The lives and experiences of the abductees themselves, tell us that we need to stop and listen.
Should their experiences with non-human intelligence be taken seriously?
Many still remain skeptical about these implants and the idea that they are evidence of alien human interaction, they say that it is a simple fact people trip, fall, step on things, or work industrial jobs or have hobbies that deliver splinters, and nearly all of us have debris of some kind embedded in our skin somewhere on our bodies.
Combine this with a weird dream, and a person awakes maybe a little spooked or confused, they run their hands across their arms or legs and feel a bump an association is made between this bump and the strange dream.
Slowly the recalling of this dreams morphs into something that resembles an alien abduction, and then this lump becomes a possible alien implant.
Depending on the path they then choose this lump will be removed by a doctor and explained as piece of gravel, a metal sliver or wooden splinter. A regular piece of everyday material that coincidently was found when waking from a dream, or if they seek out an ufologist then it becomes a piece of embedded alien technology that is monitoring the person and that dream is a surfacing repressed memory of alien abduction.
So which path would you take?
Say you have found a strange mark of a mysterious scar how do you know if it’s an implant and possibly an indication that you have been abducted?
Most people that have alien implants don't know that they have them and most don't even remember coming in contact with a UFO or aliens. Some common symptoms of being abducted and having an implant surgically placed inside you can include:

Have you experienced any of these symptoms, if you have maybe you should give the Doctor a call.
You maybe being tracked monitored or altered by beings from another planet!
Do you have an implant, do you think these objects are extraterrestrial in origin or just splinters of materials from this planet?
Let me know your thoughts in the comments below
The last few days for the competition are upon us make sure you get your answers in by Halloween, if you would like to support me and the channel maybe pick yourself up a shirt or Just drop me a buck on PayPal all links can be found in the video description.
If you like what I do here on the channel hit that red button like and share
You can catch the latest by searching we are if
Thanks so much for watching I’ll see you next time.