After a wonderfully refreshing break in Vietnam, thanks for all the messages, the first video has to be a Vietnamese tribute.
Vietnam has a rich history when most people think of the the country they think about the War but the Vietnamese were battling many other nations before the Americans the Chinese, the Khmers, the Chams and the Mongols all had their conflicts with the South East Asian nation.
I don’t want to look at that here it’s not what I cover on the channel when I read the history of the country I went directly to its cryptid creatures
So let’s take a look.

Vietnam is a melting pot of many different cultures and this has left a strange mix of mythical creatures from Asian beliefs mixed with some western influences.
I wanted to find the animals of legend that were less mythical and could be more real-world cryptid specimens.
This is when I discovered a colossal maritime centipede which is said to live in the south-east Vietnamese Ocean. Its body is made of sections of hard plates and it utilizes knife blades to swim.
This giant arthropod is known as the Con Rit .
The Con Rit was first investigated by western science in the The 1920s when Dr. A. Krempf, executive of the Oceanographic and Fisheries Service of Indo China, led exploration in search of the beast.
Dr. Kremph discovered and interviewed an eyewitness who made the claim that he had touched a beached Con Rit back in 1833. The witness said that this first carcass found by Tran Van Con in 1833, was that of a creature he claimed to be about 60 feet in length and 3 feet in width.
Another report comes from HMS Narcissus which was in 1899, travelling near Cape Falcon, Algeria, this when several of the seamen aboard the vessel spotted what they described as a sea monster.
They gave the animal a size of about 135 feet long and said that the sea creature had a large number of fins running along the sides of its body, which they said it was used to propel itself through the water at a pace that had enough speed to keep up with the ship.
They watched this animal for a total of 30 amazing minutes before it dived back under the water and disappeared into the depths. 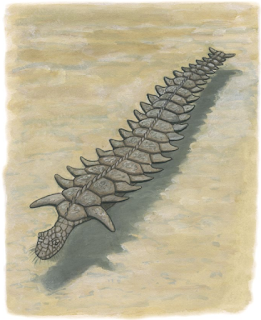