Dinosaurs are famous for a few things the first going extinct the second their huge sizes and thirdly their small brains.
Dinosaur intelligence has been debated by paleontologists for year. Non-avian or non-bird like dinosaurs were once thought of as being unintelligent animals, this has been rethought with movies like Jurassic Park showing them as being far more intelligent than they have historically portrayed.
All we know about Dinosaurs comes from the fossilized remains that have been found and then best guesses on their behavior are made.
These can be obvious large sharp teeth carnivore, bipedal thin build fast runner, but often there are mistakes just look at the issue with dinosaurs and feathers.
So what if a fossil was found that showed instead of a small brain there was once a species of dino that had a large brain?
Let’s take a look


So dinosaurs,     Dinosaur comes from the Greek words δεινός (deinos, meaning “terrible,” “potent,” or “fearfully great”) and σαῦρος(sauros, meaning “lizard” or “reptile”).
Went extinct some 66 million years ago the most well-known theories for the death of the dinosaurs
Being a meteor the size of a mountain slamming into Earth.
This event ending a 230 million year reign of the planet, in comparison modern humans have been around since the Middle Paleolithic, about 300-200,000 years ago. In this time we have gone from sharpened rocks and wearing animal skins to space exploration and quantum computing.
So why do we not see the evolution of the same intelligence in dinosaurs after all they were around for a lot longer? 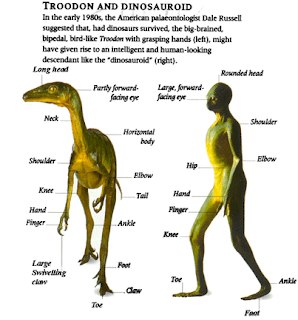 Back 1982. Paleontologist and curator of vertebrate fossils, Dale Russell, published his thought experiment based on the evolutionary trend of larger brain sizes and the increasing upright posture of dinosaurs found in the fossil record.
What he came up with looked strikingly similar to species that is said to be from the stars.
The scientist put together a scenario in which a single species of dinosaur evolved and even survived the mass extinction event that killed all of its ilk.
This new species of dinosaur would be known as Troodon.

This reptile was giving the similar evolutionary arc as arc given to humanity by Darwin the main difference being the starting point. For mankind it was an ape for Troodon is was a smaller dinosaur.
Applying the evolutionary principles of adaptation the newly created Dinosaur resembled a human standing four to five feet height, and weighing about 90 pounds, with a fairly advanced brain.
Dale Russel named it a dinosauroid, an upright, standing, semi-humanoid, semi-reptilian entity, what we might call a reptoid.
This is when those that follow alien theory were shocked as standing before them was a species that has said to long been on this planet living in secret and manipulating history, they were looking at a reptilian!
Extraterrestrial reptilian humanoids are said to be behind many conspiracies this as they carry on with an objective to enslave the human race. Those that believe in the reptilian conspiracy say that the majority of people in power today and throughout history are and were Blood-drinking, flesh-eating, shape-shifting reptiles, intelligent humanoid reptiles just like Russel created!
It is believed by some that the Annunaki gods of Babylonian lore are in fact a race of reptilian aliens who hail from the constellation Draco. And not only did they walk the earth as gods in the days of yore, but they still walk among us today.
There have been humanoid or maybe we should be using dinosauroid beings documented through the majority of recorded human history, "Lizard man" if you will are seen in many cultures.
The Ancient Egyptian deity Sobek, who had the head of a crocodile.
The Nāga are semi-divine creatures which are half-human and half-serpent of Asian origin and today reported sightings of cryptids like the frogman and Lizard Man of Scape Ore.
I myself have looked into a few creatures and I will post the links above.
This has to make you think that the maybe the idea of these lizard people coming from another planet is a lie, maybe they have been here since before humanity ventured down from the trees.
Could they even have something to do with our evolution and as the older intelligent species on this planet could that provide a reason as to why they feel they should be our rulers?
It can be speculated that not all of the dinosaurs went extinct? 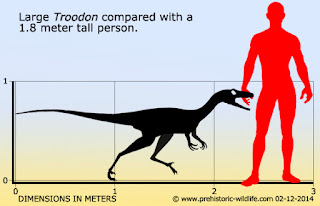 Like Russel theorized a survivor of the global extinction, developed through natural selection, becoming more intelligent, and taking on a humanoid or dinosauroid form?
Should we believe that the reptilians are extraterrestrials or have they been walking the planet since the Mesozoic?
Let me know what you think in the comments below
Just a few more day until I go through all the competition answer so if you haven’t entered yet go check out the competition video.
Good luck