I really enjoy going back through some of the older stories regarding UFO and extraterrestrial contact and with all of the recent talk of Mars from Elon Musk. I decided to take a look at the history of the red planet and the multitude of stories of life existing on Mars.
This is when I came upon the claims of a Randy Cramer.
This man’s story has it all genetic super soldiers’, alien battles, and a government conspiracy of silence on the secret missions to Mars.
So is there any truth to the tale, what are some of the claims this former soldier makes?

Randy Cramer was born in 1970 and up until the age of three his life was normal but on his third birthday he was taken in by a government project named “mannequin.” This was a highly secret series of experiments that were designed to create super soldiers. The military were looking to create humans that would be faster, stronger, and have more endurance than the men and women they normally recruited. Cramer was selected as subject and for the next fourteen years would be trained along with three hundred other selected individuals, he claims that he was part of another project named “Moonshadow” more on that later.
Cramer would spend most of his life in various secret military projects that would culminate with him gaining the rank of captain.
“Captain” Randy Cramer says that he has been given permission to disclosure the information that he has kept secret for all of these years. During the 17 years he served he spent most of that time ‘off world ‘as he puts it.  The main location for the secret special section of the marine core was Mars. Cramer goes onto to point that it is a criminal offence to impersonate an officer so his public comments on the military space program are true if they weren’t he would have been imprisoned.
If this story is true we should start at the beginning and project ‘Moonshadow’ . the captain outlines how the Selection process for the secret program began before birth.
The families that would provide the babies for the ‘Moonshadow’ were preselected by a team of expert genetic scientist. They chose those that already had a genetic advantages over the majority of the population and with some tweaking they could they could use as the base for their super soldiers.
Cramer said jokingly “sometimes say that I was a Marine since I was a baby, but that is actually legally true, when you're fighting you don't care... you feel pretty aggressive and you're just happy to be there stomping and killing things”.
So who would these soldiers be fighting and where would they be fighting?
The captain goes on to tell of a race of reptoid and insectoid extraterrestrials living on Mars. The reptoid race maybe familiar to those of you that follow alien theory as Cramer says these are the Draconians the race said to be living among us here on earth.
They are the basis of the reptilian conspiracy championed by the likes of David Icke.
Cramer shared his stories of fighting in the Draconian invasion also speaking on his time as a piloting of an Airwing. An Airwing being some kind of space fighter maybe something like X wing?
These fighter operated fROm an intergalactic air carrier named the EDF SS Nautilus.
Cramer did not survive this battle, wait what!!!!
So how is he telling this story?
He says that they have the ability to clone people and when they are killed the military can transfer a soul into a new body via what he calls quantum fluid, they then return to service until killed and the cycle begins again.
Those that are skeptical pointed out to Cramer that anyone with half the abilities he mentioned would also be capable of implanting false memories, could it be the case That Captain Cramer was in fact implanted with false memories?
Cramer says “No”
Thousands of hours of therapy have shown it was an authentic experience. "I feel really confident that we're talking about solid and real memories,"
One of these memories is of a Martian base named Forward Station Zebra. Seventeen of Captain Cramer’s twenty-year tour of duty were spent in this underground facility. Cramer described the subterranean base as the forward most and northernmost complex found on Mars.
As a space marine, it was his duty to fight in the regular skirmishes and conflicts that would break out with the indigenous alien races. There were occasions when the soldiers had downtime, when they did Cramer would venture south. Although the Martian atmosphere was sufficient for habitation, a powered suit made respiration easier on the human cardiovascular system. Cramer insisted that his suit wasn’t necessarily required at the Martian equatorial regions. He commented that it was more like mountain air back on Earth. There were also occasions that snow fell in this area but wasn’t like the snow that he was familiar with. The war continued for decades and eventually Cramer would return to Earth. 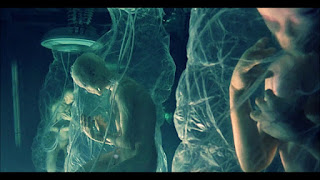 Luckily for him he cloned again and put into a younger body he saw his final DAYS in THE service out, by serving as part of the (EDF) the Earth Defense Force, he was still based off world working from a hidden base on the dark side of the moon.
Since going public with these reports, Cramer has gone on record that he is of the opinion that it isn’t just Mars and the Moon that have been claimed, but deeper into the Solar System and even beyond.
This is when we may ask why he is being allowed to tell such a fantastical story? (If true)
Randy Cramer says that it is all part of a government and military program of disclosure.
It has Been Authorized by Top Military Officers.
Cramer claims that he was given the green light on speaking publicly about his experiences. As part of the “USMC ss” (United States Marine Corps – Special Service), he states that his commander, Brigadier-General Julian Smythe, has given him full permission to share his story. Cramer claims his supervisor actually wanted him to speak publicly about it. If Cramer is authentic and telling the truth, this means the official military and governmental endorsement to release a massive amount of sensitive and classified information, all of which would normally be kept completely hidden from the public under that hackneyed rubric “national security”. It means Government-sanctioned Mars disclosure.
What could be the Implications of this Mars Disclosure?
Governments around the world, and the US Government in particular, are lying to people on a scale so massive and colossal it defies imagination.
People are scurrying around worrying about menial and banal affairs, falling for fear propaganda like Ebola and ISIS, but meanwhile, an elite-controlled section humanity with highly advanced technology is already actively colonizing space. Rich Dolan calls this the breakaway civilization. Cramer states that he believes that there are colonies not just on the Moon and Mars, but also all over the Solar System and beyond.
What do you think of this amazing story, is it just the retelling of a mix of science fiction tales or is it a timeline of real events?
Let me know what you think in the comments below.