I have been on a hunt this week, a hunt for some lesser known cryptids but I gave myself some parameters. The first was, as I said, it had to be lesser known creature the next it needed to be plausible and have a parallel animal which lives today or once existed in the past.
So I found two cryptid creatures that aren’t as popular as the big hitters like the chupacabra, yeti or Mothman.
Let’s explore these mysterious beasts and have some fun speculating on what they may be and if they even exist
So it’s time for my top two little known cryptids. 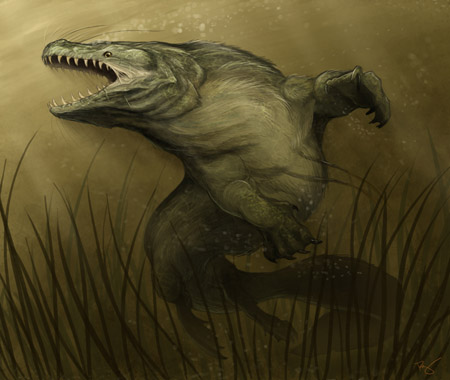 The first cryptid I have for you is found in the lakes and rivers of the emerald isle, a creature of Irish folklore and legend that is very plausible.
It has no fantastical abilities its appearance is reasonably normal and there are animals in other parts of the world that appear to be almost identical to some of the descriptions given for the cryptid.
So what am I talking about?
The Dobhar-chu. (darabhoo in Gaelic)
So what is the The Dobhar-Chú (darabhoo) it could be said that this water dwelling cryptid is the Kaiju of otter species measuring seven foot or more.
Known as the “King of the Lakes”. The Dobhar-Chú (darabhoo)  is a vicious beast said to kill both people and animals finishing off its victims by drinking blood.
The animal is often described as looking like both a dog and an otter, it’s depicted in many pictures and stories  as being a half dog and half fish.
Hence the name Dobhar-chú which can be translated to “water hound”.
The creature has a long history in Ireland with many sightings one of the more recent witness reports comes from 2003 when an Irish artist Sean Corcoran and his wife said that they witnessed a Dobhar-chú (darabhoo) on Omey Island in Connemara, County Galway.
His description of the large creature is that it was big and black, made a haunting screech, could swim extremely fast, and had orange flippers like feet.
These cryptids are often seen in pairs and in many of the old tales when someone has a confrontation with one of these water hounds they often have to face its partner as well.
This leads us into actual animal behavior which could support the existence of the creature.
Otters are generally monogamous and they may even mate for life.
The otter is also a vicious predator, they may look furry and cute but they are ferocious and cunning hunters. Otters are members of the mustilid, or weasel family which includes skunks, wolverines and the honey badger, an animal considered to be one of the toughest creatures on Earth.  There are 12 species of otters, (13 until the Japanese river otter was declared extinct in only 2012), found all over the world except Australia and Antarctica.
The otter used to be a common place in Britain but was sadly hunted to the brink of extinction, hunting was banned in 1978 and since then the creatures are slowly making a comeback.
These Otters cannot explain the large of size of the The Dobhar-chu (darabhoo) but there is one species that could the giant river otter.
Although a little smaller than our cryptids, if we allow a little wriggle room for the gilding of the stories, they do come close at lengths close to 6 feet.
The problem with this species is that they are found deep in the forest of Brazil, Venezuela AND Peru
so how could they have arrived in Ireland.
We could speculate that like the big cats seen they may well be escaped pets but this I feel does not explain the earliest of sightings, there has been a number of supersized otter species found all over the world A giant otter roamed southwestern China six million years ago fossils show an animal that weighed more than 50kg and was the size of a wolf.
Sounds like a match but once again we have a problem with the location.
The fossil record for otters is extremely poor so maybe a species of giant otter has been just about holding on and as the animals are so private been hiding right under our noses?
Maybe a giant otter species in Europe could explain a few of the other lake monster stories, until more evidence is found we can but speculate.
The next cryptid is a little stranger with an appearance that will need to be picked apart for the creature to make more sense.
The Grootslang, or “great snake,” is the legendary monster said to live deep in the caverns of the Richtersveld, a mountainous desert region of northwestern South Africa. 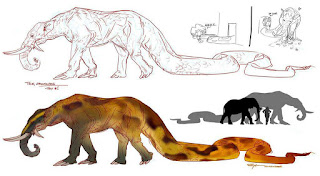 In local mythology, Grootslangs are said to be primordial creatures with an unusual appearance, they are comprised of the head and front body including legs of an elephant with the rear and tail of the beast being that of an enormous serpent.
The legend tells that When the Earth was created, the Grootslangs were all apparently destroyed, but according to legend, some survived and retreated to the deepest caves of the Northern Cape Province.
This story reminds me of the tales of the Naga found in Indian and Asian folklore, could there be a connection?
Tales of enormous tusked snakes have probably inspired by real-life sightings of enormous pythons that live the same area or maybe a larger creature.
Myths of giant’s snakes have been told globally from the winged serpent Quetzalcoatl of Aztec legend to
Norse mythology, and Jörmungandr.
Snakes have long been entwined with human history are in built fear of the serpents has shaped the image of a snake but are there any giants that could match up to the legendary Grootslangs?
Currently the biggest snakes in the world are the Anaconda found in tropical South America Weighing in at 550 pounds, with an average of about 17 feet in length, though some individuals have grown to be as long as 30 feet.
The second largest Growing up to 30 feet long, the reticulated python found in southeastern Asia and the East Indies is the longest snake in the world. These giants have an average weight of 250 pounds, but the largest known specimen in existence weighs in at a whopping 350 pounds.
But how about Africa what’s the largest species found there, The African rock python is similar in many way to its South East Asian cousin all be it a little smaller. The six largest snake species in the world specimens may approach or exceed 6 m (20 ft).
This is not is enough to make them Grootslangs, this excluding a larger undiscovered species which may live deep in the caves.
The largest snake that we have evidence for, that ever lived is a member of the python family. The Titanoboa.
Fifty-eight million years ago, a few million years after the fall of the dinosaurs, everything was hotter, wetter and bigger than it is today. The world was on overdrive more rain more heat and bigger creatures.
Rivers had turtles with shells twice the size of manhole covers and crocodiles that were more 15 feet in length, it was a time of monsters and in this world the Titanoboa thrived.
A snake more than 40 feet long and weighing more than a ton. This giant serpent looked something like a modern-day boa constrictor, but behaved more like today’s water-dwelling anaconda. It was a swamp denizen and a fearsome predator, able to eat any animal that caught its eye.
So there is an historical species that may provide proof a giant undiscovered snake could be behind the legend, but I still have to question the idea of the front section being more elephant like.
The tusks could be explained as large fangs, the elephant like ears a hood like that of a cobra, but legs! that is a little harder to explain away; the absence of legs pretty much is a defining characteristic of a snake.
So could the Grootslangs be giant lizards?
Currently the biggest lizard found in Africa is the rock monitor, large mature males can reach sizes of six feet.
This reptile is adapted to survive almost anywhere and does like take refuge in caves and holes, could a larger lizard exist with the same habits.
Biologists Alison Murray and Rob Holmes found the vertebrae of a 33-million-year-old African lizard fossil, its cousin being the Komodo, which have only been around for some 700,000 years.
This ancient species shared many characteristics with the modern Komodo but was larger, and this is when we might find a link to the legendary Grootslangs. It is said that the Grootslangs would rise up before they attacked, showing their front legs and tusks. Now picture if you will, a Komodo dragon fighting, they raise themselves up in the same manner, could this be what people saw, a startled creature rising up ready to fight?
They then framed the picture in a context of animals they knew hence the comparison to a combination of snake and elephant?
What do you think of my two theories, are these creatures nothing more than legend or could there be some truth to their existence?
Let me know what you think in the comments below.