UFO sightings associated with the sun

The sun, the star that sits at the center of our solar system without which there would be no life on this planet.
It is known that without stars and the energy they radiate they is no chance for life, the sun has been the focal point of many religions that all recognized its importance.
But how about life elsewhere in our solar system and beyond?
Does our star hold any significance for them?
It is possible it does as there have been many UFO sightings associated with the sun 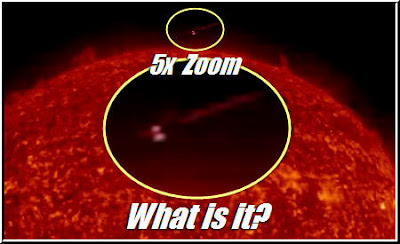 There has been a number of websites that have put forward that idea that extraterrestrials are interacting with the sun. They Base their claims on images that have captured using a variety of different means.
One of the most prominent sources for the images used to make link between UFPs and our star is the Solar and Heliosphere Observatory (SOHO).
This program was designed by NASA to look into explore the internal structure and outer atmosphere of the Sun. The giant telescope has given scientist a view into the swirling chaos of the gases that are hidden beneath the sun’s surface.
This is not the only thing that this modern technological marvel has captures it has admittedly by NASA captured images of over 3000 comets.
But SOME claim the device has captured more than that and they say that images of unidentified objects can be seen entering and exiting the suns fiery atmosphere.
As evidence they pointed out a NASA video that is seemingly showing many UFOs shooting out of our sun and around the SOHO satellite.
A UFO YouTube channel named “solar bug” has been sharing the images and video of these anomalous objects. To help with spotting these alleged alien craft he enlarges screenshots of the black white film this reveals a number of strange triangular objects.
These things, whatever they are can be seen traveling at high rates of speed and “Solar bug” says that these are craft from another world.
So what could they be doing on sun some have made a link to the alien spaceships and solar flares others say they are there to drain off some of the suns energy?
Our star being some kind of galactic filling station.

The channel posted one of the best  videos in regards to this theory its titled  ‘Is this a massive UFO feeding off sun energy?’ give it a watch.
Some of those that have watched this video are sure that this is some kind of alien ship one comments states
"The fact that the UFO is a different color and shape to the rest of the connected line is what convinced me to upload this. I was not a great believer in this plasma sun energy theory, but this has got me thinking."
Another channel that has been investigating the alien sun link is ‘STREETCAP1” this channel say that it found evidence of a massive alien mothership operating around the sun.
Streetcap1 narrates theory that The UFO may have been using the suns energy to fuel itself or to recharge in some way, he notes the appearance of the object pointing out that the UFO glows white, when compared with the sun's yellow plasma.
The speculation is that this tells us the craft is made from a different material than the sun's surface.
These UFOs also range in size from being about as big as the moon all the way to ships that are larger than the earth.
These objects were for the longest time hidden from us, we did not have the technical capability to get highly detailed images of the sun, and now that we do we are seeing a lot more than we bargained for. These images have also been supported by a group of Russian scientist who 10 years ago claimed they had spotted hundreds of objects orbiting the sun.
The hostile environment has led many to the idea that these craft are not piloted craft but could be drones, the erratic movement of such large objects and the harsh conditions have given rise to the idea that they could be some kind of drone. Maybe being used to funnel energy from the sun and onto alien civilization elsewhere in our solar system.
As is always the case there are those that oppose these ideas they say that these anomalous images are seen because the telescope is using such a massive zoom, they are just out-of-focus anomalies appearing to give such shapes in the final image.
They also say that the cause of these pictures could just be coronal mass ejections from the sun - which are an unusually large release of plasma and magnetic field from the solar corona, which often follow solar flares.
Maybe we can look to the past for answers.
The ancient alien theory and the contact they were said to have had with our ancestors may offer some clues. We as a species have long looked to the sun as the giver of life.
Yes, it easy to say that superstition played a part and that the patterns of day and night and the seasons were easily recognized and highly important to the first peoples but could there also have been some knowledge passed on from contact with an ancient alien race?

The summer solstice, the point when the sun is at its highest point in the sky was a highly important event in many ancient cultures, thousands of ancient structures from all over the planet were constructed to mark the date of the solstice.
The summer solstice was a time of great spiritual import and marked some of the oldest religious practices we know about.
The worship of the sun was abandoned by many as organized religions like Christianity and Islam spread the worship of the star was considered idolatrous–and thus something to be forbidden.
If we travel back to civilization like those of ancient Egypt and Greece we see strong ties to the sun and the importance of sun worship and a long history of claimed interaction with extraterrestrials.
The Egyptian peoples honored Ra, the sun god. For people in ancient Egypt, the sun was a source of life. It was power and energy, light and warmth. It was what made the crops grow each season, so it is no surprise that the cult of Ra had immense power.
The Greeks honored Helios, who was similar to Ra in his many aspects. Homer describes Helios as "giving light both to gods and men." The cult of Helios celebrated each year with an impressive ritual that involved a giant chariot pulled by horses off the end of a cliff and into the sea.
In many Native American cultures, such as the Iroquois and Plains peoples, the sun was recognized as a life-giving force.
Sun worship has also been found in Babylonian texts and in a number of Asian religious cults. Today, many Pagans honor the sun at Midsummer, and it continues to shine its fiery energy upon us, bringing light and warmth to the earth.
This brings us to the idea that these peoples were worshipping the sun and that the gods associated with the sun were actually aliens.
Many of the sun gods and goddesses are humanoid in form and ride or drive a craft of some sort across the sky. The vessel varies It may be a boat, a chariot, or a cup for the Greeks and Romans, the sun god rode a horse.
Hindu traditions, a culture that is also heavily connected to ancient alien theory, the sun god Surya travels across the sky in a chariot pulled by either seven horses or a single seven-headed horse.
The chariot driver is Aruna, the personification of dawn. In Hindu mythology, they battle the demons of darkness.
This is when the idea of the gods being ancient aliens becomes popular and the idea that modern extraterrestrials are one and the same as the gods of old.
The universe and our place in it has changed drastically in just over few thousand years, and now we look more to science for our answers. This is when the idea of Gods fades and the idea of aliens grows.
This having many saying

“Yes, the ancient gods were definitely aliens.”
And from this scientific point of reference it makes total sense that they would need a huge energy source to meet their demands.
Our sun fits that demand perfectly.
Energy from the sun is delivered in the form of electromagnetic energy. It is not potential energy in the usual sense of the term potential energy which is usually taken to mean energy that is a consequence of the position of an object.
The energy that is emitted from the sun and travel through space is electromagnetic energy. The electromagnetic energy of sunlight (or any other light) is manifested entirely in the oscillating electric and magnetic fields of the light.
UFOs are often said to able to manipulate electromagnetic energies in order to fly in the way that they do, so maybe the energy they use to fly is harvested from the stars?
What do you think are extraterrestrials flying into the sun, are the anomalous objects orbiting drones harvest energy or is this just errors in the technology being used to image our star?
Let me know your thoughts in the comments below.