“The Legend of the Night Marchers”

Time for a paranormal profile, these apparitions stalk the night on the beautiful islands of Hawaii.
Hawaii being home to many wonderful tales and some truly terrifying legends.
So let’s dive into tis supernatural story and take a look at “The Legend of the Night Marchers” 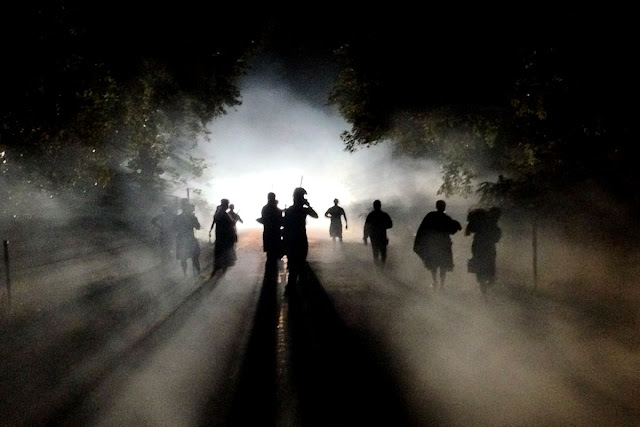 The telling of spooky paranormal tales is a form of entertainment that is shared across the world often it’s an important cultural link, this is no different in Hawaii.
The same old places are talked about with spirits poltergeist and other ghostly visions being seen in old buildings, deep valleys, sacred burial sites, ancient temple sites and deep in the forests. The beaches and lava fields of Hawaii are locations which are somewhat unique to that part of the world and they are no different to the other places mentioned with a rich history of mythology and folklore and numerous sacred sites, Hawaii's link to its past is ever present.
Many Hawaiian residents talk of the spooky encounters that they have had at some point during their lives. These paranormal witnesses often report seeing the ‘Night Marchers’ we are looking at here they however know them as the Hukai'po.
The Hukai’po or Night Marchers are ghostly apparitions of a group of supernatural beings who are seen moving in precession to the beat of primitive pounding drums.
The old legends tell of how these spirits are thought to be the ghosts of long dead armed warriors en route to or from battle, they appear carrying ancient weaponry and are said to be dressed and  in decorated historical helmets and cloaks.
Adding to the legend of the Hukai’po is the belief that a high-ranking ali'i (ruler) spirit is being guided to a place of prominence in the afterlife or is welcoming newly deceased warriors to an eternal battle. 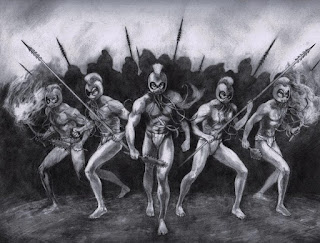 Other ideas have sprung as to why the Night Marchers stalk the hills and valleys of Hawaii, some say that these restless souls are looking to reclaim territory which was wrongfully taken from them in life, or that they are replaying an ill-fated battle and wish to avenge their deaths.
Another theory is that Hukai’po are lost and that they are searching for an entrance into the next world.
So how are the Hukai’po “Night Marchers differentiated from other types of spirit?
They can be recognized from the torches that they reportedly carry along with the rhythmic chants which accompany their appearance. They most often materialize at night hence the name “night marchers” they, like many other ghostly specters float a few inches off of the ground and yet footprints are often seen in their wake.
The night crawlers are often linked to specific Areas, they have strong ties to many locations .
These locations are often surrounded by mystery and those that are brave to venture through them at night should heed the warning given by the locals.
So if you venture to Hawaii here are few places that you must be careful when walking in the moon light;
Oahu's Pali Highway runs along the famous Kamehameha battle grounds, and nighttime visits, especially on your lonesome, are not recommended.
The local Schools campus has been around for over a century, it is said to be on the path of the Hukai’po nightly march and has visited by the Night Marchers on many occasions.
A location known as Kualoa Ranch can be found on Oahu's windward coast, the Night Marchers have been seen many times around the area and it is said to be a place that houses the remains of hundreds of many Hawaiian chiefs.
The ranch has been a hotbed of supernatural activity and the scene of many nighttime car accidents.
La Perouse Bay, an area in the Ahihi-Kinau Natural Area Preserve in South Maui, the restless Hukai’po are said to roam along the hardened lava field, a sight set to scare you just as much as any volcano.
Another historical site that has been a place of much activity is the site of an old temple, the  town of Kaunakakai on Molokai is rumored to be a Night Marcher hotspot as are the remnants of a nearby ancient temple, this temple is thought to be the final resting place of many a warrior of old.
One of the most haunted areas has a dark past La’ie on Oahu was a refuge city in ancient Hawaii, it is where criminals and offenders of the culture's strict aikapu religious practices were kept. This has led some to say that this is why today the spirits of the dead soldiers roam the outskirts of La’ie searching the night for escapees.
Many Hawaii residents believe in these legends even when they have not had a direct sighting or interaction themselves, If you are lucky or unlucky (depending on your point of view) enough to see these spirit warriors what should you do?
The ghostly procession must never be interrupted. Legend has it that resting your eyes upon the Night Marchers could signal a grim fate for the perpetrator, a friend or relative, so witnesses are urged to crouch low to the ground, "play dead" and avert the eyes. Any sound or movement could invite a Night Marcher's deadly glance. These Night Marchers are set diligently upon their destination and are not considered spirits that will deviate from their path to haunt humans nearby.
So had you heard of these paranormal entities, even better have you seen one?
If you have let me know in the comments below.