The idea that there is a ruling elite who pull the hidden strings of politics, the media and global economics and thus controls the world has long been with us. Over the millennia the names of these groups have changed. Some morphed into groups that today we call organized religion others disappeared and few linger, still said to be hiding in society’s shadows.
One women says she was horrified when she got to peak behind the curtain and saw who is really controlling things
So who or what did she see?
What is their plan, and where do we fit in?
Let’s take a look. 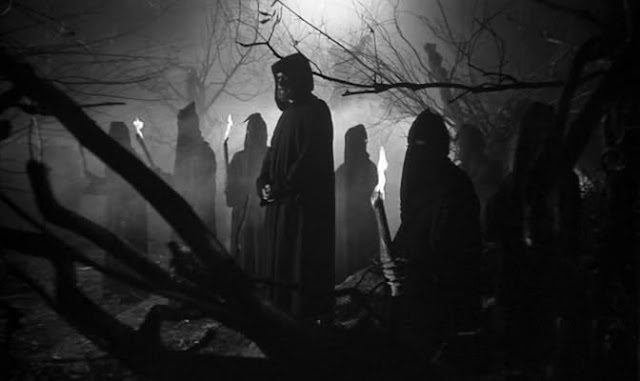 Secret societies are nothing new.
From the small groups that first practiced Christianity in secret thousands of years ago, to the most ironically well-known secret group of them all the illuminati. People have and will continue to form groups some of which operate in the open others which do their business behind closed doors.
Some of the more modern secret groups looking to control the world could be “skull and Bones” or “The Bilderberg’s” but there are also secret groups organizing the fight back, “anonymous” probably being the best known and most recent.
Whenever you hear anyone talking about these groups / me included / you will often hear people say “follow the money” Well that is almost down to the ‘T ‘what Karen Hudes a “Whistleblower” Who Believes the World Bank is Controlled By another Species of human.
The story begins with the revelation that the one brave whistle blower risked it all to bring the world the truth.
This when we are introduced Karen Hudes, this woman worked as an attorney for the World Bank from 1986 to 2007. She made the claim that during this time she stumbled upon a conspiracy for the president of the Philippines to seize control of the banks in his country. This discovery cost the women her career but gave her a new purpose, she would become a “World Bank Whistleblower”.
Karen became a regular on the TV and internet, this when the banks became the target of the mainstream media after the 2008 collapse. She would spout her brand of anti-big bank rhetoric but what evil does she say is lurking in the shadowy world of international banking?
Hudes says she was one of the first whistle blowers that told of the “massive, massive, massive corruption” which the World Bank kept quiet.
Just how much corruption was there?
One shocking claim that she made was that Jesuits had stolen all of the US gold reserves, she says “the Black Pope” now holds this gold keeping it hidden in the secret tunnels beneath the Vatican.
The Vatican must be struggling with space with the many recent stories of everything from human remains to nazi gold being hidden down there.
This is where the story takes a strange twist. 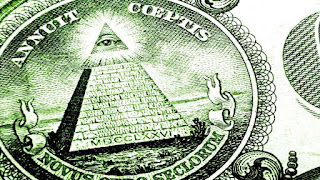 The former attorney claims that this “black pope” is different species from you and I.
In a podcast Karen said the following;
“There’s a second species on this planet. They’re not extraterrestrials. They’re very much with us. They made maps in the previous ice age. The remnants of their civilizations are all over the place – a lot of times along the coast. It’s submerged because the sea level has gone up by 400 meters. This group has large brains. They’re very distinct from homo sapiens. Their DNA is so different, that if the two species mated, their offspring would be infertile, and we know this because their DNA was just tested. They have elongated skulls which are all over the place because they have been on earth with us for a long time . But after the ice age, there weren’t that many of them, so they’ve been hiding, and one of the places that’s they’ve been hiding is in the Vatican. That’s why the Vatican are wearing those miters. It turns out that that’s what the high priest wore in the early beginnings of Judaism. Moses was actually Akhenaten, who was a pharaoh. They know this because the papyra that was taken from one of the pyramids talks about this. The people who are doing archeology in Israel know this. And the reason is, not only is homo capensis (?) trying to keep human beings under control by divide and conquer using our money system, they’ve also been doing this with our religions – organized religions – trying to get human beings to hate people of different religious faiths so that they will kill each other off, so that the people who are manipulating human beings could … use us like cattle. That’s what’s been going on through our history.”
She goes on to describe a large brained blue eyed super race and as crazy as this sounds she is not alone in this idea. Retired neurologist Edward Spencer made the same claim that a large-brained, non-human species is in control of the world.
A ruling class with elongated heads has long been a fringe theory, with many pointing to the ancient pharaohs of Egypt being the first. One thing is for sure, and that is elongated skulls are found all over the world and there are many theories which attempt to explain why.
Could the answer simply be because they are skulls from this second species?
This idea is something she is careful with, she does not mention it in most of her interviews choosing instead to talk about topics like the conspiracy theories involving bankers controlling the US and dire predictions of the economic collapse of the West.
During one of these interviews Karen spoke to reporters about a scheme where 180 billion dollars was stolen from the World Bank. When asked why this was not a bigger story the whistle blower says that 188 ministers of finance and the US Congress were involved in covering up the theft of $900 million dollars of funds designated for fighting poverty in the Philippines. She says that crimes like these are part of larger conspiracy with the ultimate goal being the collapse of the world financial system.
When asked how such a secret is being kept

Hudes said “the corporate media” has failed to report on these “facts,” because the media is owned by a single conglomerate with an interest in maintaining the cover-up.
She points to how back in 2012 former World Bank president Robert Zoellick worked for Mitt Romney and his presidential campaign and that, the media failed to report on this. She cryptically stated that she approached CBS to report on this international corruption “and they said the public didn’t need to know.” 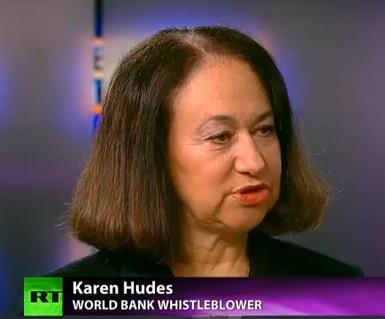 This is all part of a plan for the world a plan which she explains with her theory of “gold backwardization.”
It turns out that it refers to a two-step conspiracy theory falsely charging that 1) gold reserves no longer exist (or, in Hudes’ case, that the gold has been stolen by the “Black Pope” hominid and hidden in the Vatican), and 2) that banks are short-selling this purportedly non-existent gold to deflate the gold market. The assumptions behind this conspiracy theory are false, of course, but it doesn’t really matter. Central banks exist to manage the money supply in order to stabilize currencies and encourage steady economic growth. Conspiracy theorists and promoters of schemes involving speculation in precious metals have a different view of these things though. From their point of view, those actions are intrinsically part of a plan to drive down the price of gold, since, when currencies are stable and the stock market sound, gold speculation is less attractive. This is how gold standard true believers like Hudes and other RT economics experts come to believe that the normal pursuit of a good economy is part of an anti-gold conspiracy.
“The mainstream media is completely owned and controlled by the same companies, private companies that own the Federal Reserve System… Congress people are all bribed by these corrupt forces and the American citizens have zero confidence in their Congress… I’m not siding with Democrats or Republicans, because both of those parties have been co-opted by these terrible corrupt forces I’m talking about.”
She says that these forces are using the economic systems of the world to control and manipulate the populations of all countries. She fleshes out the idea by describing how taxes are collected and then funneled back to other countries and finally onto the Vatican.
So what is Karen Hudes up to today?
Is she still fighting to reveal the hidden species that is ruling the planet?
In short yes, most recently she appeared on the YouTube channel Ancient Magostribe to talk about Philippines Gold and Typhoons being USED in a futile attempt to recover the WW2 gold. She also spoke on the basic History which is unknown in the Philippines and the rest of the world:
This Philippines Gold ( or to be politically correct Yamashita’s Gold) was meant for all Philippino’s in Ferdinand Marcos rule which was buried under ground since World War 2 will not be getting stolen again.
So what about the Black pope and the church being in control of the planet.
at August 21, 2019