Today the world is teetering on the brink of chaos, protest sweeping the globe we are seeing historic changes taking place on scale that hasn’t occurred since world war two.
This has many believing we are experiencing the end times.
Prophecy says we can expect to see four horsemen as a precursor to Armageddon.
The first horseman of the Apocalypse is mentioned in Revelation 6:2: “I looked, and there before me was a white horse! Its rider held a bow, and he was given a crown, and he rode out as a conqueror bent on conquest. This is the leader of the horseman and is most commonly interpreted as the anti-Christ.
The first horseman could also be considered as a leader, maybe like the world leaders we see today who as long as they are okay in their gilded towers, continue to push for conflict.
The second horseman, is a fiery red one, and the harbinger of war. His arrival signifies the outbreak of a conflict that will engulf the planet he leads the way for the final two riders who will claim the lives of those that survive the battles. The world is very close to global conflict with relations between the big three powers The US, China and Russia being at an all-time and each of these nations face increasing conflict among their own populaces.
The third rider of the apocalypse is mounted on a black horse and carries a pair of scales and is associated with famine. Today we see an ever increasing gap between those that have and those that do not. The global economic systems that have long dealt with the moneys have begun to crumble.
The final horseman is probably the most infamous, death sitting upon a pale steed he ushers in the end of days and the final battle between good and evil.
Those that have religious inclination follow this idea but is there any science to back this up.
Terrifyingly there is, so let’s take a look. 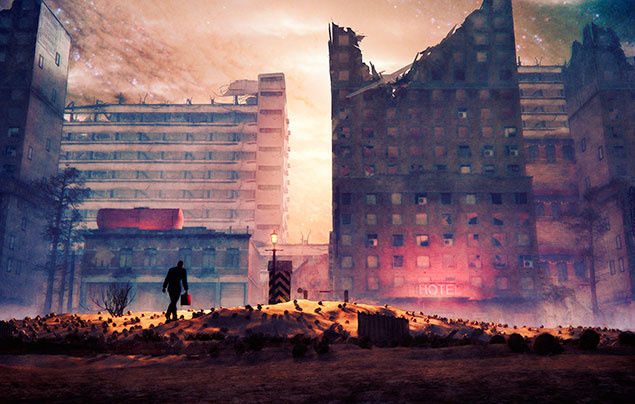 So is the world coming to an end ?
There have been a number of leading scientist that have made predictions of late that say we as a species are on the brink of going extinct. The time frame for these extinction events vary from as little as 10 years to just a century until we see the world die around us.
Let’s take a look at how and why they believe the apocalypse is upon us and if it is too late to turn the clock back or not.
Let’s begin with the 12 year prediction.
A team of world leading climate scientist have come together with plan to keep the warming of the planet to a level less than 1.5 degrees Celsius. This measurement is the point at which ‘they say’ there will be huge jump in the severity of drought, floods, extreme heat and poverty for hundreds of millions of people.

Nicholas Stern spoke to world leaders saying;
“It’s a line in the sand and what it says to our species is that this is the moment and we must act now!” Debra Roberts, a co-chair of the working group on impacts said. “This is the largest clarion bell from the science community and I hope it mobilizes people and dents the mood of complacency.”
His greatest fear is the recent shift he sees in attitudes toward climate change
Donald Trump has promised to withdraw the US – the world’s biggest source of historical emissions – from the accord. The first round of Brazil’s presidential election on Sunday put Jair Bolsonaro into a strong position to carry out his threat to do the same and also open the Amazon rainforest to agribusiness.
This could have dangerous results for the world’s climate, if temperatures rise to  2 Celsius there will be  extremely hot days, such as those experienced in the northern hemisphere this summer, and they would become more severe and more common, this would increase heat-related deaths and cause more forest fires as a start.
Long term it would lead to rising sea levels, high acidity in the oceans and lower oxygen levels this killing off much sea life.
They say these events will compound the issue, and begin a motion that will see the planet become increasingly hotter decade over decade the crisis escalating to a climate catastrophe.
A catastrophe that will see many creatures going extinct including us!!
Others have agreed with the scientist and the problems he says we face but give alternative timelines.
At a century the late great professor Stephen Hawking says we need to change but we have a little more time to do so.
As part of the BBC’s science series tomorrow’s World, Professor Hawking said he thought that due to climate change, overdue asteroid strikes, epidemics and population growth, humans will need to find a new planet to populate within a single lifetime.
Hawking said
“I strongly believe we should start seeking alternative planets for possible habitation, we are running out of space on earth and we need to break through technological limitations preventing us living elsewhere in the universe.”
He did however revise his initial date from a century to 1,000 years before his death.
One date that is currently being pushed by climate scientist, lobbyist, and the many other people who want to see policy changes and use climate change and global warming as a platform to do so is the 30 year prediction.
They say that recent Climate change doomsday report predicts end of human civilization in 30 years.
The report, terrifyingly titled Existential climate-related security risk, glimpses 30 years into the future to the year 2050 — and the results are grim.

Authors David Spratt, a researcher into climate change, and Ian Dunlop, former chairman of the Australian Coal Association and chair of the Australian Greenhouse Office Experts Group on Emissions Trading, propose a scenario in which global emissions and climate threats are ignored, and the trajectory of environmental collapse goes unchecked.
They echoes the warning of sea level rise and harsher temperatures and say that a billion people may need to be relocated, and that we will see a scale of destruction which  is beyond our capacity to model, in all likelihood it would be the end of human civilization.
And if you think this prediction was pessimistic than the next will horrify you as one of the latest times frames given to this end of days scenario is a decade!!
Guy McPherson, a biology professor at the University of Arizona, says the human destruction of our own habitat is leading towards the world's sixth mass extinction.
He claims that There's no point trying to fight climate change - we'll all be dead in the next decade and there's nothing we can do to stop it, a visiting scientist claims.
Instead of fighting, he says we should just embrace it and live life while we can.
His grim statement on the current situation
"It's locked down, it's been locked in for a long time - we're in the midst of our sixth mass extinction."
These futures scare most and we don’t want to think about a future that sees the planet become uninhabitable for future generations but we shouldn’t worry, it’s not too late there is something that can save us.
Carbon credits and the other proposed money collecting schemes that will save the earth!
This is when conspiracy enters the story and people begin to ask if this is a scam.
On 6 June 2017, Breitbart News posted an article which they titled “‘Global Warming’ Is a Myth, Say 58 Scientific Papers in 2017”.
The article tells that the ideas being shared by scientist are nothing more than alarmist musings designed to create a climate (excuse the pun) of fear.
What these 58 papers argued is that the alarmist version of global warming — aka Catastrophic Anthropogenic Global Warming (CAGW) — is a fake.
They point out how  different experts from around the globe , experts from such countries as China, Russia, Canada, the U.S., Italy, have been looking closely at different aspects of the global warming puzzle in their various regions and using different timescales and that they have come to a different  conclusion in their peer-reviewed scientific studies.
The reports they published point to there being no evidence to support the current global warming scare story.
They use a series of graphs which map the climate over the Late 20th century and early 21st century What these graphs shows is nether dramatic, nor unusual, nor scary.
The record shows that temperatures in the northern hemisphere were warmer in the early 1400s than they are today
They also point to a study from Li et al showing that China was also much warmer 8,000 years ago
In total there are 80 graphs all of which show in  different ways why the scare about global warming has been horribly exaggerated and that their evidence just doesn’t support its being something unusual or that it will be a major problem in our future.
The primary influence on warming appears to be solar activity. Few, if any, entertain the notion that carbon dioxide levels have much to do with it.
Those that support this idea or conspiracy say that this is just a move to tax the last thing that is free on this planet, the air!
The powers that be already take their piece of everything we eat and drink the ground we live on and now they want to charge us for the air that we breathe. Others have theories that form the basis for darker agendas.
Plans like agenda 21 and depollution and the relocation of populations around the planet by a secretive group. They point to other evidence like the Georgia guide stones but that is whole new conspiracy maybe for another time
What do you think about climate change is it fact or fiction, how long do you think humanity has left?
Let me know your thoughts in the comment below.