I have looked at shadow men, men in black, and black eyed kids now it’s time for another strange humanoid known as the grinning man.
This joker-esk entity is said to be seen at the location of UFO sightings and leaves those that he meets shaken and scared so let take a look at this mysterious interloper and ask
Who Is the Grinning Man? 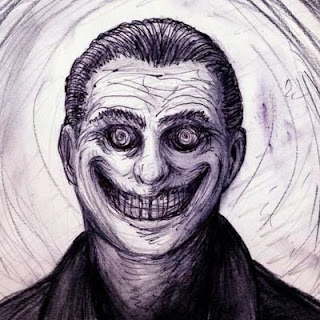 The other sightings of grinning man over the years after 1966 have been vague. These reports do often share one two things in common with the original story but there also have some crucial differences.
One of these mentions a tall, bald, scary Grinning Man wearing a shiny green jacket another describes a strange thin tall man wearing a checkered shirt which a woman saw one night. This women waking from her sleep to see the strange man at the foot of her bed watching her sleep.
Another sighting could be part of a much bigger story, The Mothman. The Mothman is a cryptid which was reported in Point pleasant before a major bridge collapsed killing many, before this collapse occurred there were a number of strange events, it’s a long story that has been covered by many so I won’t go to deep in this video.
One of these odd events was the sighting of UFOs in the area these were then followed by reports of a "giant, broad-shouldered grinning man with an unruly shock of silver hair."
The stories continue over the months and years and often feature a strange grinning man sometimes as a prowler or peeping tom but he always seems to pop up where he shouldn’t be.
It also strikes me that this grinning man shares many of the same attributes as the slender man with the exception of that massive pearly grin.
Looking through the history of these bizarre tales there is little hard proof beyond what is written in the pages of John Keel’s book. This does not mean that the stories are untrue but it does mean that maybe a skeptical should be cast over these reports.
Maybe we can find evidence in the reported UFO sightings that often are said to occur around the same times as the grinning men are seen. There aren’t any reports of UFOs found in local New Jersey newspapers from the time of the sighting so this would not seem to support the story and  that at least that part of the story is inaccurate.
But even if the tall, creepy Grinning Man that Keel says was reported by two boys was seen, exactly as the story which was penned in Keel's book and the tale told by the traveling salesman it would seem that “cold” or the grinning man is courteous and friendly.
So if you're concerned about a frightening encounter with a tall, manically smiling character, you're probably safe...at least for now.
Had you heard of this man?
Have you seen the grinning man?
Let me know in the comments below.
.