I always enjoy finding a new story regarding UFOs and extraterrestrials. Today I have an interesting tale which originates in the former USSR.
The Russians have a long history with UFOs as long as almost any other country in the world.
The Dyatlov pass incident and the secret base at Mezhgorye that have both been covered here on the channel.
I also recently looked at the alleged alien remains found in South America it would seem, Russia! Also has alien bodies.
So let’s dive into The Bizarre Case of Russia’s Kyshtym Alien

For longest time there has been reports of carcasses and other type of remains from mysterious creatures turning up in all corners of the planet. These bodies and parts are sometimes attributed to cryptids and other times they are said to be from another world. These dead bodies are usually discovered having been in some way preserved, be it natural mummification or a process carried out by man or possibly other beings. The discovery of these corpses sparks intense interest from many different groups this due to the thought that they could be the evidence that proves life exists outside of this planet.
I looked at the three fingered mummies found in Nazca and the mistaken human remains which were discovered in Atacama Desert Peru both of these stories dealt with remains of what were thought to be extraterrestrial in origin. The Russian case is slightly different because the alien in question here was found alive!!
This supposedly alien creature was said to have lived with and been taken care of by humans, it then vanishes and leave storm of questions swirling in its wake.
Going to back to 1966 and an elderly Russian women by the name of Tamara Prosvirina, the old lady enjoyed taking walks around her village. Living in the picturesque Ural region of The Russian mountain ranges the old women was part of the small community of Kaolinovy village, this village found close to Kyshtym Chelyabinsk Oblast. It was from one her walks that she returned clutching a small bundle, when asked what she was carrying Tamara replied “my baby”
When asked where this baby had come from the old lady described how she had found, what she was calling her child, under a tree near the local cemetery.
Most thought that the women was beginning to lose her sanity the onset of dementia being to blame and the idea of the child being a fantasy but when they asked to see the child the women insisted it was real but that they were not allowed to look at it. They should however know that the child was to be called Alyoshenka and that was enough.
As time passed Tamara let her guard down and a select few got to see the baby. What they saw was shocking!! 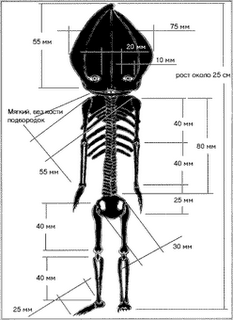 The creature they saw wrapped in swaddling was no human child, these few people looked upon a being that was around 10 inches in length grey in colour and had mottled brown spots on its head. This description has my mind jumping to the Atacama mummy both described in strikingly similar ways. The Atacama mummy was said to be human this conclusion coming from DNA testing but as I mentioned in the story those remains had an 8% discrepancy in the results, could this error actually be correct and the remains be alien.
The small humanoid was very animalistic in its appearance being completely hairless, with large bulging eyes which had vertical pupils like those of a reptile or feline.
Its face had a very small, thin-lipped mouth, small holes in either side of the skull rather than actual protruding ears, it had no eyelids, and was reported to make “squeaking noises”. Its breathing was labored as it inhaled air through its tiny flat nose. The small body was also very strangely proportioned it was obviously small, its limbs were long and slender it had long thin fingers topped with sharp claws. It also exhibited no discernible navel or genitalia.
This small body and slight features seemed to leave the creature with an inability to care for its self.
This meant that the old women became the primary caregiver for the creature. She fed the “foster baby” milk and curd as it was unable to chew more solid foods. As a treat she said that she would allow it to lick caramel candies. The “baby” also behaved strangely rarely moving or stretching its limbs and it also sweated heavily, the sweat smelling sweet.
All this adds up to what would seem to be the only possible conclusion, this was not a human child.
The story was corroborated by Tamara’s step daughter. She explained that she would visit her mother in law a couple of times in a week. She would check in and make sure that old women didn’t need for anything and that she was taking care of herself and managing living alone. It was one of these visits that she was shocked to find that the women was not alone.
Tamara showed her daughter in law the “child”
She described the encounter saying “she showed me to the bed. I took a closer look at it and saw him. He was on top the bed, squeaking some funny sounds. I could see his mouth shaped like a small pipe. His tiny scarlet tongue was moving. I also spotted two teeth inside. In a way, he looked like a little baby. His head was brown, and his body looked gray. I didn’t see any eyelids. He didn’t have any genitals either. His head looked like an onion. And the pupils of his eyes were widening and narrowing just like the cat’s eyes do when you turn on the light and turn it off again several times in a row. The fingers on his hands and feet were pretty long. I only bothered to ask my mother-in-law where on earth she’d got the monster from. She told me she’d found him in the forest. She kept calling him ‘Alioshenka’. She gave him a candy and he started sucking on it. I thought it was some kind of animal.
The thing was giving off that smell, you know, one of a kind. You can’t take it for any other smell. Actually, the smell was pretty agreeable yet somewhat nauseous at the same time. And he didn’t pass any liquid or solid waste matter. He was sweating, and that was all. I saw the mother-in-law wipe the sweat off his face with a rag.

The story spread through the village and eventually it reached the ears of the local officials. They expressed concern for the women and assumed that this story was a sign of detreating health.
They decided to step in and take the old women into care. They went to the village house of Tamara and took her to an intuition. As the women was be taken away she struggled and protested all the time saying that her baby would die if she left it alone. Thinking the women delusional they cries fell upon deaf ears.
As the news of the old women’s departure spread through the village curiosity grew as to what was in the house, a couple of days passed by and then a man named Vladimir Nurtdinov decided investigate the home.
He uncovered the creature, dead and somehow it had mysteriously become mummified. Maybe this a natural process , the sweat of the creature was said to smell sweet if it had a high enough sugar content it would be able to preserve the remains. Sugar is often used as preservative did this happen naturally with this small humanoid?
The body was allegedly taken by police, and this is the point when the story begins to get even stranger. The investigating man ‘Nurtdinov’ was arrested for stealing wire from Tamara’s home.
One of the arresting police officers took an interest in the body. He took it home with him and stored it in his refrigerator. He began documenting the creature using photographs and video later he made claims that he had had the body tested by various medical experts.
DNA was found in the samples which didn’t correspond with any human genes or anthropoid apes. None of the gene samples that were available at the laboratory used to sequence the DNA matched the genes of the creature. These experts in DNA research said they hadn’t come across any creature with such an elongated DNA molecule.
This is when once again, we see similarities coming to pass that could link the Atacama mummy to this story.
Other experts wrote the story off as fiction and claiming that it was nothing more than a deformed child, another said it was a malformed fetus removed prematurely from the womb.
Again not everyone was behind the deformed human explanation with another expert saying that it was not human and that it showed decidedly anomalous bone structure, organs, and physiology, and he was uncertain of the creatures origins.
The police officer believed the final expert and focused his research learning from those in the field of ufology. These researchers persuaded the man to hand over the body and this when it disappears. Trying to retrieve the remains the man was stone walled at every turn, he was greeted by excuse after excuse each time he investigated the location of the possible alien body.
Maybe he was becoming a problem because as with many that have had dealings with hard physical evidence of extraterrestrials on this planet he was kept guessing as to what had become of his evidence and as for the other crucial witness Tamara Prosvirina she was killed in an accident, mysteriously run down by two vehicles in 1999 shortly after being released from the state run institute that she was taken too by officials.
The cause of the accident was never seriously pursued. Witnessed said that She was seen dancing about in the middle of the road in some sort of trance before the accident it happened. What was going on here?
Was she killed by people who wanted to keep this a secret or was this just a freak accident with very coincidental timing?
The death of Tamara put an exclamation point to the story.
Since that day things went cold no one really knowing where the body of the “Kyshtym Dwarf” has disappeared to. The only evidence of this story that is available today are the photos and the video taken by the police officer along with what is claimed to be the cloth used to wipe sweat from the creatures body.
Still many believe that this Russian story is true and that the Russian government has hidden the body. Those that think this is a hoax say it is no more than a human fetus. Another theory claims that it is a human fetus but one which has been horribly deformed due to radiation. Kyshtym being the location of a nuclear disaster when 20 million Curie units of radiation were leaked from a broken container this the third worst nuclear accident after Chernobyl and Fukushima.
What do you think this little humanoid was, do you think it was alien if not what do you think it was?
Let me know in the comments below.