I have looked at the many claimed extraterrestrial objects that have been found here on planet Earth. We have seen objects like the dropa stone discs and the claimed extraterrestrial remains found in Peru and Russia.
Recently there has been an increase in the number of strange objects falling from the sky.
Particularly Metallic spheres.
These Mysterious Metallic Spheres are tumbling from Space and landing all over the planet.
So what could they be?
Are they some sort of probe or maybe a seed of some as yet to be understood alien lifeform?
Let’s take a look. 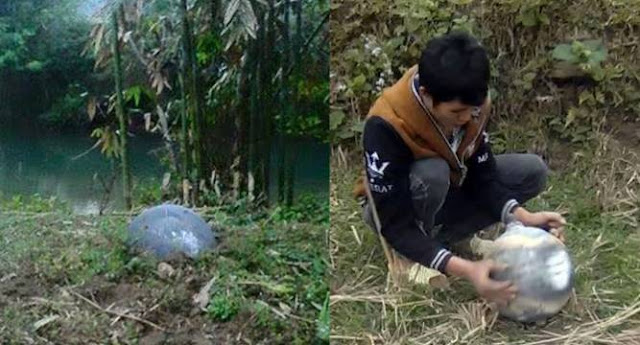 Many locations around the world have been reporting metal spheres crashing into the ground, spotted streaking from the sky in a fiery flash, they then smash into the earth creating large craters and scorching the ground.
They then are said to roll away from the area of impact, some travelling as far as a mile and a half away from the original impact location.
Australia, China, Brazil, Spain and Central America have all seen these spheres landing but none have found a definitive answer to what or where they are coming from.
One recent location of a metallic sphere impact was Vietnam.
Three of the metal orbs fell to earth in the north of country bordering China and they have left the military scratching their heads as to what they are.
Tuyen Quang province was the site of a large military investigation which was reported by local media agencies, the military were spread over a wide area of the province as the three metal balls were spread some distance apart.
These objects were of different sizes and different weights the heaviest was reported as being 45 kilograms.
Locals claimed they could hear 'thunder' in the moments before the mysterious items crashed into the surrounding the field.
One of the orbs, which weighed 6kg, narrowly missed a house, landing in the garden of a house in the Yen Bai region, while the smallest, weighing only 250 grams, landed on a roof before rolling onto the ground.
The officials have yet to issue an official determination as to what the spheres are, but some have claimed that they are the fuel tanks or compressed air tanks from orbiting Russian satellites.

The similarities in the Vietnamese metallic balls and the others found around the world can easily be seen, as in a Spanish a orb crash reported by the Residents of a small village.
These residents of the Spanish village have been left with many questions after theses metal orbs landed in their fields. The farmers found many objects spread all over the area and the local media issued reports of objects that were around one meter (3.2 feet) in diameter and weighed in around about 20 kilograms (44 pounds).
The Spanish authorities took the incident very seriously and went ahead with deploying their civil guard. The soldiers were equipped with hazmat suits that are capable of protecting them against threats from chemical, biological, radiological, and nuclear agents.
This team inspected the metallic orbs and found that they weren’t explosive and that they didn’t contain any dangerous materials.
The mayor of the region in which these things fell spoke of his concerns saying
“I think it is a more serious issue than it seems. Citizens have real concerns about what is happening and deserve an explanation, where are these objects coming from?
Why are they falling here precisely?
Will more fall?
“And what would happen if any of these balls fall into a highly populated area?”
He raises some valid points of concern, is just coincidence that these balls are falling in unpopulated areas, could this show some planning to the locations in which they fell or is it just a matter of time until someone is struck by one of these metal marbles.
Crossing continents to India and an incident that happened on that most unfortunate of days, Friday the 13th.
More metallic orbs fell to earth in What authorities of the Indian region said they considered to be space debris
A spokesman from the police said: “It looks like a piece from an aerospace vehicle, but not a commercial plane. It could be a piece of satellite or something similar.”
There has been those that say the object which fell was not from outer space, they base this idea on the lack of an impact-crater.
Space debris tends to fall to the ground at terminal velocity. For a sphere roughly one meter in diameter, IFL Science estimated that the terminal velocity would be 9.4 meters per second, or 21 miles per hour. This would be enough to hurt a person, but not leave a crater.
The next location of metallic sphere impact is
Peru a land often associated with ancient aliens saw 3 strange metallic spheres crashing into the ground this event leaving scientist baffled.
In total three spheres fell from the sky and were caught on video by many people living in the Peruvian villages. Streaking through the sky like comets these objects are often spotted thanks to the glowing tails that flows behind them.
The numerous sightings has had people asking questions about who could have done this and where the spheres came from initially.
It would certainly seem odd that if this phenomena is attributed to manmade craft that so many parts should be fall off and tumbling to earth on such a regular basis!
This is when the extraterrestrial element to the story can be found with many speculating that these metallic orbs are some precursor an alien invasion.
Maybe some of the past incidents can provide us with more of an answer?
Going back to the year 2011, a year when one of these cosmic spheres crashed or landed in Namibia. This orb had a 14 inch diameter and its impact left a crater more than a foot deep and 12.5 feet in width. Local authorities were quick to quarantine the impact site but quickly came to the conclusion that the object posed no threat.
Maybe we can find some answers in a more detailed description.
Those that have found a metallic sphere report that they are hollow, when tapping on the outer shell an echo can be heard, and when they land they are strong enough to remain intact and even though they burn furiously as they enter the atmosphere they survive reentry relatively unscathed.
It is noted that The orbs seem to be constructed of separate closed hemispheric pieces, welded together in a shape that is clearly manufactured.
The authorities often claim that these objects are from manmade orbiting vehicles as example the explanation for the Namibian Sphere was said to be hydrazine tank(s) from unmanned spacecraft, the propulsion storage cells for satellites.
They explain the accompanying booms as being a sonic sound blasts due to the tremendous speeds the balls are travelling when they enter our atmosphere.
They move so fast that they break the sound barrier in the same way as jet.
The Namibian sphere was featured in A handout photo provided by the National Forensic Science Institute which showed the giant metallic ball, 1 meter in diameter weighing some 6 kilograms.
Space scientists suggested that the source of the sphere was most likely a failed satellite that may have exploded scattering pieces over a wide area.
To me these objects do not sound like debris from an explosion, they do after all remain largely undamaged and we mustn’t forget they somehow always land in unpopulated areas!!
The scientist say that this because the tanks are constructed from Titanium and are often wrapped in protective materials, they say these materials burn off on reentry leaving the metal ball to crash into the ground. If this is true then where are the other pieces of the satellites or even small chunks of debris which would have to be found near the metallic spheres and what about the owners of these satellites surely they would be able to tell us if they had a lost a satellite.
It just doesn’t sound that clear cut, too many questions remain.
These objects remind me of the Klerksdorp spheres, small objects, often spherical to disc-shaped, that have been collected by miners and rockhounds from 3-billion-year-old pyrophyllite deposits mined by Wonderstone Ltd., near Ottosdal, South Africa.

I looked into them in the video linked above.
Could this new round of orbs discoveries be of the same origin, could that origin be extraterrestrial?
These Space balls, are of various sizes and are most often metallic most are distinctly extraterrestrial in nature, others have been identified to be space debris from man-made satellite parts.
The as yet to be identified examples of cosmic spheres remain mysterious, what do you think they are where did they come from or who sent them?
Let me know in the comments below.