Alien visitation has been occurring on this planet for hundreds of thousands of years depending on who you talk to. The extraterrestrials have long had the technological ability to travel the stars with relative ease. The ships or saucers if you prefer that they fly must be capable of immense speeds. The old sci-fi trope of warp drives and hyperjumps maybe true.
Today humanity is approaching these level of technical ability and soon we may be able to travel the stars with the same ease as our alien cousins.
Declassified files have shown that the US government has been working on such technology as Stargates, Antigravity, and Warp Drives 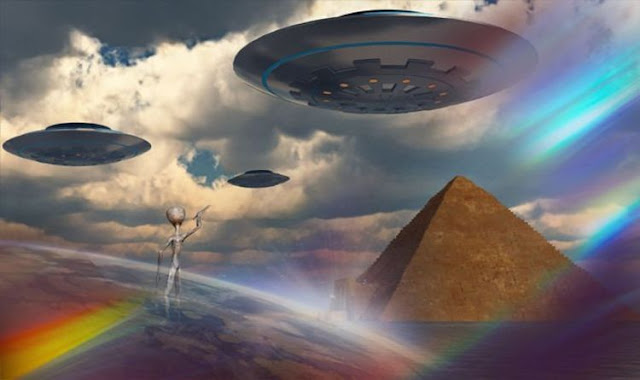 The freedom of information act has released a tsunami of files that were once classified and has given many researchers a goldmine of once-secret intelligence reports to comb through.
These files show that the US government has long been researching and investigating UFO sightings. This keen interest stemming from the chance to discover some kind of advanced tech that would see the United States gain a strategic advantage over of its enemies.
The AATIP the Advanced Aerospace Threat Identification Program has ploughed billions of dollars into research and this money has left us with a paper trail.
The group is said to have been working 38 projects, these covered such a variety of fields and was overseen and managed by The Advanced Aerospace Threat Identification Program.
The first document shows technologies that belong in the latest epic space movie.
We see advance forms of propulsion which hint at deep space travel, wormhole technology making space jumps a real thing and if we are jumping into new areas of space we best be protected so an invisibility cloak has been thrown in for good measure.
We obviously cannot know how successful they were in developing these projects, any equipment or craft that could have been built would obviously be kept highly secret.
This links to the discoveries reportedly made by Gary McKinnon.
The British man is said to have hacked the Pentagon and NASA.
Gary faced extradition and prosecution in the US for his alleged crimes that were said to have occurred in 2001 this was until the British Prime minister stepped and protected him. McKinnon claimed that he had discovered information that would be world changing.
He said that he saw proof of a fleet of vessels, manned, and operated by the United States military.
The vessels were long and looked a little like satellites they had domes on top and along the bottom and oddly they seemed to be held together without the use of rivets or welding, he could not see any seams on the craft and mentioned that they did look almost alien made.
We must remember this was in the days of dial-up and before 4k so image quality would not the best.
His story does, however, point to a long existing secret program going on above the earth’s atmosphere, this combined with Trump's public statements on space force 1 we can conclude that there are some ongoing research programs be carried out by the country in space.
The second document shows the logistical and engineering aspects of these projects. It contains project titles like;
Metamaterials for aerospace applications.
Technological approaches to controlling external devices in the absence of limb operated interfaces.
Metallic glasses
And space communication implications of quantumentaglement.
The third file has a list of technologies that could be used to propel the ships reported by Gary McKinnon.
We can see projects named;
Aneutronic Fusion propulsion
Quantum tomography of negative energy states in a vacuum
Negative mass propulsion
The last on the list is the Sci-Fi staple of high energy laser weapons.
These projects certainly seem to have been dealing in cutting edge science and would be expensive to develop but with the huge black budget money that defence intelligence agency has access to.they could certainly fund this research and even if they were successful in only one or two of the projects listed it would be of such an advantage to the U.S that investment would be seen as worthwhile.
We must also remember that we are dealing with a super-secret agency and that they employ all the tricks they can to keep what they are really doing out of the public eye and absent from the public record.
Could these programs really be cover for something else, the fantastical technologies that are alluded to in the titles certainly catch the eye and would be a great diversion from projects that were a little more mundanely named but were where the real breakthroughs were being made?
Getting back to the space force, they requested $270 million in funding for the year 2020 and this budget request is considered to be a modest amount.
The money would be used to establish U.S space command headquarters, now there is an organization that would need and use the technologies that were listed in the released files.
The air force would incorporate this new military wing and it has traditionally been the air force that has been involved in all things UFO on and over U.S soil.
They also have the locations that would be needed to test the technologies, in particular, the propulsion technologies. Going way back to the days of operation OX cart and the sr71 the air force has always been at the bleeding edge of technology.
There is no reason for this to end and in fact, it looks like they are getting ready to ramp things up.
Are we living in the age of mobile space defence bases, an era that will see vehicles that will have the ability to fly in and out of the atmosphere at will? Are we seeing the building of a fleet interstellar craft that will be capable of hyper jumping their way through the universe?
The future is here if we believe in the projects that have been outlined.
We are living in a science fiction world and if this is the case we must ask some important questions.
Why are we still fighting over oil?
Why are so many still living in poverty?
And who have we met amongst the stars?
Let me know your thoughts in the comments below