Cryptozoology is field of research that many make fun of. The possibility of creatures that do not fit with the established path of evolution are often  ridiculed as being impossible or that they are merely legends and myths used to teach a moral or life lesson.
Others say that these animals are just a way to explain things which for thousands of years were not understood by man.
These ideas however do not go unchallenged, occasionally a creature fully accepted by modern science breaks the mold and becomes an animal that would easily be classed a cryptid if it weren’t already known.
One such animal does exist
And it has become the stuff of nightmares and legend 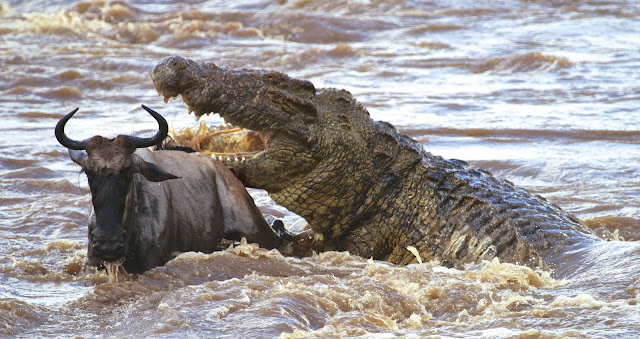 This story comes from a lake that is known as the second oldest freshwater lake in the world, and the second deepest. It is the longest freshwater lake on the planet.
Found in Africa this body of waters northern shores are said to be home to a creature that belongs on the silver screen.
A creature that carries the scars from machine gun fire and is known to drag people to a watery grave, this monster is reportedly over 18feet in length and tips the scales at 200lbs.
Given the name Gustave by the locals and a herpetologist named Patrice Faye, this animal is basically an indestructible killing machine.
So what is this beast?
What animal stalks the water of Lake Tanganyik
Is it some kind of dinosaur or dragon, Maybe a lake monster in the vein of Mokele mbembe, a giant snake, or maybe a rampaging hippo?
Gustave is none of these, but is in fact is a crocodile.
It is said that this monster size crocodilian hibernates for long periods of time emerging once in a while to carry a murderous killing spree along the length of the river. The animal is so feared that even the normally fearless hippopotami stay out of the water when he is around.
The animal became popular after he was the star of a 2004 documentary which followed a team who attempted to capture the monster.
As you can imagine they were unsuccessful in their endeavor, however they did capture images of the real life lake monster these showed that Gustave is huge beast dwarfing all over crocodiles seen around him.
Hollywood was quick to cash in on this legend making the movie “Primeval” and of course he must have inspired other movies like “Lake Placid.” These films showing a cheesy animated crocodile that inspires laughter more than fear.
Gustave is a real living horror!
The croc has a body count of over 300, in area that often has crocodile attacks, this number is high. 200 people in the region fall victim to the Nile crocodiles in an average year.
The Nile crocodile is the largest fresh water predator in Africa and is only second in size to the saltwater crocodile globally. The apex predators lay submerged waiting for an unfortunate victim to cross their path, they often stay hidden beneath the water for weeks and there is no animal they cannot take down including man.
Using their powerful bite they sink their sharp conical teeth into a limb and drag their prey to bottom of the lake.
Death comes from drowning and not the animal’s powerful bite.
This is why Gustave is as feared as he is ,  it is claimed that once he has taken a victim from one location he will continue to return and kill dragging people to the depths and into his underwater larder.
For a population that live along the river edge this really is a something that is constantly in the back of people’s minds. Each time the go fishing, wash clothes, or their children play in the shallows, they have to wonder if the giant will snatch their loved ones away!
Stories about Gustave say he is a well-known man eater that is often blamed for attacks even those that he may not have actually committed.
Gustave does have his distinct scaring which makes him really easy to identify and usually witnesses are able to verify these markings and prove that an attack was in fact Gustave.
Gustave also has some locations which it favors when hunting. The animal has been tracked to a handful of areas that are deep enough to conceal its huge mass and allow it to hunt.
Attacks which happen in other areas are probably regular crocs but people do enjoy the infamy that dropping Gustave’s name adds to a story.
So why is a certified man eater like Gustave allowed to roam free?
Why has no one put an end to the monsters killing sprees?
It is simply because he is not the biggest problem or even the most prolific killer that the people of Burundi face.
They live in area of ongoing conflict and disease, these issues are far more likely to spell their end then the monster that hides in the depths of the lake.
For the moment the monster has once again become silent, sightings and reports are mostly from between 2004 and 2008 with an unconfirmed report popping up in 2015.
This has led to speculation of the giant being gone forever, maybe succumbing to old age or be killed in some other way.
We must remember though, that this is the creatures M.O and maybe he has enough bodies stashed under the water to keep him going until he once again rises to hunt and replenish his supply of meat.
Who knows, maybe bigger, hungrier, and more ferocious?
Had you heard of this killer croc?
Would you like to see more factual creatures covered here on the channel?
Let, me know in the comment s below.