I have mentioned the Ningen a couple of times in other cryptozoology videos but for whatever reason I kept skipping them when writing a new video.
Well that stops today.
Let’s look at these mysterious white giants of the deep
Let’s see if we can reveal a few of their secrets 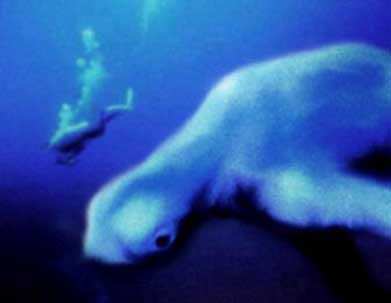 To recap for those of you that have not heard about these strange creatures the Ningen are described as having a pale white, human-like figure with a torso, appendages, and fingers like ours, but with a mermaid-esque tail. It has minimal facial features with a small slitted mouth and two vacuous eyes. The size of the mysterious creatures is closer to that of a whale than that of a human. Between 60 and 90-feet in length, the Ningen has been described as being a humongous, “blubbery, whale-like creature,” The name Ningen 人間 meaning human in Japanese.
The colossal creature was first spotted by Pacific fishermen in the 1990s.
A report states that crew members saw what they first thought to be a submarine far off in the distance. They neared it and could see the object was shaped irregularly and wasn’t something man-made. It was a natural and they believed it was alive. As they were getting closer to the mysterious behemoth the creature quickly disappeared under the waves and back to the dark depths from where it came.