The reason why UFOs and UFPS are seen in our skies has long been up for debate.
Many of the UFO believers feel sure that these 'Alien Craft' are actually here to protect
Us, maybe by stopping a nuclear war even shooting the missiles down and vaporizing the threat.
So could this be reason for the extraterrestrial presence?
What evidence is there to support this idea?

Bones and fossils have long been an excepted way to identify species from this planet. The history of our world is often advanced in leaps and bounds with the discovery of a new missing link and even animals that were completely unknown.
Could the field pf archeology help us with answering the question of alien visitation to this planet?
We are familiar with the many ancient sites found around our planet that many say were constructed by or with help from extraterrestrials.
Other forms of evidence have been a little harder to come by, or have they?
In this video I will take a look at some artifacts that could once and for all prove that there has and continues to be an alien species living here on planet earth.
Alien skulls!

The internet is awash with many images of bones and skulls that are said to be alien in origin, many are never given over to others for inspection or scientific examination, this being somewhat of a red flag.
There have been a few that have been tested with some fascinating results.
Let’s start by looking at a few of these amazing finds.
These include partial bones, skulls and even complete mummies.
There has been many claimed images from Mars that are said to show the remains of long dead extraterrestrials and many believe that these show that the planet was inhabited. The problem with this evidence is that we cannot physically examine the relics and this means that no matter how good or convincing these pictures are they cannot be regarded as concrete proof of Martian life.
We have been fortunate, in that on this planet, we have found similar things and we are able to subject them to testing in an effort to identify their origins.
Starting with one of the stranger stories, the discovery of alien remains inside of the stomach of a fossilized dinosaur.
Paleontologists in Oklahoma City were reconstructing the remains of long dead dino which had been sent to them for restoration. As they worked through the fossil they were shocked and amazed to find a somewhat human like skeleton inside of what would be the stomach area of the animal.
What is odd is that this dinosaur was no carnivorous monster like T-rex it was a 60ft sauropod dating from 110 million years ago, a time long before some of our most distant relatives evolved.
The fossilized humanoid was very alien in its appearance it had the disproportionately large, bulbous skull and almond-shaped eye sockets which are commonly associated with the look of grey aliens.
The size of the alien was said to be around 4 feet in height and the large braincase indicates that it had a big brain and was intelligent.
So why has this story not been bigger news?
Government scientists got wind of the find and whisked the man-like remains to Dr. Posvby's Washington lab for further research. The University of Oklahoma scientists who found the dinosaur say they are under "strict orders" not to say anything to the press about finding an E.T.
The incident being covered up.
This secrecy however has not been the case with all the alien remains that have been discovered, two of the most famous reports are the tiny mummy found in the Atacama Desert of Chile and the three fingered mummies of Nazca Peru.
Let’s take a look at the Atacama Mummy as there has been an extremely in depth investigation of the remains.
The small skeleton is roughly 6 inches in length and possess a strange long triangular shaped skull the eye sockets are somewhat almond shaped and there are fewer ribs than would normally be found. The age of this being was said to be between 6 and 8 years at the time of death.
Found some 15 years ago the speculation on what this being could be has ranged from a human child with severe birth defects to an unknown species of monkey and as it is included in this video an alien.
The mummified remains were given the name Ata and featured in the documentary “Sirius” the documentary shows the investigation of the body with Ufologist and qualified medical physician Dr Steven Greer taking the body for a variety of test.
Ata offered a unique chance to prove that aliens are living on this planet due to the recent time period it was preserved, being only 40 years old the likelihood of being able to extract usable DNA foe sequencing was very high.
This is exactly what happened, scientist were successful in their extraction and mapped Ata’s DNA unlocking the secrets which had been kept for four decades. These finding showed that disappointingly the bodies was human. The unlocking of the genome revealed not only that Ata was not an extraterrestrial but that she had a tragically short life.
Born of Chilean ancestry she suffered from a rare genetic disease that caused rapid aging having a combination of seven genetic mutations that caused musculoskeletal deformities, like scoliosis, and skeletal dysplasia, known as dwarfism.
These factors leading to an early death.
Some still cling to the idea that she was not entirely human this due to an anomalous 8% of DNA which could not be matched to the human genome but this is considered a reasonable amount for errors and discrepancy.
So let’s see if we have more luck with the third case, the three fingered mummies of Peru. 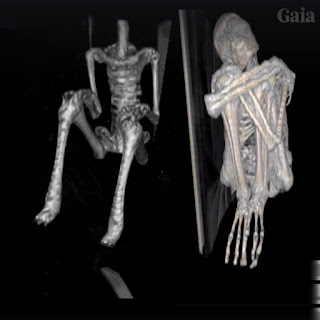 These amazingly well preserved "mummified corpse" are the proof that has so long been needed by ancient alien theorist.
The three fingered three toed beings were discovered near the Nazca lines. The Nazca lines being the massive Peruvian geoglyphs which can only be seen as complete images from the air and have long been associated with ancient aliens.
The excavation of the remains was documented in a short film that for a while was a viral sensation, this had many claiming that the whole thing was clearly a hoax.
These bodies were of a similar height to the remains that were allegedly found inside of the dinosaur’s stomach. They ranged in sizes between 4 and 5 feet in height, they had elongated skull, small nose and just ear holes and the three fingers and toes that the mummies became known for.
The bodies were subjected to CT scans and X-rays which revealed bone structure beneath the chalk covered skin.
Many experts were quick to say that this was a manmade body and that it didn’t make anatomical sense when viewed from a position of what we know about biology.
Many say that they wouldn’t after they are alien and their evolution would create bodies that are suited to another world, the debate still rages on and more test are scheduled to find a definitive answer.
One strange thing which could lend more credibility to these mummies is another artifact that was given to Inca historian and tour guide Brien Foerster.
Foerster can be found on YouTube and writes many articles on the history of the Incan empire and the mysterious structures which they left behind.
He and his team claim to have been given the three-fingered specimen by a group of cavers who were exploring desert tunnels in southeastern Peru. The explorers said it was found near a strange elongated humanoid skull that was also given over.
These have yet to be tested, one skull that has been tested is that of the star child.
The star child is another ancient skull that was analyzed after many thought it to be of alien origin, one interesting thing they did with this skull was use a forensic artist to recreate what the being looked like with muscle and skin. The process known as facial approximation uses fixed points and similarities we have in muscle density and position to give a representation of a long dead face.
The star child does look almost like a hybrid, but much of the art is left up to the artist so it cannot be 100% accurate.
Deformation of the skull had been a tradition followed by many peoples of the world, elongated skulls that have been stretched and deformed from childhood are found on all continents of the world. Often this tradition is linked to religious beliefs this leading us into the idea that many of the faiths have a basis in UFO interactions something I have also looked at on the channel.
Could these artefacts and mummies be real?
Are these remains proof of extraterrestrial visitors?
Let me know your thoughts in the comments below.