The Men in black

Chris Hemsworth and Tessa Thomsom will attempt to capitalize on the success of their Avengers End game and Thor Ragnarok success in the next movie of the Men in Black franchise. Another comic book based film, focusing on the secret group of black-suited agents who police alien life on this planet.
Lowell Cunningham’s characters were first created in his comic book series of the same name published in the 90s.
The inspiration for the comic book series and subsequent films were the real reports of shadowy, dark figures that are often reported in and around strange events. The presence of the black suited mystery men has become a staple in today’s ufology.
Many witness them at the scene of UFO sightings or report their arrival soon after. So who are they when did they start showing up and what do they want? 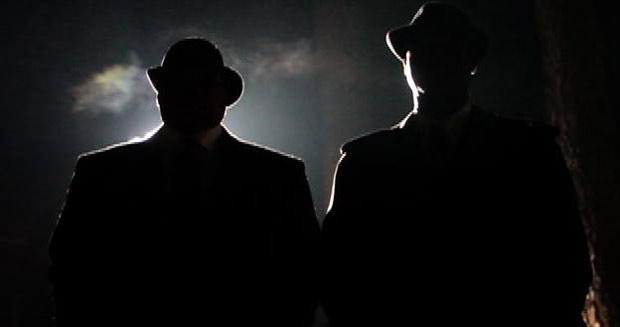 The Men in black phenomenon has been deeply rooted in UFO subculture, long before being turned into a comic book and then movies and cartoons reports of spooky almost inhuman suited men were reported. The popularity of these ‘mystery men’ grew thanks to shows like the X files that introduced the UFO conspiracy and in turn the MIB to a wider audience.
As with many aspects of modern ufology this begins with the sighting of “nine shiny discs” by a private pilot named Kenneth Arnold In the summer of 1947.
What Arnold saw that day led to the press coining the term “flying saucers.”
This also marked the birth of the legendary Men in Black, another witness to what was now known as “flying saucers” was a one Harold Dahl. Harold had seen similar craft to Arnold that summer he told many people of his experience and was interviewed by many a local reporter.
Harold enjoying his fifteen minutes of fame was not surprised when there was another knock at his door, after all it would most likely be someone else wanting to hear his story. Harold was wrong and in for shock!
Standing at the door was a man in a dark suit who promised to harm Harold if he continued to disclose details of his UFO sighting.
Harold’s sighting which would later become known as the “Maury Island Mystery,” was investigated by the Air Force officials, on conclusion of the investigation they declared the incident to be a hoax. Harold did not protest, it would seem the visit from the MIB had the desired effect and silenced the man.
But the story was already out and people around the US and in turn the world began to learn of the visit from MIB, the dark suited mystery man permeated popular imagination, and from that point on accounts of men in dark suits have been connected to UFOs reports.

Albert K. Bender furthers the story with one of the most well-known reports of the phenomena, back in 1952, Albert created the International Flying Saucer Bureau. His goal was to document the increasing number of sightings of strange objects being spotted. He was looking for an answer to these “flying saucers”
Much in the same way as MUFON gathers reports today Bender was amassing a good collection of data and becoming well versed in the odd things happening in the 1950s sky.
Soon he received a visit from three men in dark suits, they threatened Albert with imprisonment if he continued his research into UFOs.
Bender was of the mind that the men who threatened him came from the U.S. government, agents of secretive group sent to cover up secretive Government programs.
Others believe the MIB to have another explanation.
We need to be a little careful here because when talking about this subject there are two groups the first “men in black” use no capitals in their name the second the M and the B are capitalized “Men in Black”.
The first  group are thought  to be human government agents who have been tasked with the cover up  of government secrets, when they are seen they are said to look human, all be it with the stern look of G man.
The latter, from which the title of the movies and comics was taken, are described as being something else.  Ufologist John A. Keel named the MIB “demonic supernaturals” who behave in distinctly non-human ways.
British ufologist Nick Redfern, penned a book on the mysterious men in suits. The book is filled with the reports of the sinister and deadly MIB. Witness testimony combines with papers from some of the leading figures in UFO- and paranormal-themed research to provide an outstanding look at this creepy and disturbing phenomenon. It is a mysterious, macabre, and menacing journey into the world of the dark-suited silencers.
Nick says that the MIB are often reported as grim-faced, shadow-like characters with shining eyes and who leave behind an odor of brimstone when they quite literally vanish. They are often described as looking not quite human. Their skin resembling plastic. They wear wraparound sunglasses these only partially mask their huge, oversized eyes.
They are clearly unaware of our customs and manners. Some of them don’t seem to even know how to eat food or drink water
People who have encountered the MIB have fallen sick. A kind of paranormal infection making them ill after a MIB visit. The MIB are said to be able to place people under a form of mind-control, something which compels the targeted person to open the door and let them in, this regardless of the time of day or night. Witnesses to UFO activity who have been visited by the MIB also make reports of poltergeist activity occurring in the home.
All of this strange activity would make anyone fearful of the men in black, but what if like the Movies and comic books they are the good guys?
They may not be running around blasting aliens to puddles of slime but they may be helping witnesses not fall into a deep hole of obsession with UFOs and the mysteries which surround them.
Nick writing for ‘mysterious Universe’ explains that people who experience UFO sightings often develop an intense interest in the subject. 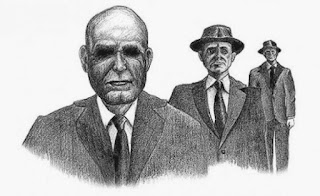 He says how he knew several people whose interest in the UFO subject, over time, went from being an interest to a full-blown obsession. Paranoia set in. They came to do nothing but dig into the UFO issue, almost on a 24/7 basis. Having fun, hanging out with friends, going out and having a good time on a Friday night, and knocking back a few beers went out of the window.
A couple whose lives were crippled and ruined by Ufology, mental illness, divorce, and even a cry-for-help-style suicide attempt. There is something about the UFO subject that, now and then, seems to provoke negativity and  paranoia.
This is when the MIB step in, are the warnings they give people meant as way of helping people avoid these horrible obsessions.
Nick compares the MIB to a man and his dog. The man takes his dog to the vet, the man is helping the dog but to the dog it’s a place of pain and no amount of explanation from the man can change the canines mind.
The MIB are the man and we are the dog, they show up to tell us that the path we are heading down is not good and will have negative outcomes but the clearly non-human Men in Black are incapable of properly getting across the message. This then results in the MIB looking like they are threatening people, Maybe they’re just doing their best to keep us away from UFO-driven realms filled with paranoia, obsession, fear and stress.
What do you think, MIBs are they good or bad?
Are the men in black human or something else?
Will you be going to see the new movie?
Let me know in the comments below.