Ancient Artefacts of a Lost Civilization.

Modern Archeology would like history to follow a nice neat linear progression when it comes to the development of technology. Discoveries daisy chaining through time, from a sharpened stick to stone tools until we reach today’s digital age.
This however does not fit with the realities of history.
Many objects have been discovered that do not fit with this idea on how technology was created, there are objects that should not exist.
They show huge jumps in either the way they were constructed or what they could do.
One such object is the Schist Disk. 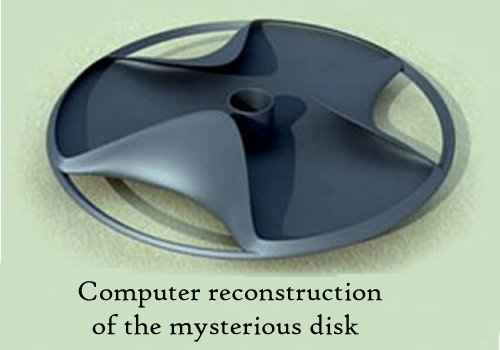 The Schist Disk is a relic that some say is a Mysterious Piece of Sophisticated Technology which could mean the History books will need to be rewritten.
Other strange technologies which do not fit with history have been discovered, the Antikythera Mechanism is one such artifact and is considered the world’s oldest known computer.
A 2000-year-old clock-sized device contained an elaborate collection of some 30 interlocking, spinning gears that controlled dials that tracked the Sun, the Moon, eclipses, planets, and the schedule for the Olympic Games.
Stone disks are also regularly found, these are claimed to hold records from the ancient past.
The Dropa stones (a subject we looked at in the link above) to More than a dozen mysterious carved discs found near Volgograd, Russia.
These Russian disks are larger than the Dropa stone disks. The UFO investigation team who made the discovery, claim that the stone disks are thought to be around a million years old, they theorized that they are most probably alien military drones that were damaged in an attack on Mars before falling to Earth.
And we can talk about ancient technologies without mentioning “oparts” Out-Of-Place Artifacts.
The many remarkable and controversial ancient artefacts that could re-write history.
From 300-320 million-year-old screws to yet another circular artefact, The Genetic Disk.
The Genetic Disc is one of the most interesting and confusing finds of archaeology, it’s not made of artificial materials like cement but of lydite a rare black stone and measures about 22 cm in diameter.
It weighs about 2 kg. On the disk, there are carvings that describe the astonishing knowledge of our ancestors. The object has been examined in the Museum of Natural History, Vienna, Austria and still defies explanation as to why or who constructed the disc.
This brings us to the Schist disc similarly Researchers are still not sure what kind of extraordinary object they have.
The Schist Disk, is approximately 61 cm in diameter (24 inches), one cm thick, and 10.6 cm (4.2 inches) in the center.
The disk has been dated to about 5,000 years ago it has been suggested that it is a component of an ancient unknown advanced machine.
The disk was found back in 1936 being unearthed on the plateau edge of North Saqqara near Djoser's Step Pyramid in Egypt.
Djoser was the first king of the Third Dynasty of Egypt and it is said he was the first to build in stone.
The king built an impressive tomb by stacking mastabas (squared stones) on top of one another, each block smaller than the last, to form the structure we now  know as the Step Pyramid.
The discovery of the disc in the Egyptian sands was made by British Egyptologist Walter Bryan Emery (1902-1971). From the moment it was first unearthed it was thought to be part of some larger unknown mechanism which the Egyptologist was keen to find.
He extensively excavated the tomb of Sabu.
Sabu was the son of Pharaoh Aneddzhiba and a high official or administrator of a town or province possibly called "Star of the family of Horus".
The disc was part of a collection of artefacts the archaeologist recovered from the tomb.
This tomb was said to have had no stairways and sand filled the structure from floor to ceiling. This sand was cleared by Emery and his workers as they dug the sand away they discovered stone daggers, vessels, flint knives, arrows, few copper tools and the most interesting artefacts being bowl fragments.
These fragments would be reconstructed into a disk.
The craftsmanship of such an object was amazing, still today nobody knows how it was manufactured. The disk is very fragile carved from extremely delicate material its carving would have been extremely difficult and very tedious. A challenge to craftsmen even in modern times.
So what was the device meant to do?
What machine was it part of?
Who constructed such a fine and exact object?
Scientists have investigated the disk and have come to some interesting conclusions, they do not believe the disk to be a wheel, this because the wheel first appeared in Egypt about 1500 BC.
The Schist disk is way too old to fit with this date.
It would push the Egyptians knowledge of the wheel back to 3000 BC and would mean some serious re-writes would be needed to the historical timeline.

Many have suggested that the disk is merely a decretive item this because of its fragile nature, such an intricately carved stone object is greatly limited in its practical usage and they say this suggests a religious or other such ritualistic purposed object.
Others claim a purely practical purpose, the disk being used to drive a foot oil lamp.
These mundane theories have been shot down by others who argue that the three-blade ceremonial lamp is hardly possible. They say the shape and curvature of the disks blades, seem to suggest a function, not just decoration. They believe that we are dealing with an unknown advanced form of ancient technology.
This idea is that the ancient Egyptians had technological capabilities far beyond what is commonly thought.
Cyril Aldred and Egyptologist reached another conclusion, he and others says that the disk is a copy of a much, much older object. An object which was most likely metal. Erik von Daniken proposed that the disk was an internal flywheel of an ancient space ship’s hyperdrive system.
Sceptics say the ancient Egyptian artefact is an incense holder, they point to similar objects which seem to have been used for incense but are made from clay.
They say although extremely difficult to do, the carving of the brittle sedimentary rock lydite is possible with a careful hand.
But how could a culture, which at that time, used basic chisels to shape rock have mastered such a refined technique, working with such a delicate material to such an extraordinary level of ability?
In a final strange twist, the disk has been said to closely mirror the design of flywheels that Lockheed developed to be fitted hermetically within a case filled with lubricant.
During the 1970s, engineers of the Lockheed Missile & Space Company came up with the design of a light-rimmed wheel, claiming it is best suited for saving energy in mass transit trains or storing energy in electrically powered trolley-buses.
Electricity they say, well that fits with the idea held by many  that ancient Egypt had discovered and used electricity.
So is the Schist disk a similar technology from ancient times?
If it is it would shatter the perceived view of humanity’s past. One thing that is certain is that The Schist Disk's futuristic design continues to baffle all who have seen it.
What do you think, was this simply an oil lamp or decorative religious object or was it a part of some long lost machine?
Let me know your thoughts in the comments below.