There are names in the field of ufology that anyone with even the slightest of an interest in the subject has heard of.
Bob Lazar, Dr. Steven Greer, Stanton Friedman, Nick pope, Linda Moulton Howe, and Giorgio Tsoukalos to name but a few.
One man was instrumental in forming the modern field of UFO study, was an American psychiatrist, writer, and professor, a winner of the Pulitzer Prize and a dedicated researcher into a subject that at the time received much ridicule.
John E. Mack
Let’s take a look at the man who was one of the first to seriously question “are we alone”.

So who and what was the scientist known for.
The groundbreaking work of Dr. John Mack, particularly delving into the extraordinary case of the children of Ruwa, Zimbabwe, shaped the way in which research into UFO sightings is carried out.
The man spoke on the subject saying to a group which had gathered to hear him speak at a book store in 2000;
“The alien abduction experiences themselves are often initially quite frightening. Yet over time many experiencers form a powerful bond with one or more of these beings. People become deeply connected with these entities.
“They have palpable experiences that are just as powerful, sometimes more powerful, than relationships here. They view them not just as these cold, calculating, indifferent big-eyed creatures, but bonds develop between experiencers and those strange creatures which often has an intense, transcendent, spiritual, sometimes even erotic, element to it.
“. . . [They] are coming now ‘because they are conscious that we as human beings on this planet are destroying ourselves, and they love us and wouldn’t see this happening.’ They are trying to influence us by bringing knowledge and understanding of our connection to each other and to the Earth and a reminder that ‘we are just one part of a big, big whole.'”
This statement coming toward the end of a Mack’s long and varied career.
John E. Mack’s early career saw him regarded as something of an Academic Superstar amongst his peers. 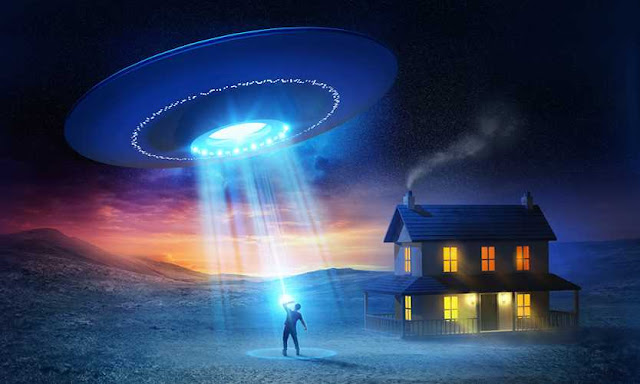 He played an important part in the developmental of child psychology, this culminating with a Pulitzer Prize for his book A Prince of Our Disorder in 1977.
1977 also saw the professor become the department head at Harvard Medical School.
John E Mack spoke to US presidents and was a proponent figure in talks leading to nuclear disarmament. His work in this area saw him receiving the Nobel Peace Prize in 1985.
Then in the 1990s his career changed from the established safe academic path of his early years to, what those who held him high regard thought was a subject reserved for his patients and not the good doctor.
Ufos, aliens and abductions.
He began researching documented cases of Alien abductions. He would meet with these UFO contactees and took the witnesses and their stories seriously. This embarrassed many of the colleagues that he worked with in mainstream academia, making John somewhat of an outcast.
He began to meet with all those that were part of the ongoing investigations into extraterrestrial abductions.
He studied the data with an open mind, the stories and evidence he saw made the scientist realize that even if only of the cases was proved fact, then the established paradigm of humanity being alone in the universe would be smashed.
Talking about his research in 1992 he said;
“What was so powerful for me was the very precise correspondence of the experiences people were reporting, coming forth with great reluctance from all over the United States and all parts of the world.”
The doctor noticed patterns in reports and similarities in the evidence that was presented something real was happening to these people and it was a phenomena which seemed to be on the increase.
He estimated that as many as three-million Americans during the 90s may have had such an experience.
He set strict criteria for those that claimed to have been abducted and developed rigorous tests to weed out those that were looking for attention with a fake story. He uncovered a wide demographic of abductees ranging in age from toddlers to retirees.
These people came from every walk of life and in many case the only thing these people had in common was their abduction story.
He went on to say,
“What I and others who have worked with the trauma of this have discovered is that the abductees begin to feel that their experiences were for a purpose or had a positive meaning to them. They feel that the experience is expanding their consciousness that they are connecting with themselves that they are opening up to a whole new perspective on reality.”
It was an investigation in 1994 that saw the Professor encounter what maybe some of the strongest evidence he ever found.
In September of 1994, a group of students took their morning recess in a small school in a little known village of Ruwa, Zimbabwe.
It was during their break time that the 62 children witnessed several disc-like objects maneuvering through the morning sky. These objects shooting around the air before finally landing in a wooded area next to the schoolyard.
Then to the shock and amazement of the stunned children two strange-looking beings emerged from one of the craft, and approached the kids.
The students, whose ages ranged between 6 and 12, reacted in a number of different ways. Some ran about excitedly, a few were brave enough to go and inspect the craft and the creatures.
The youngest students were frightened and began to cry. Some were frozen to the spot and stood staring at the creatures, allegedly receiving messages telepathically from the occupants of the unidentified craft. 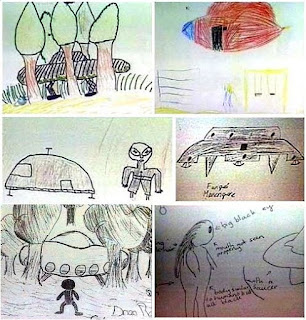 Reports said the children ran to their teachers to report what they had seen. However, most of the adults did not believe the children. The story was reported in local news and began to gain traction and the attention of experts.
Investigators visited the school, Cynthia Hind spoke with the students and corroborated their claims, and she linked the incident to a rash of UFO sightings reported in the area a few days prior.
John Mack heard of the encounter and in November of the same year flew down to Africa with colleague and anthropologist Dominique Callimanopulos to document the case.
Over the next few days the two researchers interviewed the children asking them to draw what they had seen. What they drew was consistent across all images, a spacecraft in the shape of a large silver disc, bright lights, and a red stripe running around the outside edge of the disc.
The children drew no support structure for the craft, all depicted it hovering above the ground and some reported hearing a strange hum being emitted from the disc. They went onto to describe the alien visitors Saying that they wore tight black suits, were exceedingly thin, had small slits for mouths, and—most eerily—possessed large, powerful eyes “likened to rugby balls” .The creatures gaze seemed hypnotic.
The children were adamant that these beings and their craft were not from this planet, calling them “aliens from another world.”
Several of the students reputed that they had, had telepathic communication with these beings. The aliens showing the children an apocalyptic messages about the destruction of our environment.
A warning of a terrible future that humanity may face.
The children were left shaken by the incident and were visibly shaken and somewhat subdued, whatever had happened took a toll on them.
This is when John Mack’s expertise as a psychiatrist came into play, interviewing all of the children with well-crafted questions and compassion he went in search of the truth about that day.
From the body language, the genuine emotion, the sense of conviction, to the stunning consistency of the children’s claims, it was apparent they were telling the truth, and there was no hint of delusion.
They were telling the truth and their retelling of this story has remained consistent until today.

Cynthia Hind, who was the first investigator to arrive at the Ariel encounter, praised the professor, calling him
“Not only open-minded and prepared to listen, but an academic of some standing. And one who risked his credibility with his colleagues to come out and say he believes the experiences of abductees are very real.”
She went onto say;
“John Mack told me that the children behaved and talked as if they were totally sincere. In the footage I viewed, it certainly appears as if they were telling the truth. I think the children, as a voice of innocence and authenticity, offer a perfect contribution to the awareness that many people are growing into. More people are coming forth and speaking about encounters that they’ve had with otherworldly beings. More and more people, as well as many noted physicists, are thinking about the possibility of different dimensions of reality.
“We’ll probably always have skeptics who do not want to stretch their thinking about reality. John Mack used to talk about how people would have a certain paradigm about reality but become resistant when something new would come along like a crop circle, sighting, or an encounter with an extraterrestrial being. Accepting these aspects as real can be difficult for some people; they have to give up their old beliefs about reality and their worldview has to stretch and grow.”
It would seem that Dr. Mack was a revolutionary thinker, he put his academic position on the line.
His Insistence on expanding the definition of reality beyond our established restricted worldview, shined a light on the positive experiences that these beings bring and that they could be spiritually transformational. 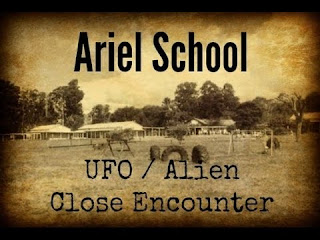 He paved the way for today’s ufologists and He may have still been doing so today if he hadn’t tragically been killed by a drunken driver in 2004.
Did you know about the professor and his work?
Do you think this school encounter is the proof of extraterrestrial life that so many have been looking for?
Let me know in the comments below.