a new species of Giant Lion.

Lions have been part of mankind’s culture from the very start, often used as symbols of power the big cats have been both feared and revered.
The king of the jungle holds a special place in our hearts as well as being an important part of our history
Lions were the most common carnivores during the late Pleistocene, they ranged from southern Africa to the southern USA. Despite this large range they have kept their history hidden, how these cats were related what interactions the many populations had being difficult to uncover.
It would seem lions create great stories whether you’re talking about a magic wardrobe or tracking genetic markers across time.
This story of the lion has just gained a new chapter with the discovery of a new species of Giant Lion. 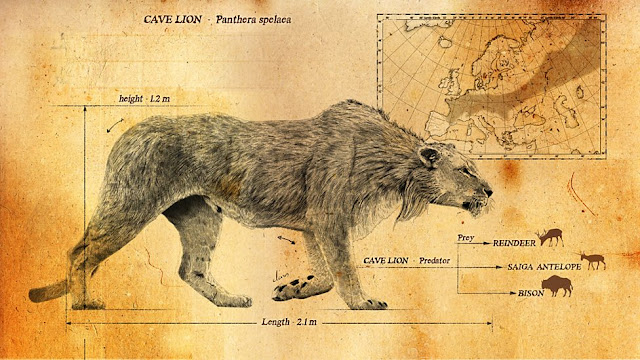 Using ancient DNA analysis three distinct groups of lion have been revealed.
The first are the modern lions, Panthera leo these are followed by the now extinct Pleistocene cave lions, this species forming the major population of lions which extended from Europe across Siberia, Alaska and western Canada.
The final extinct big cat species were the American lions, they made a separate population south of the Pleistocene ice sheets.
The cave lion went extinct around 12,400 years ago. It was one of the largest subspecies of a lion to have ever been found until the recent discovery that is, more on that later.
Experts believe it was as much as ten percent larger than modern lions. It's often depicted in cave paintings as having some kind of collar fluff and possibly stripes.
The lion reminds me of the legendery Mngwa, the cryptid big cat of Tanzania more on that story linked above.
The cave lion would have been one of the most feared predators of the late Pleistocene age.
this relation to the modern lion was a plus-sized cat that roamed the vast expanse of Eurasia. It feasted on a wide variety of the mammalian megafauna alive at that time, this included horses and prehistoric elephants.
The Cave lions also preyed opportunistically on hibernating cave bears, this habit earning the name “cave lions.”
Could these animals have persisted longer than we thought and given rise to the legend of the Nemean Lion?
Was there an even bigger big cat that may have inspired the story?
Let’s look at the Nemean lion.
The Nemean Lion is found in Greek mythology and is part of a tale in which the ferocious cat ravages the area of Nemea.
Legend say that its fur was impenetrable by the weapons of man and that this made the beast an unstoppable force.
Created by the gods Typhon and Echidna, and in some telling’s Zeus and Selene King Eurystheus
Was given the task of slaying the Nemean Lion. King Eurystheus was no fool and he asked the demigod Heracles to deal with the monstrous cat.
Heracles tracked down the lion and attempted to kill it by shooting arrows. This was a futile effort because of the animal’s impenetrable fur.
In a second attempt Hercules waited until the lion entered its lair from one of the two entrances to its cave. He then blocked off the second entrance, and entered the cave himself.
A battle to the death erupted and Hercules managed to kill the lion by strangling it with his bare hands.
He then tried to remove the skin from the lion but his knife was unable to cut it. The goddess Athena decided to help and told him to use one of the lion's claws to skin the creature. Heracles emerged victorious and was said to wear the lion’s skin as a trophy from that day on.
A giant lion with a cave as a home could this have been a living Cave lion or something else.
The something else could be the recently discovered Simbakubwa kutokaafrika.

This giant lion had enormous fangs and roamed the Kenyan savannah more than 20 million years ago.
It was one of the largest ever meat-eating mammals to have lived.

A team of archeologist recently unearthed the lower jaw, teeth and other bones of this new species, naming it Simbakubwa kutokaafrika the Swahili for "big African lion".

They calculated that the animal   would have weighed up to 1,500 kilogrammes and could have preyed upon the large elephant-like creatures that lived there at the time.
The team of scientist from Duke University and Ohio University said;
"Based on its massive teeth, Simbakubwa was a specialized hyper-carnivore that was significantly larger than the modern lion and possibly larger than a polar bear."
An artist's impression of the creature shows a giant big-cat- with striped fur and enormous fangs a rendition very similar to those of cave lions only larger.

The team behind the study, published in the Journal of Vertebrate Paleontology, said Simbakubwa lived in what is modern-day Kenya around 23 million years ago, a key period in the evolution of carnivorous mammals.
They said the discovery could shed light on how supersized predators and prey evolved over millions of years around the end of the Paleogene epoch -- the period where mammals grew from tiny rodents into many diverse species.
Do you think these mega sized cats survived longer and gave rise to the legends like Hercules?
Did these cats make such an impression on our ancient ancestors that they lived on in our psyche?
Let me know what you think in the comments below