The Wendigo, also known as The Wetiko is a mythical man-eating creature or evil spirit native to the northern forests of the Atlantic Coast and Great Lakes Region of the United States and Canada.
Believed to be the embodiment of gluttony, greed, and excess: never satisfied after killing and consuming one person, they are constantly searching for new victims. The wendigo may appear as a monster with some characteristics of a human or as a spirit who has possessed a human being and made them become monstrous. It is historically associated with murder, insatiable greed, and the cultural taboos against such behaviours.
Although descriptions can vary somewhat, common to all these cultures is the view that the wendigo is a malevolent, cannibalistic, supernatural being. Often depicted as a bipedal being with desiccated skin, with flesh tightly pulled taut over it's bones and it's bones pushing out against the skin.
It's eyes sunken deep into their sockets, The Wendigo resembled a gaunt skeleton recently disinterred from the grave. It is said that the Wendigo appear as giants much larger than a human being.
What lips it had were tattered and bloody ... Unclean and suffering from suppuration of the flesh, the Wendigo gave off a strange and eerie odor of decay and decomposition, of death and corruption.
In Ojibwe, Eastern Cree, Westmain Swampy Cree and Innu lore,
Whenever a wendigo ate another person, it would grow in proportion to the meal it had just eaten, so it could never be full. Therefore, wendigos are portrayed as simultaneously gluttonous and extremely thin due to starvation. In some traditions, humans overpowered by greed could turn into wendigos; the myth thus served as a method of encouraging cooperation and moderation. Humans could also turn into wendigos by being in contact with them for too long. 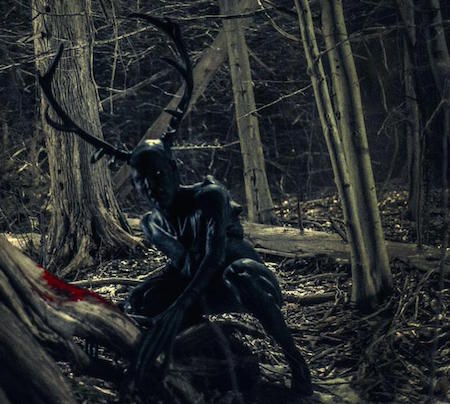 In another version of the story, the first Wendigo is said to have been a warrior who made a deal with the Devil. In order to save his tribe, he gave up his soul, and was transformed into a Wendigo. When peace ensued, there was no need for such a fearsome creature, and the warrior was banished from his tribe, and forced to live as an outcast. Some believe that the human person continues to reside within the Wendigo, specifically where its heart should be. This person is frozen, and the only way to kill a Wendigo is to kill the human within it as well. A few legends state that the frozen person is successfully rescued from inside the creature; in most cases, however, death is the only way to free a person from the Wendigo. Wendigo are believed to roam around the forests where the Algonquians lived, and forest dwellers that disappeared over the years are rumored to have been eaten by these creatures. Many Wendigo sightings have been reported over time, not only by Native Americans, but by white settlers as well. For example, between the late 1800s and the 1920s, a Wendigo is said to have appeared near a town called Roseau in northern Minnesota. It has been claimed that each time a sighting of this creature was made, an unexpected death followed.
The sightings, however, eventually stopped, and things went back to normal. Amongst the Cree, there is a traditional dance called the ‘Wihtikokansimoowin’, or ‘Wendigo-like dance’. During the dance, the fearsome Wendigo is portrayed satirically by the dancers. In addition to satirizing the Wendigo, some Native Americans even became ‘Wendigo hunters’

Whether in the form of a beast or a spiritual entity, the Wendigo possesses supernatural abilities that make it impossible to escape. Despite its gaunt figure, it is unnaturally large, fast, and strong, with heightened senses and endurance. The Wendigo is a hunter, immune to even the harshest climates.

It stalks its prey and can mimic human voices, so its favorite pastime is luring people away from safety and driving them mad deep in the wilderness in order to consume or possess them.

Some say the Wendigo infects its host slowly, tormenting them as it takes over the mind and body. It begins with strange odors that only the victim can smell. Then they are plagued with nightmares, their sanity melting away from their sleep-deprived minds. They’ll experience an unbearable burning sensation throughout their legs and feet and usually end up stripping down, running naked through the forest like a madman.

This is usually the last anyone sees of those cursed by the Wendigo. The few who have returned from the woods after suffering Wendigo fever have been said to come back utterly insane.

According to the lore, the longer a Wendigo walks the earth, the stronger its powers become. The savage creature can eventually learn to control the weather and to call upon darkness before sunset.

The Wendigo also gains the ability to manipulate other creatures of the forest: it can summon predators and force them to attack on command.

Its speed and strength also grow with age, as does its ability to heal. 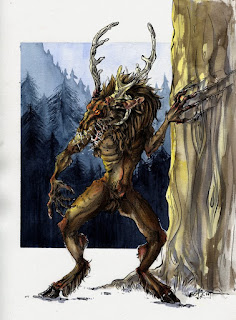 Back in 1878, a Cree man named Swift Runner was only 25 miles away from the Hudson Bay Company’s supply post when he was overcome with the need to butcher and eat his entire family. The winter of 1878 was brutal and Swift Runner’s son allegedly died due to the harsh conditions. Whether Runner and his entire family consumed the boy after his death is unclear; what was found were the mutilated remains of Runner’s wife and his five remaining children.
Runner confessed to killing and eating his family, but he blamed his actions on a Wendigo. He was put to death by authorities at Fort Saskatchewan.
Swift Runner was a Cree Indian who lived during the last century in what is now central Alberta. His background seemed not unusual. As a young man he received a solid useful Cree education; he married and had a family of six children; he traded with the Hudson's Bay Company; and, in 1875, he served as a guide for the North West Mounted Police.
But Swift Runner's life ended in tragedy and notoriety. During the winter of 1878-79, a time of starvation and misery for the Cree people, he became possessed by the Windigo psychosis (an aberration characterized by grand delusions and cannibalistic impulses that anthropologists have identified in several Canadian Indian cultures). He murdered his wife and family and cooked and ate their flesh. Eventually he was arrested, brought to trial, and in December, 1879, hanged at Fort Saskatchewan.

Inspector Sévère Gagnon was given the task of investigating Swift Runner’s behavior. He and a small party of policemen accordingly trekked out to the trapper’s camp.

Swift Runner obligingly showed the Mounted Policemen a small grave near his camp. He explained that one of his boys had died and was buried there. Gagnon and his detachment opened the grave and found the bones undisturbed.

That, however, did not explain the human bones scattered around the encampment. Gagnon produced a skull, which Swift Runner willingly told him was that of his wife. Without much prodding, Swift Runner revealed what had happened to the rest of his family.

At first, Swift Runner became haunted by dreams. A Windigo spirit called on him to consume the people around him. The spirit crept through his mind, gradually taking control. Finally he was Windigo, and Swift Runner no longer. Then the Windigo killed and ate Swift Runner’s wife.

This accomplished, the Windigo forced one of Swift Runner’s boys to kill and butcher his younger brother. While enjoying this grisly repast, the spirit hung Swift Runner’s infant by the neck from a lodge pole and tugged at the baby’s dangling feet. It was later shown that he had also done away with Swift Runner’s brother—and his mother-in-law, though he acknowledged that she had been “a bit tough.”

The revolted Mounted Police party hauled Swift Runner and the mutilated evidence back to Fort Saskatchewan. The trial began on August 8, 1879. The judge and jury did not view the Windigo idea in the same light as the Cree. They saw Swift Runner as a murderer, and the trapper made no attempt to hide his guilt. Stipendiary Magistrate Richardson quickly sentenced him to be hanged.

The sentence presented a problem: the police had never before conducted an execution. Although the Hudson’s Bay Company had once hanged an employee for murder, this was, for all intents and purposes, the first formal execution in western Canada. Staff Sergeant Fred Bagley, a force bugler, was put in charge of the arrangements.

A gallows was erected within the fort enclosure at Fort Saskatchewan, and an old army pensioner named Rogers was made hangman. On the appointed morning, a bitterly cold December 20, Swift Runner was led to the scaffold.

Standing over the trap, the unrepentant cannibal was given the opportunity to address the large crowd that had gathered. He openly acknowledged his guilt, and thanked his jailers for their kindness—then berated his guard for making him wait in the cold!

Nevertheless, the Mounted Police must have accomplished their first execution well enough. A more experienced spectator, a California “forty-niner” named Jim Reade, commented, “That’s the purtiest hangin’ I ever seen, and it’s the twenty-ninth!” 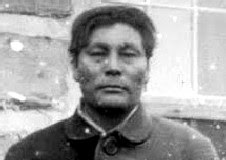 What the Cree thought to be the work of a Windigo spirit nowadays we view this behavior as psychosis. At one time, in the belt of parkland that borders the northern plains, it was far from being a rare phenomenon.
Usually the symptoms were the same as those displayed by Swift Runner. And in one way or another, most of the afflicted Windigos met similar, violent deaths.
So what did you think?
Is the wendigo stalking the forest of North America?
What other cryptid or paranormal event or creature  would like to see covered here on the channel
If you enjoyed this video please show Ryan some love in the comments


Ryan Tremblay Contacted me with the idea of taking a look at the wendigo and things grew from there.
Ryan researched and wrote this