99 Percent Of The Earth's Species Are Extinct.
This is tragic, so much loss of species has occurred through extinction that there are many creatures lost to history that we know nothing about.
However, luckily, there have been occasions that species that were believed to be extinct were rediscovered.
Recently a Fernandina Giant Tortoise was spotted on the Galapagos island of Fernandina.
The first time since 1906 that the reptile was seen
Then there’s the Wallace's giant bee which was spotted in Indonesia for the first time since 1981.
One of my favorite creatures the Tasmanian tiger or Thylacine was captured in a photo by Farmer Peter Groves of Clifton Springs, Victoria which appears to show the long-lost animal.
Another beast of past that I like which could also still be with us is
The Moa.
Let’s take a look. 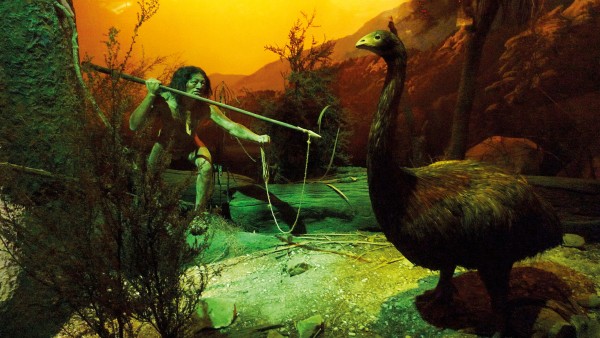 The Moa was or is an ostrich like flightless birds native to New Zealand.
There were many species of Moa with estimates varying from 9 to 64 different types.
Among these species, the birds varied in size being about the same proportion as a turkey to being larger than an ostrich.
Some example stood as tall as 10 feet in height and weighed in at 250 kg about 550 pounds.
The name for these behemoths “Moa” comes from a Polynesian word for fowl or bird.
This avian giant was said to be a fast runner, which when cornered would defend itself using kicks.
I think it could be compared to the cassowary a large, flightless bird still found in Australia and Papua New Guinea today.
These birds have killed! 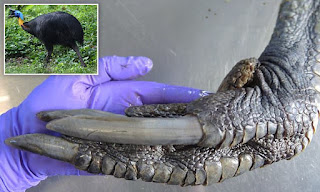 They use the 10cm dagger-like claw they have on each foot to slice open any predator or potential threat with a single swift brutal kick.
Yet the Moa even with its great size and powerful legs was still wiped out by man or so it is claimed.
Scientists say that the giant bird was eradicated by its contact with humans and that no other natural occurrence like volcanic eruptions, climate changes or diseases were to blame.
The giant birds vanishing less than 200 years after the Polynesian settlers had arrived.
Or did they?
In the 1840s, Australian bird painter John Gould claimed that he saw a Moa.
He described seeing birds that were the same as "giant kiwis" this occurring on the South Island of New Zealand.
These Giant kiwis were around a meter in height and had spurred feet.
Gould's spurred feet description had matched those of fossilized Moa footprints found on the North Island.
Then In 1978, a Japanese research team investigated the South Island to see if Moas were still living in the area, but they didn't find any evidence of the animals continued survival.
An explanation for the sighting by Gould and others over the years claims that people who are reporting to have seen Moas were exaggerating, or seeing large individuals of known birds, such as cassowaries or emu.
Others still argue that some small species of Moa continue to survive in to the present.
They point to other evidence such as Photos of "moa" footprints found in Fiordland and evidence elsewhere in New Zealand which they say is proof that the extinct birds are still roaming the countryside.
Rex Gilroy the New South Wales natural science researcher, said he was closing in on the colony of the presumed-extinct little scrub moa in the Urewera Ranges.
The cryptozoologist, said he had evidence of a small colony surviving in the area.
The researcher and his wife continue to search for the bird, they periodically find evidence but have yet to find definitive proof of a living population of Moa.
Others need more evidence Hawke's Bay cryptozoology researcher Tony Lucas is keeping an open mind to the idea of moa still being alive in the region being investigated by Gilroy, but thinks the evidence he and his wife have found more likely points to emus.
Expeditions Mr Gilroy plans to carry out involve him and his team visiting another eight sites throughout the South Island, all areas that have seen witnesses make report of moa sightings.
One sighting by some road workers tells of how the workers were sheltering from the heavy rain.
They were in a shed, waiting for the rain to stop, and on the edge of the jungle were two birds emerging from the bush, about eight feet in height. And they were chewing leaves off trees, the men were sure they had witnessed living Moa.
The possibility of moas existing was also bolstered by an Auckland Hiker who auctioned off photos, he claimed were of a moa.
The photos, including images of footprints and of a 1.8m-plus tall bird, were sold for more than $350 by the hiker, who goes under the seller name Andrewdb on Trade Me.
He described the encounter in the sales description of the online site saying.
"I was hiking in Fiordland last Monday and as I came up over a rise, there in front of me was the largest bird I've ever seen,"
The auction started a lively debate, with one member amusingly stating: "... all back country Kiwis know that the moa's alive and well, we just didn't want any bloody tourists finding out.
Another witness Paddy Freaney, claims to have spotted Moa in the Craigieburn Valley in Canterbury and his story received international attention.
He also had photographic evidence.
The sighting and out-of-focus photograph of what the man said was a 2m running bird were taken seriously by the Department of Conservation, they investigated the pictures and then the location but could not find any conclusive proof of the bird.
However, there is still hope that we will one day see this bird again even if it has become totally extinct.
Much in the same way as the many stories report on the plans of resurrecting mammoths, which do the rounds periodically.
The same scientific efforts are being aimed toward the Moa.
Because moas were hunted to extinction recently, their feathers and eggs can still be found relatively intact. In fact, moa DNA has already been extracted from ancient eggshells, and projects to clone the moa have already been attempted.
Revive and Restore the nonprofit conservation group stated that De-extinction projects and the probability of the Moas return increases with every improvement in ancient DNA analysis.
This technology also holds hope for other extinct animals including some human relatives.
Waiting in labs for advances in cloning and incubation are the nearly complete extinct genomes of the Moa, The zebra-like quagga, the woolly mammoth, the passenger pigeon, and also includes two human relatives, Neanderthals and Denisovans.
Scientists are also close to reconstructing the genomes of the dodo, the flightless bird that went extinct from Mauritius in the late 1600s and they are working on bringing back the great auk, which lived in the North Atlantic before dying out in the mid-19th century.
Researchers in Australia unveiled the genome of the Tasmanian tiger, the last of which died in captivity in 1936.
It would seem that it is only a matter of time before these creature once again get to roam the earth and humanity repairs some of its mistakes of the past.
What animal would you like to see brought back?
Do they need to clone these creatures or should they just try harder to find them?
Are people really seeing long extinct animals?
Let me know you thoughts in the comments below