The red planet has long been associated with alien life.
Since the days of Percival Lowell and his ideas on the red planet which were published in the popular books “Mars" (1895), "Mars and Its Canals" (1906), and "Mars As the Abode of Life" (1908).
The fourth planet from the Sun and the second-smallest planet in the Solar System has been considered the best bet for life or the remnants of life in our solar system.
We have for decades been sending probes and videoing and photographing the planet for many areas.
Many of the images have turned up what many call evidence that the red planet may have once been home to a long since extinct civilization.
Let’s take a look 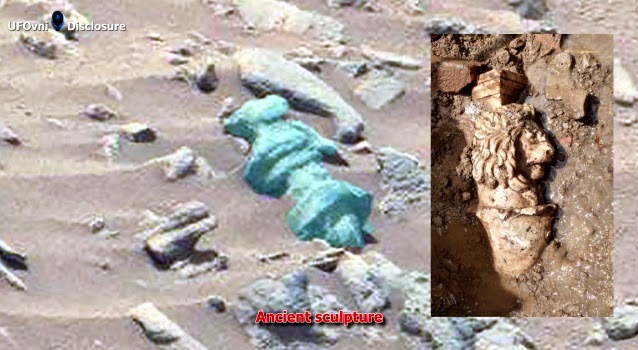 We start back in the 1970s with the two Viking robots sent to Mars.
Viking 1 and Viking 2 touched down on the red dust of Mars 40 years ago, the plan for these probes was to gather evidence of organic carbon-based life. They would do this by taking samples of the soil and searching for telltale molecules in the dirt that would show if there was life on the planet then or in the past. The team running this program were very confident they would find something.
They didn’t,
Both of these probes failed to find anything in the Martian soil. This is when conspiracy creeps into the story as NASA's Curiosity rover confirmed the presence of organic molecules on Mars, so what were the Viking robots missing or were the results being hidden?
Strangely after this underwhelming event activity on the planet ramped up. The search for life on the red planet seems to increase with a real sense of urgency. The planet now hosts a number of Rovers which are searching, mapping, and documenting the planet's surface, over a dozen orbiters circle the Mars. The planet is being surveyed and many believe this surveying has turned up some amazing images which prove there is life on the red rock or at least that there once was.
At a conference in the Netherlands, an audience of Mars experts were asked about Martian life. Some 75 percent of the scientists said they thought life once existed there, and of them, 25 percent think that Mars harbours life today.
So what evidence has been leaked?
What images have these scientist seen that convinces them of life on the planet?
Were extraterrestrials, space crabs AND a Martian scorpion snapped by these Nasa Rovers?
Those that follow the belief in alien life have been celebrating recent images as proof that there is life on our red neighbour. They believe that we may be seeing the slow disclosure of alien life living in our solar system.
Scott C Waring, the editor of UFO Sightings Daily, posted pictures of what he claimed to be actual humanoid beings, a "giant hermit crab' and a scorpion on the planet.
The images Mr Waring points to as proof were snapped by the Curiosity rover and uploaded to the internet. 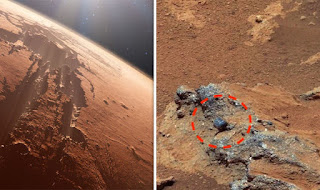 After spending much time reviewing these pictures the ufologists claimed to have found a photograph of a "hermit crab". This oddly enough was not the first time a shelled crustacean-like animal has been pictured on the planet.
Within a few weeks, a couple of images from the rover reportedly showed a crab-like creature visible in pictures of the Martian surface.
This is not the only Arthropod like animal captured Waring also claims to have found evidence of a scorpion on Mars.
But it’s not only invertebrate, exoskeletoned, segmented bodied, creatures he sees.
After many hours searching through images he says that he has found "an old man on a chair," a "tiny alien hiding behind a small structure," a "humanoid figure," "an alien skull," and a "foot of a petrified alien or statue," and many other things all of which are denied by the space agency responsible for these pictures.
Waring is not alone in his belief that he has found a smoking gun in these pictures.
The YouTube channel ArtAlienTV showed in a video titled “Mars Burial Uncovered – an alleged partially mummified skull”
In the video, Mr White the owner of the channel talks about how upwards of 30 skulls have been found in pictures of Mars.
A picture that the man says is 100% undeniable comes from NASA’S Spirit Rover. This Rover gathered many images since it first touched down on Mars in 2004 and remained active until 2010.
Spirit took a total of 128,224 photos which are freely available to see online go take a look and see if you can find something anomalous.
But what are the odds the NASA photos are anything more than just over-analyzed pictures of oddly-shaped rock formations?
NASA claims that all these images are nothing more than tricks of the light or the human brain seeing things that aren’t there. The brain looking for patterns in inanimate objects is common, and it has a name: pareidolia. This is a psychological phenomenon that causes the human brain to lend significance to random patterns.
This is what many of those that do not believe Waring point to an answer.
They say that his claims of objects ranging from aliens to dinosaur bones are nothing more than rock, they highlight the fact that in many of the picture the colour of the object and the colour of the rock is the same this because the objects are rock.
The discovery of an ancient Martian artefact is all in the mind of the ufologists.
However, Mr Waring has gathered some support.
A comment on one of his posts reads: "I Can easily see what you described Scott, this is great stuff. Keep up the good work, love what you're doing, this site is brilliant."
So Do the NASA pictures that Mr. waring inspected show alien fossils?
Could he have leaked evidence before NASA had planned?
Maybe,
NASA’s recently sparked intense speculation that the US space agency is preparing to unveil the proof of alien life on the Red Planet.
The proof they have….. You guessed it …….The NASA Rover pictures and the snaps of alien fossils buried in the soil of the Red Planet.
Space enthusiasts from around the world were invited to a press conference involving NASA’s top scientific minds.
This created much speculation that NASA had pictures of alien life on the planet and they were about to disclose them.
As we know this did not happen and sadly we still wait for the space agency to admit publically what many know privately, to be true.
Do not be disheartened, someone on the Internet did find a place where a meteor had struck Mars while they were roaming through the catalogue images, so that is pretty fantastic and shows the pictures hold secrets that have yet to be found.
This brings us to the recent discovery of what many claim to be the best evidence yet that the red planet had intelligent life in the past.
March 2019 a piece of sheet metal with a perfect circle through it was posted on the Youtube channel WhatsUpInTheSky37 another channel operated and ran by Scott Waring.
The appearance of his object is almost perfect the circle has not been cut but rather designed into it as we see the smooth edges.

Mr, Waring said he was going through the Anomaly groups today on facebook and came across a post by Shamus that had Neville Thompson’s Gigapan for SOL 2013 and this odd piece of what looks to be a Manufactured item all twisted up and destroyed was found.
This is when he decided he had to share this with everyone and see what they thought.
He claimed that the object was not from the rover since there are no tracks around it.
In the full GigaPan (high-resolution, interactive gigapixel panoramic images) you can see the metal fragment even clearer.
So tell me what you think this is?
Do this metal shard and the fossil images prove life existed on the red planet?
Do you think NASA is hiding evidence?
Let me know in the comments below.