The field of cryptozoology has a number of creatures that have gone mainstream among these is a creature that first popped up in South America.
This beast has left a trail of carcasses in its wake.
Explanations of what or where this creature came from range from the fantastical to the mundane.
At various points in the documented history of this beast, it has been everything from an extraterrestrial to a government experiment gone wrong.
The evidence has steadily built over the years and there is more than the usual grainy photos and unreliable witness reports for us to look at.
So what creature am I talking about?
The goat sucker or el chupacabra as it is known in Spanish 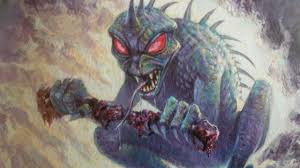 The stories of the chupacabra first emerged back in the 1990s, reports from the Puerto Rican jungle told of an animal which was described as being bipedal, four or five feet tall with large eyes, spikes down its back, and possessing long claws.
The chupacabra was responsible for a number of animal attacks in which it reportedly drained livestock of their blood thus earning its name “goat sucker.”
The story and the creature spread quickly moving from the South American countries to the northern United States.
One odd thing is that as the story spread the animal slowly morphed into another creature.
The description of what could almost be regarded as an alien animal changed into something more recognizable.
The green skin, red eyes, and quill filled back were replaced by a hairless canine-like cryptid which was often spotted and filmed.

So let’s look at a few of the explanations for the beast and ask if what many claims to be the chupacabra today is the same creature which first started the legend.

Beginning at the end of the story we can look at the chupacabra bodies that have been collected from the southwestern U.S.
These animals are quite horrific-looking: hairless, with a gaunt appearance and burnt-looking skin.
Here is when Science steps in to help with the identification of the creature.
DNA is taken and analyzed.
Most of the dead creatures are identified, but the claimed chupacabra remains are more than one type of animal.
DNA helped to identify these chupacabras as a range of creatures everything from dogs, racoons and even a fish, to the most commonly found animal identified as a chupacabra the coyote.
So why do these animals look so different from the animals we are used to seeing?
That’s down to Sarcoptic mange.
This disease is more commonly known as just ‘mange’ and it can affect the appearance of an infected animal quite drastically.
Sarcoptic mange is caused by itch-inducing mites called Sarcoptes scabei burrowing into the upper layer of the skin where they secrete eggs and waste material.
An inflammatory response from the immune system is then triggered.
The inflammatory skin condition producing a convincing monster.
This little mite may have been responsible for creating more monsters then the chupacabra, the insect once infected humanity. Can you imagine a human being infected with mange?
The balding, red and black thickened skin would give a person a monstrous appearance and in times of old when the cause was unknown it could change a person into a monster and maybe give rise to few legends.
Thankfully today we have developed a natural genetic immunity, a scientist theorizes this is why the little mite moved to canines.
From dogs, it spread out into the wild and began to migrate to other creatures. This spread across species could lead to many animals we used to seeing with fur becoming bald and maybe this leads to many misidentified cryptid sightings.
But let’s get back to our friend the goat sucker.
This idea of a mangy coyote being the truth behind the legend has its supporters but those that know the history of the cryptid say “no.”
This is not the same creature reported in the original attacks. The 200 original chupacabra reports from Puerto Rico in 1995 described a decidedly un-canine creature.
The original chupacabra had spikes on its back and big red eyes.
Puerto Ricans believe the cryptid to be the result of American exploitation and meddling; the result of top-secret US scientific experiments taking place in El Yunque rainforest.
This idea often reports a group of monkeys which escaped a US research facility. These Rhesus monkeys had been tampered with on a genetic level this altering their appearance to that of the monster we know as the chupacabra.
Maybe these animals had mange, the mite coming full circle to once again find a primate host!
The blood-sucking is not so easily explained, and while we are talking of bloodsucking that leads us into maybe some of the best evidence for the chupacabra.
The bodies of its victims.
The livestock the cryptid is said to have fed upon display the same telltale signs.
Puncture marks on their neck and the draining of every drop of blood from the body.
Sceptics say that this is easily explainable pointing out that these animals are most likely the victims of ordinary predators, such as dogs or other canids. They say that dogs will often attack livestock when playing, often biting the neck and then running off, these unfortunate animals then succumb to internal haemorrhaging from the injury inflicted by the dog.
So what happens to all that haemorrhaged blood?
When an animal dies, the heart and blood pressure stop the blood seeps to the lowest part of the body, and it coagulates and thickens giving the illusion that they've been drained of blood.
This is known as lividity.
So we don’t seem to have any clear answers from the remains of supposed chupacabra or their animal prey.
This may just be about to change with a man that it has been claimed is the first human victim of the cryptid.
The unexplained death of a labourer in the village of El Naranjo was reported and the locals are putting the blame squarely on the goat-sucker.
A local man was discovered dead and drained of all his blood, the assailant was unseen.
Those that witnessed the man’s last few hours of living said he had been resting under a tree when the attack happened.
They believe the legendary Chupacabra was responsible.
The Chupacabra normally prefers to attack livestock rather than attacking people, or could this be a new twist in the story of the mystery animal.
Has the chupacabra decided to change its diet?
Could we see a resurgence in attacks and new sightings?
As of yet, the authorities in the region have yet to give any official explanation for the man's death.
This increasing the fear and speculation among the locals.
So what do you think, is the chupacabra an alien a failed American experiment or just a mangy dog?
Let me know what you think in the comments below.