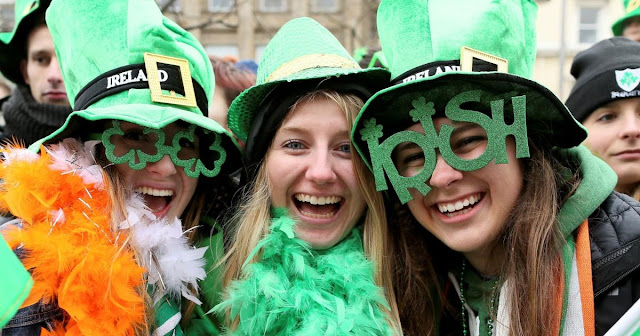 A happy St Patrick’s Day to you all.
It’s time to celebrate all things green watch a parade or two and maybe indulge in a couple of libations
So I thought I would join the celebration with a quick video on what else but.
Leprechauns.
Let’s take a look at the little gold obsessed Irish fairies
And of course ask if they are real

The tiny, fairy-like creature is a mainstay of Irish mythology and the little man’s popularity sky rockets around St. Patrick's Day.
The word "leprechaun" actually originates from the old Irish term "luchorpán," a combination of the words lu, meaning small, and corp, meaning body.
This is why they are also known as the wee folk. “Wee meaning small”
Though they may be slight of height, according to legends leprechauns are notorious tricksters.
They are known as shoemakers (cobblers), who like to hide in woods and avoid humans.
People often search for and try to catch leprechauns because they're said to have treasure, pots of gold they guard furiously.
They are said to have the ability to grant wishes. Are leprechauns just fiction?
There is a place where we can find out, irelandseye.com has a Leprechaun watch. The Ireland focused site documents sighting of the little men in their home country
In this first video we see the emerald isles beautiful countryside. The video was shot on St Patrick’s Day and if you watch carefully a little creature or possibly leprechaun can be seen entering the frame at the 8 second mark. It shoots across the field what do you think it was?
I can’t see it myself!!

The next video taken from the site was shot using time lapse and covers a 24 hour period.
In this clip we see various creatures cavorting near the woods, the website claims that they are not the Irish Fairy if that’s the case why include the video on the page?
The Irish people have spread across the globe, taking their culture with them.
The U.S having so many people of Irish decent probably holds the largest St Patrick’s celebrations outside of The Land of Saints and Scholars.
This has seen the Leprechaun spreading to the USA and other countries.
A report comes from a witness in Puerto Rico. The 17 year old claimed that one day he had entered his bathroom in order to take a shower, he then suddenly heard the family dog manically barking at something which was outside of his home.
The boy decided to leave the shower and go check out what the noise was all about going outside of the house he saw something far weirder than what he had perhaps been expecting.
In the garden of the property hiding behind a tree was a little man dressed completely in white, and complete with a white cone-shaped hat and white, pointed shoes.
The boy and the “wee man” stared at one another for a few moments, the boy searching his mind for an answer.
Then the small creature just vanished into thin never to be seen again.
Was this leprechaun or possibly a creature closely related like a gnome?
We took a look at gnomes in the video linked above.
I guess we will never know.
Moving on to probably the most famous case of a leprechaun sighting ever.
This story went viral gaining millions of views on online but it has long since been revealed as a hoax.
A prank played by a local man that was a little more successful than he had anticipated.
So grab a Shamrock Shake whip up a batch of fresh Bailey’s brownies. Grab four leaf clover and head out to the party.
Have a happy St Patrick’s Day
And as they say in Ireland
May you live as long as you want and never want as long as you live.
at March 17, 2019