The flying spaghetti monster was created as a satirical look at the idea of religion the book written by Bobby Henderson parodies peoples belief in an all-knowing all-seeing being living in the sky.
Those that worship the Flying Spaghetti Monster are known as Pastafarians.
But the joke may have just backfired.
The flying spaghetti monster a deity that was pure fiction may have just been proven real.
A recent cryptid story reported creatures that have an uncanny resemblance to the pasta god.
Let’s take a look at what was seen 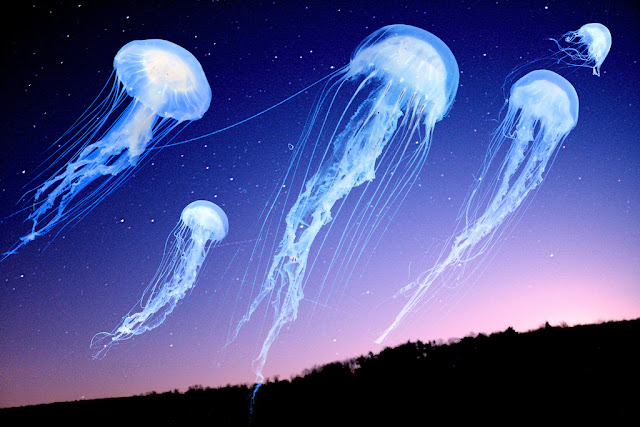 A story I recently came across penned by cryptid specialist Brett Swancer on the excellent website mysterious universe.
Tells about Strange Encounters with Flying Jellyfish, which look remarkably like the flying spaghetti monster.

His collection of very weird encounters with these creatures described as jellyfish that float in the sky cites witnesses from around the world.
The writer documents a number of reports. These tales tell of incredibly bizarre animals reported as looking like typical jellyfish, these jelly fish are not found in the oceans but instead soaring through the air.
These jelly birds, we can’t really call them fish when they are not in the water, show some peculiar abilities. They are able to change the density, colour, or size, of their bodies.
At times they become completely transparent, and sometimes they show bioluminescence, glowing like Chinese lanterns.
The jellyfish (jelly birds) move through the air under their own propulsion, how they do this is not known. They could be riding air currents like spiders or maybe they have some form of locomotion that until we capture one of these cryptids we just can’t understand.
What is known is that if you spot one of these anomalous creatures the experience is said to be otherworldly.
So what interactions have been reported?
The first Brett gives us is from England in 1950. A police man reported seeing a low flying jellyfish whilst patrolling on his bicycle.
The officer told of how the animal drifted down from the sky coming to be directly in front of him, so close that he actually bumped into it.
He said that the animal was extremely soft comparing its feel to that of a soft blanket, one odd thing is the jellyfish gave off an odour, an odour the policeman said reminded him of the smell of mildew.
A few years later in 1958, a report surfaced from Florida, another police officer, one Faustin Gallegos came upon a translucent purple blob which he said was about the same size as a soccer ball.
This interaction is slightly sad as the police man said it seemed that the animal was dying. When he attempted to help it and pick it up from the ground it evaporated in his hands.
It would seem that these animals are not seen again for a few years with the next report coming from Australia in 2012.
The witness who was outside of his property when he noticed a strange pattern in the sky above his home, this pattern looked like stars shining and shimmering in the daylight.
As with the policemen, the jellyfish moved silently above confusing the man, it gracefully and slowly moved through the air showing deliberate movement.
This story has credibility because the man was not the only witness. The unknown creature was reported by others in a nearby area. These other witnesses describing the exact same balloon sized flying jellyfish.
Is there any chance we could identify these cryptids?

The government has looked into the phenomena

A report found on the site Normal blogs, has a report from a man whose uncle worked for the government of the US. After a rash of sightings in the San Francisco area.
The government ordered an investigation. Starting in the 1950s and lasting for a decade.
This investigation gave the creatures the name  “Space Jellies,” it found that these animals tended to congregate in the upper atmosphere along the coast, once they formed a group they would soar up into the upper atmosphere and out of sight.
Their movement was theorized to be part of a seasonal migration pattern in the western Pacific.
The story goes on to describe how these animals were monitored and documented. This survey finally culminating in the attempted capture of a “spacejelly” all attempts failed and as with the second story and the man who tried to help a dying jelly, when these things were touched the dissolved into steam like smoke.

The article goes on to tell of a number of other sightings and interactions with a very large space jelly In December of 1999.

The two witnesses described a tubular creature that was of blue and red colour, and exhibited a somewhat transparent quality, also what looked to be some sort of flickering bioluminescence.

These witnesses insisted that it was a living creature, saying it somewhat resembled an animal known as the glass squid (Cranchiidae).

It would seem we have some good eyewitness testimony so what could these creatures be?
It has been proposed that these creatures are some sort of “atmospheric beast.” These creatures live in the atmosphere much in the same way as jellyfish live in the seas.
That would make sense life does spread into all available and suitable space it can. Why is it that the sky or the atmosphere would not be populated?
Birds and other flying creatures do use the atmosphere but their lifecycle is still tied to the land. Space jellies would seem to live their whole lifecycle in the air.
Described as amorphous and cloud-like behemoths, finned squid-like creatures, floating jellyfish, translucent, vaporous blobs, flitting rods, amoeba-like organisms, and gelatinous oddities.
These creatures having bodies that are semi-solid, or almost insubstantial, with some reports even claiming that they are able to adjust their density from almost immaterial and invisible to more solid, most likely they suspend themselves in the air, using air bladders much like the swim bladders found in fish or that they have very low body densities enabling them to float.
The sizes of atmospheric beasts do vary greatly from tiny to huge some being monsters of hundreds of feet long.
Over the years there have been many stories which tell of unusual flying monsters. These stories break away from traditional flying beasts like Thunderbirds and other flying cryptids.
These atmospheric life forms have even allegedly been photographed, and there have been reports of the gelatinous remains of dead ones on rare occasion.
Are such sightings evidence of a type of lifeform unknown to mainstream science?
What do you think these space jellies are?

Have you ever seen a space jelly?