The internet is once again buzzing with the rumor of a coming Cataclysm, this global killer is named ‘the death planet’ and its arrival is said to be IMMINENT!
Conspiracy theorists have made the claim the recent rise in earthquakes and volcanic eruptions along with the crazy weather many have been experiencing of late is all because  the Earth is about to get a visitor.
This visitor comes in the form of a ninth planet, planet x or as its better known Nibiru.
These claims say that the gravitational pull of Nibiru has increased the frequency of these natural events as the planet's path brings it ever closer to Earth.
So what is Nibiru and has it made its way into our solar system? 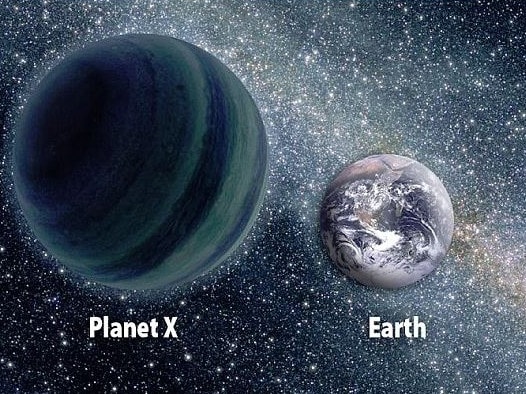 Rabbi Yuval Ovadia, a man who can claim hundreds of thousands of views on YouTube, has been urging people of the Jewish faith  to return to their home, Israel. This to prepare for the arriving apocalypse.
He recently posted a video in which he says these natural disasters prove Nibiru is on its way.
So what is Nibiru and what is its history and should we be worried?
The story begins with a group of extraterrestrials named the Annunaki.
The Annunaki are said to be a legendary race who can be found in the oldest writings of mankind.
This alien civilization inhabit the outermost planet of the solar system, this planet is said to orbit our sun in an elliptical orbit. When this orbit brings the planet closest to earth chaos is said to ensue.
This is what brings us to today with Many researchers claiming that the orbit has once again reached the point when this planet comes close to our own.
Zecharia Sitchin, author of the Earth Chronicles, wrote extensively on the Anunnaki and the visits they had made to our planet.
The Anunnaki  are claimed to be the real gods of old creating humanity to work as a slave race to mine gold for them maybe we can take a deeper look at that another time let me know in the comments if that is something you would be interested in?
Sitchin, theorized Nibirus return after studying a number of historical records, scientific cycles and mathematical formulas that relating to planetary time and orbits.
He also worked advanced geometry, and his interpretation of complex messages found in crop circles.


So what does modern science have to say about this impeding threat?
The Mysterious orbits of objects in outermost reaches of the solar system are not caused by a Ninth planet'
These strange orbits that are exhibited by objects in the farthest most reaches of our solar system, can be explained by the combined gravitational force of small objects orbiting the sun beyond Neptune, researchers said when they hypothesized ninth planet.
That being said an alternative explanation for the 'Planet Nine' hypothesis, has been put forward by researchers at the University of Cambridge and the American University of Beirut.
In this theory the scientist propose that there is a disc made up of small icy bodies that has a combined mass as much as ten times that of Earth.
When combined with a simplified model of the solar system, the gravitational forces of the hypothesized disc can account for the unusual orbital architecture exhibited by some objects at the outer reaches of the solar system.
the new theory may not be the first to propose that the gravitational forces of a massive disc made of small objects could avoid the need for a ninth planet, it is however the first theory in which an explanation for the significant features of the observed orbits while accounting for the mass and gravity of the other eight planets in our solar system is given.
Beyond the orbit of Neptune lies the Kuiper Belt, the belt is made up of small bodies left over from the formation of the solar system.
Neptune and the other massive planets gravitationally influence the objects found in the Kuiper Belt.
Collectively they are known as trans-Neptunian Objects (TNOs), they encircle the Sun on nearly-circular paths from almost all directions.
Astronomers have discovered mysterious outliers.
Going all the way back to 2003, around 30 TNOs which follow a highly elliptical orbit have been seen.
These TNOs are unusual because they are sharing, on average, the same spatial orientation. This type of clustering cannot be easily explained by our existing eight-planet solar system.
This anomaly has led some astronomers to hypothesize that the unusual orbits may well be influenced by the existence of an as-yet-unknown ninth planet.
Well, maybe that planet is known, and it is the Anunnaki home world we have been warned about throughout history.
The 'Planet Nine' hypothesis suggests we can account for the unusual orbits of these TNOs, with a ninth planet.
this planet would need to be about ten times larger than Earth, lurking in the far reaches of the solar system 'shepherding' the trans-Neptunian Objects to follow the same direction through the combined influence of its gravity and that of the rest of the solar system.
Applied Mathematics and Theoretical Physics are looking into finding a less dramatic cause for the gravitational pattern.
This is when they, rather than allowing for a ninth planet, and then worrying about its formation and unusual orbit, they simply accounted for the gravity of small objects constituting a disc beyond the orbit of Neptune.
This idea being based on mathematical calculations not observations, this could mean that in terms of proven fact it has less evidence than Nibiru.
Nibiru does have thousands of years of legends tied to it, something lacking from this new idea of an ice disc.
The Nibiru Cataclysm is said to follow a 3600 year cycle the Annunaki, home world was last said to be this close to the earth during the time of the Great Flood.

And talking of the biblical flood there is an astonishing consistency in religious texts and mythologies from around the world which talk of planet x, sometimes using different names but all the stories share the same basic core.
This brings us to the internet story we opened with is Rabbi Yuval Ovadia correct?
Many say yes, a group known as the Nibiru truthers claim that Nasa is part of a global conspiracy to "hide the truth" this to stop mass panic while the 'global elite' escape to the safety of secret underground bunkers.
If Nibiru is real and is indeed in a long orbit, its return inevitable, can we find proof of the conspiracy to hide its reappearance?
Many have supported the idea of “Nibiru cataclysm.”  Nancy Lieder founder of ZetaTalk popularized the idea in the 90’s, Lars von Triers 2011 film Melacholia also helped bring the topic to wider public awareness. The “disaster porn” that was the movie 2012 back in 2009 also played its part in raising awareness of Planet X.
There has only been two true planets discovered since ancient times Nibiru would be the third.
It's possible that both ideas could be true -- there could be a massive disc and a ninth planet.
Do you believe in the existence of a ninth planet?
Do you think that planet quickly approaches?
Could it be the cause for the increase in natural disasters around the planet?
Let me know your thoughts in the comment s below
at February 13, 2019